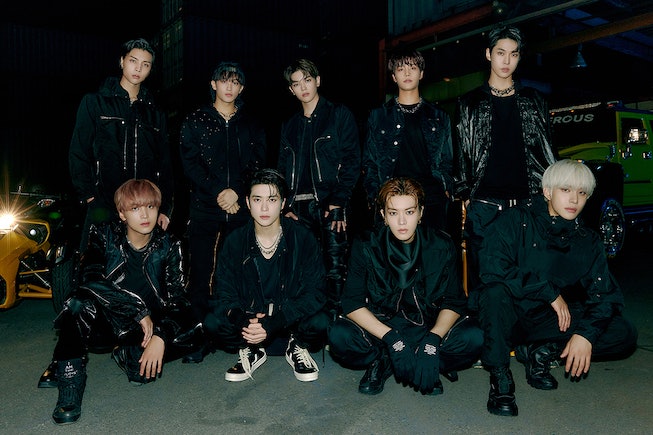 When NCT 127 first made their debut with “Fire Truck” back in 2016, the song was a refreshing dose of adrenaline that interrupted the Korean music scene. Six years later, the charismatic members — TAEIL, JOHNNY, TAEYONG, YUTA, DOYOUNG, JAEHYUN, JUNGWOO, MARK, and HAECHAN — have returned with their fourth studio album, 질주 (2 Baddies), which proves to be even more experimental.

The 12-track album is not only an heir to their eccentric music sounds but a reintroduction to who NCT 127 truly are, in case you didn’t get the memo: They’re charismatic and confident, and they’re not afraid to get loud with it. Its songs explore a range of genres from hip hop and R&B to electronic dance and their go-to pop melodies. Tracks like “Faster” kick off the album with an instant explosion on the ears, though NCT 127 soon soothes the wound with a balance of rhythmic blues. “A lot say NCT’s music is “fresh,” and I think this is a huge plus to us,” Haechan tells NYLON over email. “We have great pride in our music as well, so we’re always trying to put out music that’s new and yet could be loved by many others.”

NCT 127 was last on our radar with their 2021 album, Sticker. In support of the new record, the boy band will embark on the NCT 127 2nd Tour: Neo City - The Link come October, with tour stops in Los Angeles and Newark, New Jersey, and more shows to be announced in the coming months. “Our concert itself will be re-established to the newest version and songs from our latest album will be added,” Mark says. “That’s a new feeling for all of us when we go on tour, so that’s definitely something to look forward to.”

Read on as NCT 127 spoke exclusively with NYLON about all things 질주 (2 Baddies), their favorite moments from filming the title track’s music video, the most challenging songs to record from the album, the upcoming U.S. tour, and more.

This interview has been lightly condensed and edited for clarity.

How are you all feeling to be releasing this new album and its title track?

TAEIL: I’m looking forward to all the promotional activities around this album as I’m very satisfied with the result. I think our fans will really enjoy and love it too.

JAEHYUN: I'm looking forward to it more than ever, and just want to run in full speed (질주) with NCTzen!

If you had to describe “질주 (2 Baddies)” in just 3 words, what would they be and why?

YUTA: Powerful. As seen from the title “질주,” meaning “full speed,” the song hints to be a powerful sound. Visual. It showcases a style only we can do. Performance. It’s a song that could show the stronger yet cool side of us.

Could you walk through the meaning behind “질주 (2 Baddies)?” What does the track mean to you?

TAEYONG: I think it’s similar to the famous quote “ride or die” from The Fast and the Furious movie. For us, “질주 (2 Baddies)” is presenting our performance at full speed on stage with our own color.

What's your favorite line from the song, if you had to choose?

JOHNNY: I like this line: “I don’t know what you sayin’/ Look at the coolness as it is Don & Manner.” I really like the message of, “Let’s not worry about others and fully show my swag.”

JAEHYUN: “After you feel the best/ Your world is gonna change.” As for the lyrics itself, I hope people feel that way after seeing us and our performances.

What was the concept behind the “질주 (2 Baddies)” music video? Are there any favorite moments that we should watch out for?

DOYOUNG: I think the speedy music video and the concept that suits the song was important. You keep running and heading towards something, and before you know it, the music video is over. You’ll get to meet NCT 127 more confident than ever.

YUTA: The music video is awesome from beginning to end. The concept is super powerful and each member’s charm was presented in its own unique way, so I hope everyone could focus on the individuals as well as the group.

What were your favorite off-screen moments while filming for the music video?

MARK: My personal off-screen favorite moment was during my facial tattoo drawing session. We had a professional tattoo illustrator to draw out the drawings/marks on my face, and it really enhanced the intensity of my look for my solo cut. I’ve never seen my face with that many markings, and I remember the members jokingly telling me to actually get them tattooed on my face for real. It was interesting to be a part of the whole process.

If you had to choose a scene or part aside from your own, which member do you think had the most interesting and/or challenging part in the MV or song?

JUNGWOO: I think Yuta pulled off the swaggy vibe of the song very well. Since he’s so naturally good at giving out those vibes, I thought he was so cool. The song suits him perfectly!

The album experiments with different sounds from techno to R&B. How important is it for you all as NCT 127 to do so?

HAECHAN: A lot say NCT’s music is “fresh,” and I think this is a huge plus to us. We have great pride in our music as well, so we’re always trying to put out music that’s new and yet could be loved by many others.

“I hope the fans could think, ‘Yeah, this is why I like NCT 127,’ since this is the most powerful and NCT 127-like album than ever before.”

What main takeaway do you want fans to have by the end of the album?

DOYOUNG: I hope the fans could think, “Yeah, this is why I like NCT 127,” since this is the most powerful and NCT 127-like album than ever before.

What were the most difficult tracks to record on the album?

HAECHAN: I would have to say “질주 (2 Baddies).” I worked even harder since it’s the title track, but also put extra thoughts into it when recording as I wanted an output that both the director and I could be satisfied with.

TAEIL: “1,2,7 (Time Stops)” is a track easy on the ear, but requires a high range of vocal sounds, so it was tough when recording the soft high-pitched part. I think the result came out well as much as I have put effort into it.

Are there any moments for your upcoming shows in L.A. and Newark that you're most looking forward to?

JOHNNY: I’m excited to meet our fans overseas and share the happiness in the same space after a long while. I want to thank our fans who waited for us throughout the time, and we’ll also work hard to prepare as much, so please look forward to it!

TAEYONG: It’s been about three years since our last visit, so I’m very much looking forward to it.

MARK: Our concert itself will be re-established to the newest version and songs from our latest album will be added. That’s a new feeling for all of us when we go on tour, so that’s definitely something to look forward to. But aside from the tour, we’re actually already in the making of new music that’s planned to come out almost right after 질주 (2 baddies) — a totally different vibe.