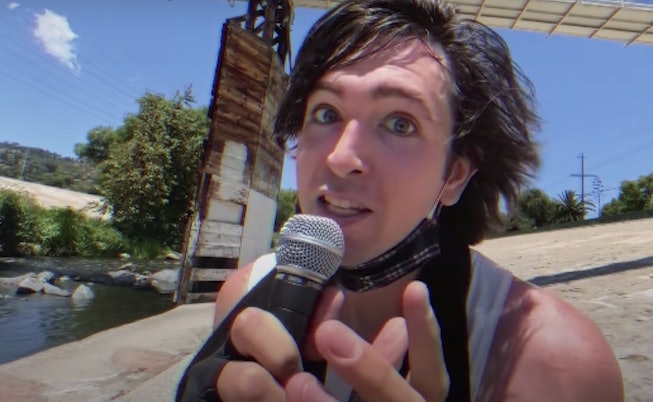 Dating during an ongoing global pandemic has its challenges. Succession actor Nicholas Braun, a.k.a. Cousin Greg, does not need to be reminded of this — he recently recorded "Antibodies (Do You Have The)," a cheeky pop-punk song that details the longing, fear, and horniness of looking for love during a plague.

“My friends are a couple and they’ve been together for years, but I was back there sort of being like, ‘Man, I wish I had somebody right now to go through this with,'” Braun told Rolling Stone alongside the song's premiere. “And so this girl and I were talking and we were like, ‘Maybe we should go meet up and go for a walk — with bandanas on.’ So I went on this quarantine date; it sort of felt secret because I didn’t want my friends to know. And I guess the combination of paranoia and romance is what the song is about.”

Braun crowdsourced his idea to his Instagram following who sent over hundreds of interpretations back to the actor. One of the replies was an A&R from Atlantic records, who encouraged Braun to make the song actually happen. After recruiting producer Colin Brittain — who's previously worked with Papa Roach, Dashboard Confessional, and 5 Seconds of Summer — Braun turned up the pop-punk dial. He nailed the part of forlorn emo rockers of yesteryear, complete with fingerless gloves, black eyeliner, and some long, side-swept hair to bring the visuals to his nasally, longing wails about looking for his antibodies-confirmed dream girl.