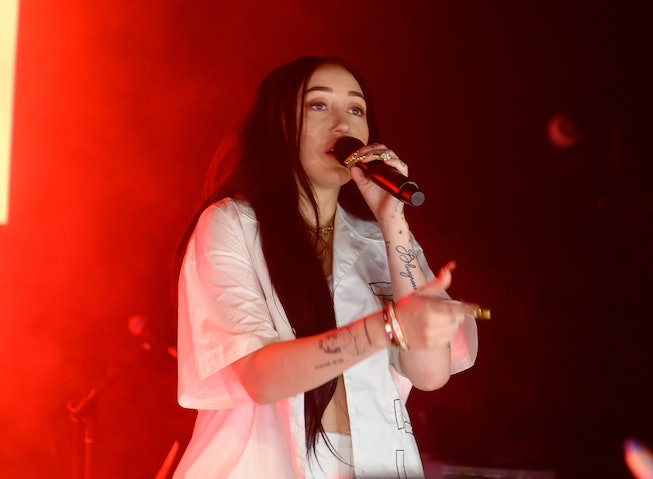 Growing up with siblings is tough business. Growing up when your sibling is a world-famous actress and pop star on the Disney Channel — well, surely that's an entirely different beast. But it's exactly the experience that Noah Cyrus, sister to Miley Cyrus and now burgeoning star in her own right, opened up about in an honest new interview with Variety. Noah revealed that Miley's early stardom invited a harsh spotlight onto the Cyrus family — and onto herself, specifically — and as a result she struggled a lot with insecurities about her appearance growing up.

"I remember not being able to look in the mirror without tears welling up in my eyes," Cyrus told Variety. "I had no confidence. How are you supposed to when everyone is telling you that you're ugly?"

Cyrus explained that being exposed to that kind of scrutiny at a young age took a toll on her identity when she was still trying to figure out who she was. She expands on what it was like on her latest EP, The End Of Everything, where on the vulnerable "Young & Sad" she sings: "My sister's like sunshine/ Always bringing good light/ Wherever she will go/ Yet I was born on rain clouds/ When they blew the flame out/ Blessed in her shadows."

"For people who complain about what I wrote about in that song, I always want to be like, ‘Shut the f— up, because you didn’t live it," Cyrus told Variety. "You don’t know the pain that came with it. You only saw the good side of things."

Cyrus has previously talked about the difficulties of growing up in Miley's shadow. In an exclusive Zoom listening party for her latest project, she teared up while talking about "Young & Sad," saying: "I always felt like I was that person that no one gave a shit about due to what people said to me online," and that the experience was "unbearable."

Cyrus released The End Of Everything EP back in May 2020. The young singer is reportedly now working on her debut album, according to Variety, and in the process of starting a podcast called "In My Feels" with Lou Al-chamaa, Sony's VP of A&R. Revisit Cyrus' exclusive playlist for NYLON, here.

NEXT UP
Entertainment
On "Flowers," Miley Cyrus Is Still In The Throes Of Moving On
Entertainment
Bad Bunny, Lizzo, Kim Petras Will Perform At The 2023 Grammys
Entertainment
Brendon Urie Officially Disbands Panic! At The Disco
Entertainment
Rihanna, Mitski, Lady Gaga Nominated For 2023 Oscars