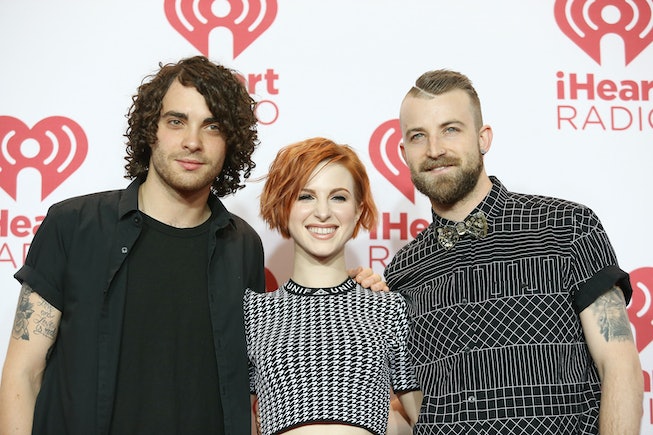 Paramore’s North American This Is Why tour officially kicked off in Bakersfield, CA this Saturday, and their first show came with a huge surprise. The band played its infamous hit, “Misery Business,” after first banning it from their setlist four years ago.

“Misery Business” was released in 2007, and was written by lead singer Hayley Williams when she was 17 years old. The brooding track berates her crush’s girlfriend, whom she believes to be manipulative. It quickly became Paramore’s most popular song, but in recent years the lyrics were called into question — specifically the second verse where Williams sings, “Once a whore, you’re nothing more / I’m sorry that’ll never change.” Social media critics of the song called it anti-feminist, which ultimately led Paramore to remove the track from their live shows.

The last time Paramore sang “Misery Business” together was in Nashville during their After Laughter tour in 2018. While on stage, Williams explained the band didn’t feel aligned with the song's message. “This is a choice that we have made, because we feel that we should,” she said. “We feel like it's time to move away from it for a little while.” Before she began singing, Williams dedicated the track to “every bad decision that led us here.”

Williams reaffirmed the decision in 2020 after “Misery Business” was included on a Spotify Women in Rock playlist, saying, “I know it’s one of the band’s biggest songs but it shouldn’t be used to promote anything having to do with female empowerment or solidarity.” The song was removed from the playlist.

Williams did, however, recently revive the track at Coachella with Billie Eilish this year, with the duo singing “Misery Business” as an acoustic duet. Williams revealed she originally tried to convince Eilish not to cover the song before changing her mind. “It shouldn’t be about me,” Williams said. “People grow and learn. I’d already called myself out and done a lot of work on the misogyny I’d metabolized as a young girl.”

Now that the backlash has quieted, Paramore has decided to embrace the song. At their October 2nd show, Williams said, “Four years ago, we said were gonna retire this song for a little while, and I guess technically we did! But what we did not know was that just about five minutes after I got canceled for saying the word ‘whore’ in a song, all of TikTok decided that it was OK. Make it make sense.”

“I remember a time when we had a MySpace and we were still a really small band,” she continued. “We were really small. We hadn’t even put out this song and we had noticed that kids were calling themselves ‘Parawhores.’ We were like, ‘Eugh, that’s weird!’ But I guess what I’m trying to say is, it’s a word, and if you’re cool you won’t call a woman a whore because that’s bullshit.”

“We can all learn from ourselves, right?” she concluded. “Just for the record, 90 percent of you said whore tonight. That’s all I’m gonna say — I’m not gonna preach about it. I’m just gonna say thank you for being nostalgic about this because this is one of the coolest moments of our show and it’s very nice to feel like there’s a reason to bring it back that’s positive.”