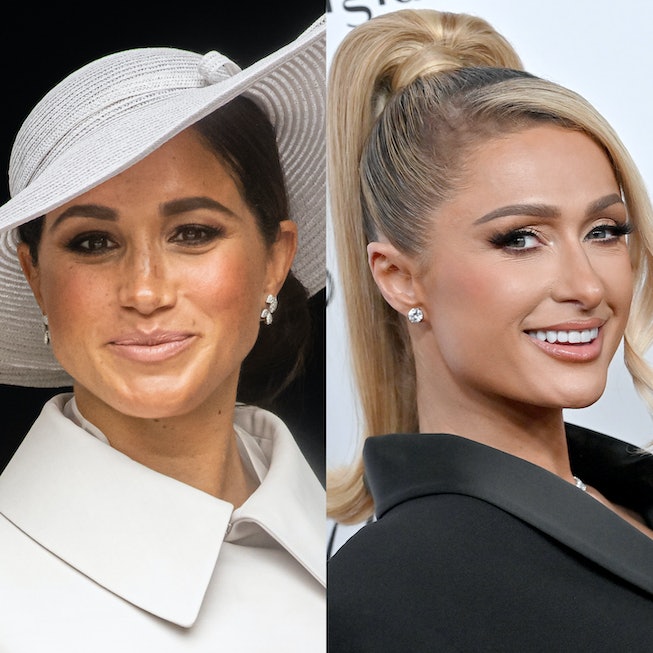 Meghan Markle invited Paris Hilton onto her podcast, Archetypes, to discuss being labeled as a “bimbo” and “dumb blonde.” During the show — which breakdowns harmful stereotypes thrown at women — the two media moguls discussed Hilton’s traumatizing boarding school experience and how that led to the Barbie-like persona she’s known for.

At the beginning of the interview, they discussed how tabloids often referred to Hilton as a “dumb blonde” due to her privileged upbringing and appearance. “Was there ever a moment where you heard it so much that you just had to buy into it and say, ‘Welp, I guess that’s what I am?’” Markle asked. “Or did you even get a chance to decide?” After a momentary pause, Hilton explained that she never was that person. The “bimbo” that Hilton portrayed was a fake persona she developed while attending an abusive boarding school.

“When I was 16 my parents sent me away to these places called emotional growth boarding schools,” she said. According to the hotel heiress, her parents believed they were sending her to a “normal” behavioral intuition to correct her rebellious behavior. However, as shown in the documentary This Is Paris, they abused the children in their care. “Some of the places I went to have been shut down because of the horrible things that have been happening,” Hilton said to Markle. “Deaths and all types of abuse are happening at these schools.” As Hilton spoke about her experience, she initially struggled to recount the details and said, “Sorry, I get a little emotional when I think about it.” “It was all about breaking you down,” she continued. “[They would say] ‘you’re worthless, no one loves you, you’re going to be nothing in life.’ They would just do that to us all day long. It was very painful.”

Hilton said she was under the impression that the facility would be more of an escape, where she could ride horses and reflect on her life thus far. The reality, she said, “took away my childhood.” Hilton further expressed being forced to do a strip search in front of strangers upon arrival, and noticing that the other enrolled children were like “zombies.”

“The only thing that kept me going in there was thinking about who I wanted to be and who I wanted to become when I got out of there,” she said. “In there I started, kind of, building this sort of fantasy life, and Barbie doll character, I guess, just to not think about the pain.” As Hilton then explained, Barbie was the ideal fantasy because she was “beautiful” and “always happy.”

After Hilton left the facility she was asked to star in The Simple Life with Nicole Richie. The reality show — which became a cultural phenomenon — sent both celebrities across the country to work on a farm. While on the show, Hilton channeled the Barbie character and eventually became her brand. “During that time it was encouraged, almost,” she said. “It was like cute to be dumb and bubbly and that kind of like ‘blonde’ thing. I look at it now and I think it's so much cooler to be smart and intelligent, but back then it was like they wanted girls to be like that in some way.”

Though Hilton was able to commodify the stereotype and use the public misconceptions to her advantage, she said it was difficult to break out of. “I almost got, like, stuck and lost in the character,” she said. “At some points, it was like, lines got blurred. It’s like I forgot who I was.”

As she grew more famous, the persona became a barrier between her and the media, which she described as “vicious” and “cruel.” Markle asked if the character was a defense mechanism and Hilton agreed. “They’re not talking about me, they’re talking about this character I created,” she explained.

These days, Hilton does not identify with the character at all. “It wasn’t a good feeling for people to think of me in a way that I wasn’t,” she said. “I’m thinking of having my daughter one day and what I want her to be like and I don’t want her to think it's cool to be a dumb blonde, or dumb herself down for society, or anything like that. I want her to feel free to be whoever she wants to be and to feel strong and brave and not let the world take that away from her.”