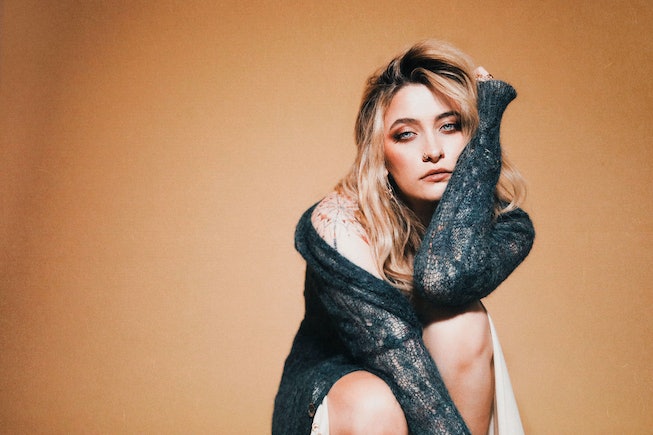 In the video for “Lighthouse,” Paris Jackson plays guitar and sings with her band under the grain of film shot on VHS and 16mm cameras, belting out poetic lyrics like, “I’m the flask in your pocket on a rainy day/ And she’s the one that you share it with on the train.” It’s a tribute to Nirvana’s “Sliver” video, which came out almost two decades ago, but the vibe still resonates today.

Chatting with NYLON, Jackson says that in addition to the Kurt Cobain-influenced video, “Lighthouse” was sonically inspired by the ‘90s bands like Weezer and Marvelous. Where Jackson’s 2020 debut album, Wilted, had a more straightforwardly folk sound, this single — which is part of an EP coming out at the end of the summer — signals a new, grungier era for Jackson. Read on for NYLON’s chat with the artist and watch the video for “Lighthouse,” below.

What inspired the song?

Well, the lyrics are usually for most of my songs, I'm kind of inspired by the same things as of late. I mean, most of the time, which is usually just heartbreak, but the sound was primarily influenced by '90s to early ‘00s bands like Weezer and Marvelous 3, they kind of have a pop twist.

Were those bands you grew up listening to?

In the past, like with Wilted, you described your sound as alternative folk, and this is a little bit different from that. What inspired the change, and will your forthcoming singles have the same vibe?

It's kind of interesting because the songs are still folk at their core. If you just take all of my songs that are newer, so take "Lighthouse" for example, and you put it back on just acoustic guitar and strip down with vocals, it's a folk song, fully. I'm still making folk, it's the production that's different. What's mainly inspired that is just my growth with my voice and my ability. I project more, I scream and yell. I wasn't always able to do that. Something tells me that if I could sooner, I would've been making this music a while ago.

Your songwriting is very personal and lyrics driven. What’s the process typically like for you?

I don't really have a process. I kind of just, it comes when it comes. Sometimes I'll go a month or two to three months without writing a song, and then sometimes I'll write four songs in a week. I don't even know where it comes from. I get a feeling like it's time to write a song and then I sit down and I write it usually within the hour.

Do they usually come to you fully formed?

Yes and no, it's kind of hard to explain. It comes to me in pieces. I find the guitar pattern first, the chord progression, I find that first and then the melody comes and then as soon as that's solid, then the lyrics just start throwing themselves at me. Sometimes it doesn't feel like I'm the one that's writing it.

What was it like to perform at South By Southwest?

South By was a really good experience. I learned a lot about handling mishaps on the fly and kind of just going with the flow. Those South By shows were the first shows that I had done really with my band and with these songs. So everything was very brand new and it was really good practice. I'm looking forward to this weekend, like a lot. I'm excited to be with my boys again. I'm very close with my band. They're some of my best friends, so it's always exciting to be with them in rehearsals, leading up to the show and then traveling together, everything about it is usually a really fun experience.

What aspect of your upcoming EP are you most excited for your fans to hear?

I just want them to have fun. Some of the feedback that I've gotten from Wilted, I've made a few people cry, so I'm excited to make some people move a little bit, but if they read the lyrics, they'll probably have the same reactions still. The lyrics are always going to be dark if not darker. I mean, that's just, I don't know how, I write like that. But some of the songs have like a really fun vibe to them.