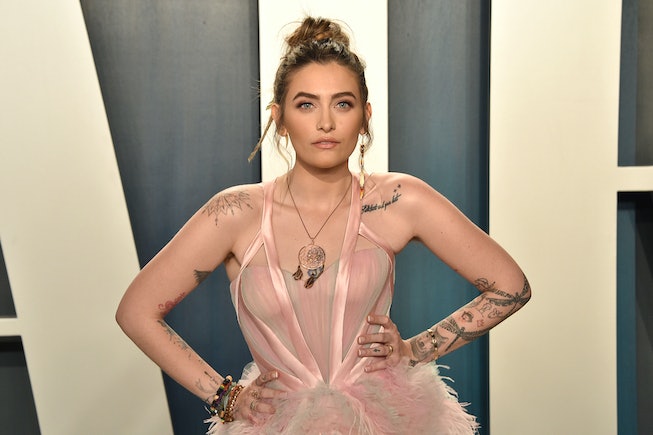 When Paris Jackson was a little girl, she never thought she'd end up with "a dude." Things have changed! Not only does the model and actress have a boyfriend, Gabriel Glenn, but she also has a Facebook Watch docuseries focused on their relationship. In the premiere of Unfiltered: Paris Jackson and Gabriel Glenn, viewers not only got the breakdown of the evolution of Paris' sexuality, but also got to learn a bit more about her father, the late Michael Jackson. Paris recalled how Jackson's fatherly intuition was on point; he picked up on her liking girls at a young age, and as all parents should, didn't make a big deal out of it.

"I didn't know that it was a thing and so, I was a little conflicted about it because all I'd ever seen were men and women on TV together and so, these thoughts didn't really make sense to me," explained Paris, adding that it wasn't long until her dad caught on. "I think he just felt the energy and he would like kind of tease me the same way that he would tease my brothers, like 'Oh, you got yourself a girlfriend.'"

The sweet memory of assurance and acceptance has stayed with Paris, who now understands how rare her experience was: "I'm very lucky to have that, especially so young — I think I was like 8 or 9, not many children have that experience."

Paris also clarified that she doesn't identify specifically as bisexual, given that she's dated outside of the gender binary. "I've dated more than just men and women," she said. "I've dated a man that had a vagina." Paris noted that although her three most public relationships have been with men, the majority of her relationships have been with women.

She's been dating her new partner, Glenn, for over a year. The two had a whirlwind romance beginning. “We went from The Rainbow to an after-party and that’s where I saw her playing an unplugged guitar," Glenn says in the docuseries. Something about the intimacy of an unplugged guitar hit hard: "I was walking towards a head over heel fall.”

The two "immediately just vibed," which turned into hanging out for 72 hours straight, which then turned into Paris moving into Glenn's van after one week of knowing each other. The two clearly have a romantic and creative connection; they recently released their first EP as a band, The Sunflowers.

Love is powerful, weird, and can have you moving into a van despite being worth $145 million. You never know! But one thing is certain for Paris: it has nothing to do with what's in a person's pants. "It has nothing to do with your XY chromosome makeup," she explained. "It's literally just like, what are you like as a person?" Well said, Paris!