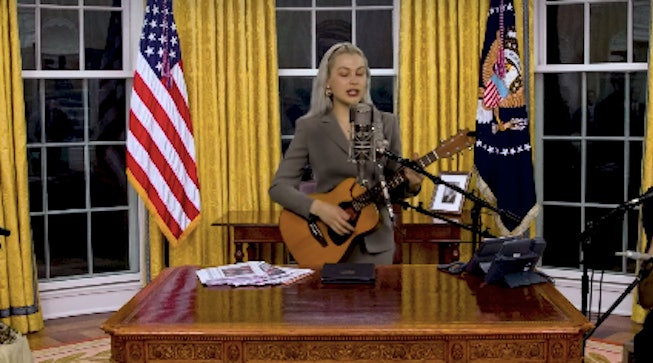 There comes a time in every alt-adjacent musician's life when they must come face-to-face with the NPR Tiny Desk. It's not Phoebe Bridgers' first time at the proverbial rodeo, or her second, or even her third. The singer-songwriter graced the Tiny Desk franchise for her fourth time, performing a few tracks off her celebrated sophomore record Punisher.

The silver lining of Tiny Desk (Home) Concerts is an expansed sense of creative direction on which Bridgers naturally capitalized. She set aside her beloved skeleton costume for this one, but definitely allowed her inner troll to shine bright performing in front of a green screen set to the Oval Office. She also wore a suit fit for a cutthroat pharmaceutical (or oil industry, pick your poison!) lobbyist to really seal the deal. As the saying goes, "We have no choice but to stan."

Bridgers and her CIA agent cosplaying band played “Kyoto,” “Moon Song,” and “I Know the End.” During the latter song, the green screen glitches and the band swaps their acoustic instruments for electric ones as Bridgers screams her way through the song's chaotic climax. Virtual fans join her in the catharsis, and it really does feel like the end is near.