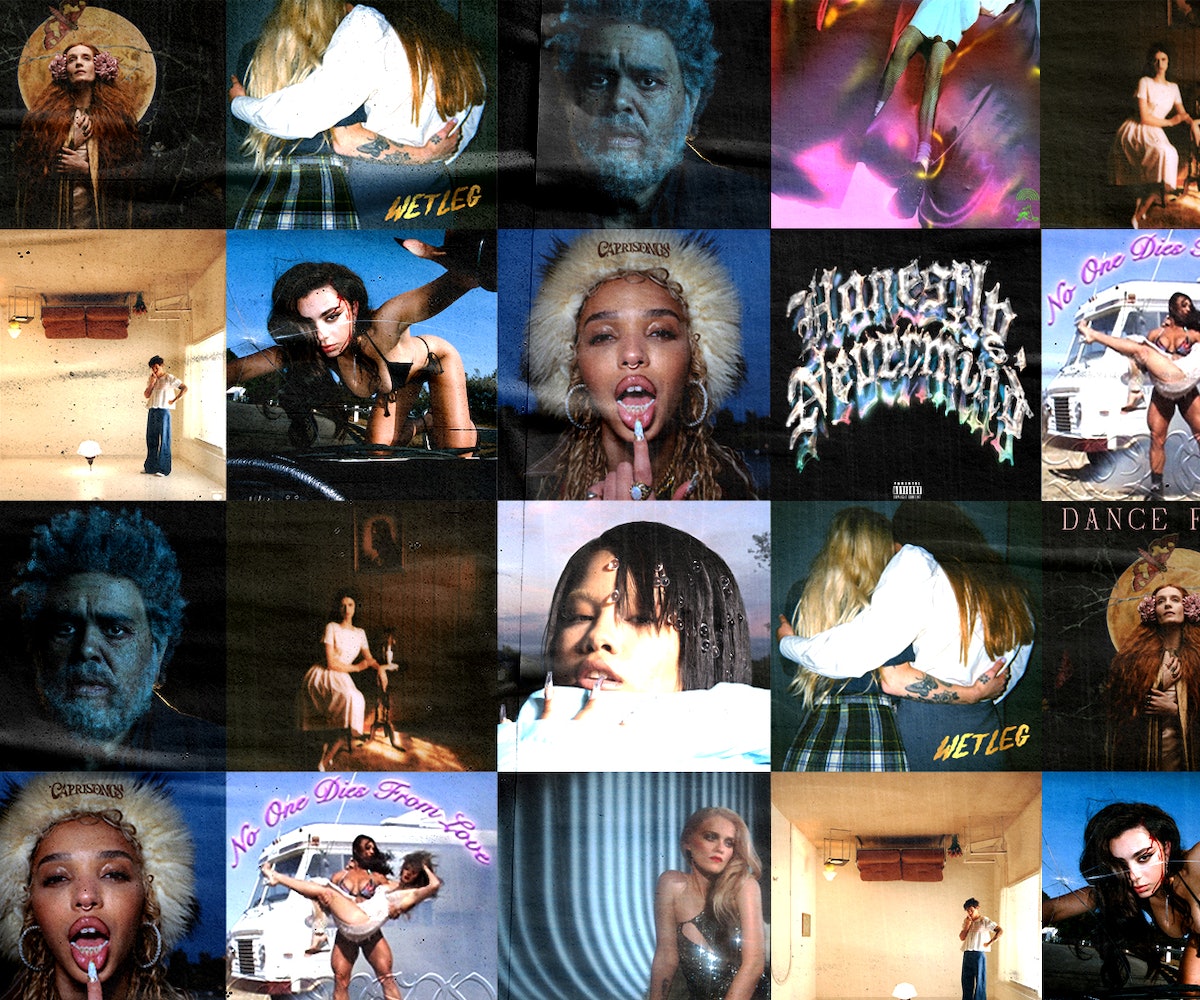 So far, 2022 has been an avalanche of new music. As we cross the mid-year mark, we’ve already seen the returns of some of the world’s biggest pop stars, experienced a rise of an exciting new vanguard, and the introductions of a slew of brand new artists. The albums have been plenty and new music even more so — and there’s still much more left to come in the forthcoming months.

Taking stock of the music industry’s ocean of releases, NYLON has put together a progress report of sorts for the year’s best music so far, rounding up the precious and newly beloved songs and albums we haven’t stopped spinning despite this absolutely torrential rain of new output. Amid this year’s churn, music from established artists like Harry Styles and The Weeknd, emerging song-makers like Ethel Cain, Momma, and icons-in-the-making like MUNA and FKA twigs, have all stood out and taken up equal real estate on our playlists. Below, check out the albums and songs that the NYLON staff have fallen in love with — from Dawn FM to Yeule’s Glitch Princess — and find some new gems for yourself to take into the months ahead.

Most of the time, when I listen to FKA twigs, I struggle with replayablity. Her past albums are beautiful — don’t get me wrong — but they’re also dense and intricate, hard to ingest casually. I don’t have that problem with Caprisongs, the most open, easy, and fun set of songs twigs has ever released. It’s soundtracked workouts, walks, and other random moments of my life. And with every listen I discover a new favorite song. — Steffanee Wang, Associate Music Editor

This whole album is ear candy, and I kept listening to it on a loop when it came out in March. Also, my faves Christine and the Queens, Caroline Polachek, and Rina Sawayama are featured on tracks. How could I not love it? — Alexa Pipia, Social Media Manager

Okay so maybe this answer is cheating, but SZA's deluxe version drop of her classic 2017 album Ctrl has me deep in my feelings all over again. The new tracks add dimension to the already skip-free body of work, and this new version has reminded me of why I fell in love with SZA's voice and songwriting in the first place. — Claire Valentine, Entertainment Editor

A no-skips album that will have you oscillating between crying and dancing (or, at the album's peak moments, just doing both at the same time). — Lauren McCarthy, Executive Editor

If it isn't broke, don't fix it. I've been listening to Dawn FM consistently since it first came out, and its synth-y nihilism translates to the hot summer days as well as frigid nights it soundtracked when it first dropped back in January. What can I say, I'm a sucker for soaring vocals and a sad, sad storyline. — CV

With layered, doll-like vocals and plenty of distortion, Yuele's Glitch Princess makes you feel like you're trapped in a warped, lucid dream sequence. It's freaky, haunting, and ultimately compelling. — Layla Halabian, Culture Editor

This whole tracklist just became my album of the summer. From "Massive" to "Tie That Binds," there's something nostalgic about Honestly, Nevermind that reminds me of Drake's earlier career. — Kelly Reed, Social Media Editor

I don’t know who needs to hear this - Tomberlin

Of all the incredible albums that have come out this year, this is the one I've returned to the most. It's equal parts calming and emotionally invigorating. I can't begin to count the number of moments or lyrics that give me full body chills. — LM

Brooklyn singer-songwriter Grace Ives made this year’s most relatable pop record. I’ve already waxed poetic about my love for Janky Star, a playful, irreverent, and unexpectedly resonant collection of songs — and I’ll keep going. Like its title, its songs spin everyday loser feelings into shiny, dynamic pop gold. “Lazy day, it feels okay to repeat it,” goes one line. God knows I’ve lost myself in that loop more than once this year. — SW

I've been listening to Wet since a friend first sent me a track of theirs way back in 2013. Listening now to Pink Room, which reunites frontwoman Kelly Zutrau with the band's original collaborators, takes me back to that time. Like much of Wet's music, it's both playful and sad at the same time, and Zutrau's vocals are as haunting and soothing as ever. — CV

As we all now know, 2022 is the year of house. Bodysync, the side project of producers Ryan Hemsworth and Giraffage, turned it up and gave us one of the best house albums of the year. No skips, just 37 straight minutes of non-stop grooves. — Lindsay Hattrick, Senior Designer

Uffie returns better than ever with an electric, otherworldly ode to nightlife. Songs like “anna jetson” and “sophia” makes me feel like I’m partying at light-speed in another dimension. — Lindsay Hattrick

Bad Bunny delivered this album right before the summer because he knew we needed some new songs to dance to. He truly never disappoints. — AP

A solid indie rock debut album from a very stylish duo. I also find every song pretty cathartic in these extremely tense times. Scream along to “Ur Mum” and you’ll feel it, too. — MB

“Anything But Me” - MUNA

THE breakup bop of the year. — LM

I am so f*cking excited Sky Ferreira is back, and this song was well worth the wait. This track is bringing me back to my 2014 Tumblr self. Thank you, Sky!! — AP

In a perfect world, this glitchy club track from London's Shygirl would play at every party in every nation on Earth. Deliver us to the dance floor! — Layla Halabian

This is prime getting-ready-to-go-out music and the accompanying video, complete with catchy choreography and plenty of fashion statements, also deserves your attention. — MB

All I ask is that we get more sexy, sweaty, hypnotic club anthems from Tinashe and Channel Tres. Even on her bonus tracks, Tinashe delivers. — Lindsay Hattrick

Give Gaga all the Oscars! No one knows how to do a cinematic song quite like her. It sounds just as epic on the 100th play as it does on the the first. — Sam Neibart, Beauty Editor

Role Model's new album Rx is a masterpiece, but I've had this one on repeat. — KR

The ultimate summer song. Sounds best while driving with the windows down. — MB

“No One Dies From Love” is yet another 10/10, perfect pop song from Swedish pop princess Tove Lo. Heartbreak has never been more dramatic and danceable. — Lindsay Hattrick

With each listen of Megan Thee Stallion's "Plan B," I feel like I'm conjuring a spell to humiliate an (alleged!) ex-boyfriend. Imagine hearing the line, "I'm the only reason that your goofy-ass got bitches" and not perishing on the spot. Leave it to Meg to make a universal diss track that will outlive us all. — Layla Halabian

When I first listened to Harry's House, "Satellite" stuck out to me immediately. Then I saw online chatter that it reminded fans of One Direction's "Clouds" and I knew that was why my subconscious fangirl had gravitated towards it. — AP

“Speeding 72” is the song that got me into Momma, the Brooklyn band that I earnestly believe will be the next to blow up. Just try to get the song’s grungy and great guitar riff out of your head. You can’t. — SW

“Spitting Off The Edge Of The Earth” (feat. Perfume Genius) - Yeah Yeah Yeahs

A song that sounds both epic and intimate. I can't wait to see what else the YYY’s have in store for 2022. — LM

Given the talent in the room, it's no surprise a Mallrat x Azealia Banks collaboration turned out to be this catchy. Mallrat's ethereal voice soars over Banks' luscious flow, resulting in a track as refreshing as a dip in a clear blue pool. — CV

“Taking Over The Sun” - Goth Babe

If only I had a car in the city to drive around with my windows down to this song. Goth Babe always provides a perfect summer beat and the catchy "Taking Over The Sun" is no exception. — KR

Every time I think I’m done with Drake, he annoyingly pulls me back in. “Texts Go Green,” with that delicious, delectable dance beat crafted by Black Coffee's son, Sona, was that hook for me from Honestly, Nevermind. It’s just too bad Drake knows exactly what we want. — SW

From the delightfully nostalgic opening beat to the lyrics, this song is basically the 2022 answer to "What Is Love." You can't help but want to dance when you hear it. — SN

I've had Dedicated on repeat since it came out in 2019, and have been waiting like the faithful CRJ stan I am for her latest offering, which of course didn't disappoint. "Western Wind" is at once uplifting and wistful, and transports me back to my native California every time I listen to it, which is often. — CV