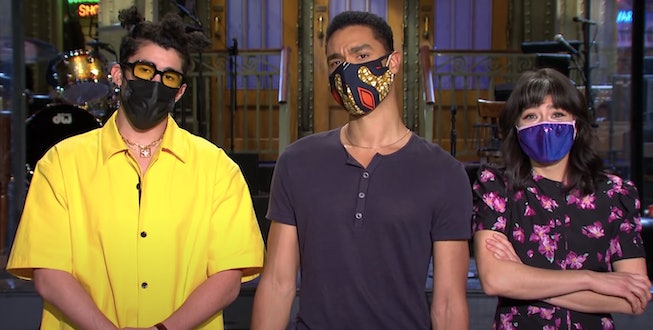 Regé-Jean Page is ready to risk it all — even his name — for Saturday Night Live.

The Bridgerton breakout star will be hosting the comedy show on February 20, with musical guest Bad Bunny. In the promo for this week's episode, Page stands alongside Bunny and SNL cast member Melissa Villaseñor, who says she's changing her name to "Bad Melissa." Page joins in, saying his new name will be Regé-Jean Bunny. For his part, Bad Bunny opts to keep his name as is, saying, "Bad Bunny's already cool, so, I'm gonna keep it." As Page says, "that's fair." Why mess with perfection?

The pair make for a great SNL guest duo. Page is fresh off his role as the notably sexy Simon Basset, Duke of Hasting in Shonda Rhimes' brand new Netflix period drama, Bridgerton. Bunny, meanwhile, managed to have a fruitful 2020 — dominating the Latin Grammys, giving an impromptu, COVID-safe roving concert through the streets of New York City, releasing a sold out Crocs collaboration, appearing on the cover of Playboy (the only man other than Hugh Hefner), and releasing his third studio album, El Último Tour Del Mundo, to critical and commercial acclaim.

Watch the promo video below and catch Page and Bunny on SNL this weekend: