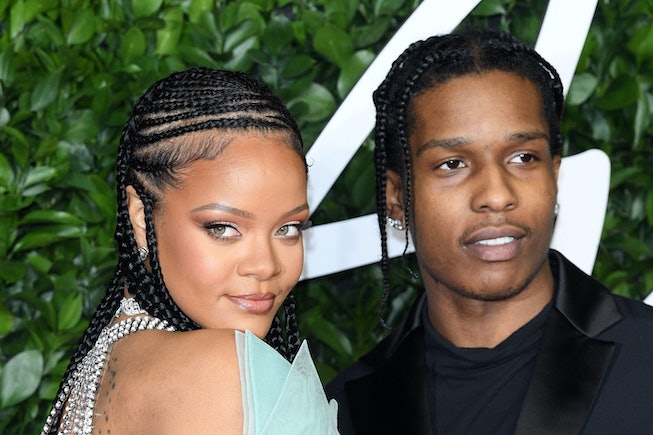 Rihanna is the premiere multi-hyphenate of our time. She's a fashion designer! Beauty mogul! Actress! Even an occasional pop star! But her truest, more striking hyphenate comes from deep within — her ability to troll anyone, anywhere, at anytime. When Rihanna tweeted that "Every tongue that rises up against me shall fall!!!!!!" back in 2012, it was low-key prophetic, a signal that she would forevermore make us cackle with her one-liner takedowns.

Now, she's back at it again, but for once, her quick wit wasn't directed at a fan demanding what critics are calling "a new album," but toward her peer and fellow beautiful person, A$AP Rocky. For GQ, the rapper joined Rihanna for a light and playful Zoom chat on all things skincare (Rihanna asks him his skin type, A$AP says "handsome," Rihanna rolls her eyes.) Rihanna then asks him about his first ever red carpet look, which is where things get juicy.

Rihanna pulls up the photo of a young A$AP at the BET Awards as he tries to describe the look and unleashes the clowning. "No, you don't have to point out Hermès and Raf [Simons]," she interrupts. "This is you?" Reader, I screamed. A$AP soldiers on, but Rihanna has other plans. "Nah, stop trying to make it sound dope!" she exclaims, pointing her phone to the laptop camera. "This is you?"

To be publicly roasted by Rihanna is both mortifying and yet, a total honor. She only had one more comment on the matter: "You could have used some Fenty Skin back then." Of course.

NEXT UP
Entertainment
NCT Teams Up With Sanrio For Their Next Merch Launch
Life
A Breakdown of Ezra Miller’s Run-ins With the Law
Entertainment
Latto, Bigger & Better
Entertainment
G Flip On Coming Out & Being Proud Of Girlfriend Chrishell Stause