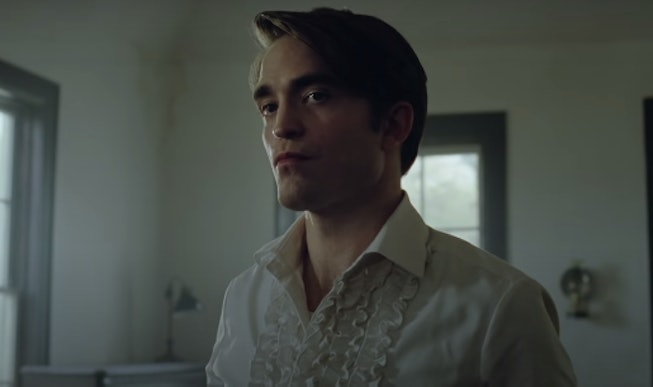 For those of us still unable to visit a movie theater to see what Christopher Nolan was able to pull out of Robert Pattinson forTenet, at least we can still hold on to our mutual excitement for whatever he'll inevitably bring to his take on the beloved superhero Batman. But before that, audiences all around the world will be able to see him in a much more widely-accessible release, as one of the key players in the upcoming Netflix film The Devil All The Time. Sure, he won't be fighting crime or acting opposite Zoë Kravitz in this role, but he will be fighting demons and sin while acting opposite stars like Tom Holland, Riley Keough, and Bill Skarsgård. And judging from several recent comments made by director Antonio Campos, it's become clear that what Robert Pattinson does in The Devil All The Time is acting with a capital-A.

Based on Donald Ray Pollock's 2011 novel of the same name, The Devil All The Time is a psychological thriller that follows several interconnected stories of people living in a small Ohio town. In it, Pattinson plays Reverend Preston Teagardin, a crooked preacher with more than a few secrets and sins to atone for. It's a performance that has already garnered praise for Pattinson, even from critics who didn't exactly enjoy the film itself. You can catch a glimpse of his character in the trailer that was released a month ago, which shows Hollywood's leading (indie) man sporting a perfectly-coiffed head of swept-to-the-side hair and dressed in a bluish-grey suit with a lightweight poet shirt worn underneath. His voice is perhaps the most interesting character choice, however — a slow, determined snarl that easily betrays the menace he surely has up his sleeve. ("That ain't no preacher. He's as bad as they got on the damn radio," Tom Holland's character says at one point.)

But this affected voice was not simply pulled out of a hat. According to Campos, Pattinson did lots of research when preparing for this role, and his vocal delivery is the result of that. Speaking to Esquire UK, Campos said, "[Pattinson and I] looked at a lot of different YouTube videos of evangelical preachers and also the pop-stars of the time, like listening to interviews with Elvis and hearing the way he would talk. Then Rob’s own madness; he had his own process and was on his own consuming a lot of different references. I didn’t really hear the accent until we started to shoot, he really showed up in character and showed me Teagardin for the first time."

Furthermore, the actor apparently took a quasi-method approach to his role during the filming process. Though he didn't fully stay in character the entire time a lá Jared Leto in Suicide Squad, Campos notes that Pattinson would "let it go and come back." Describing the actor as "very fluid," the director recalled telling the future Batman, "Don’t be scared to go as far as you want to go, throw it all out there and let’s see where it goes." Naturally, Pattinson, a consummate professional, did exactly that. "Sometimes he’d go so far he’d make himself laugh and even in those takes we might get something brilliant, but it was like he would kind of zero in and be in it. The performance is almost closer to a possession than it is a performance," Campos says.

Check out the trailer below. The Devil All The Time hits Netflix this Wednesday, September 16th.