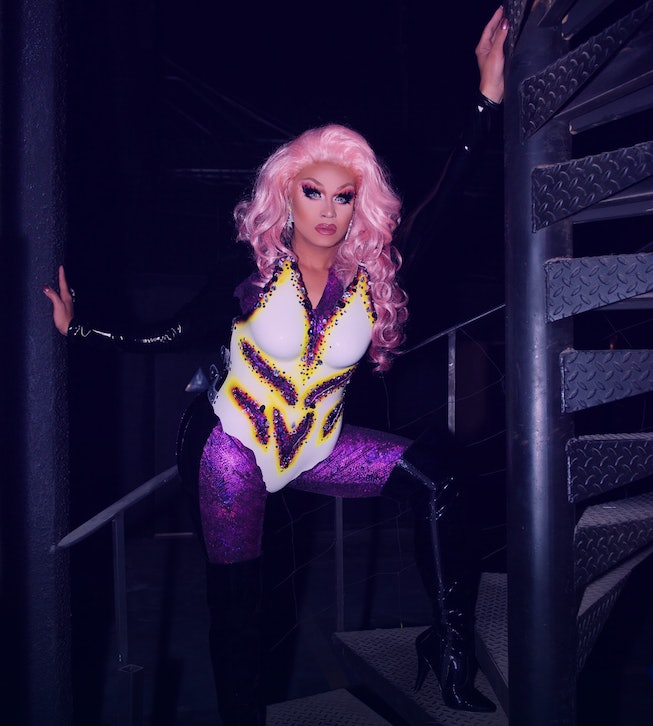 Every week, NYLON writer Michael Cuby will conduct an exit interview with the queen eliminated from RuPaul's Drag Race All Stars Season 5. This week, Mariah was asked to sashay away.

Can you say you’ve touched Ricky Martin’s heart? Because Mariah Paris Balenciaga can.

For the RuPaul’s Drag Race: All Stars 5 Variety Show, Mariah performed a gripping rendition of a poem she wrote about marginalized communities. Dressed in a white dress that she gradually covered in red paint, Mariah spoke of the “stains upon the walls of those who voice power and pride” before asking, “Will we transcend and ascend? Will the fear and hate ever end?” It was a particularly powerful presentation, especially in the context of Drag Race. Though it wasn’t enough to land Mariah in the top, Ricky Martin made a deliberate attempt to compliment the queen for her work. Right before RuPaul dismissed the safe queens to go backstage, Martin chimed in, “Can I say something? Mariah, your performance had a very beautiful message, and the fact that you brought that message, I think, is very important. So for that, I really thank you.”

An Atlanta native who got her start in the ballroom scene, Mariah quickly became a fan-favorite during her original stint on season three of Drag Race thanks to her shady wit and rapid fire comebacks. A stunning beauty with incomparable poise, she was a threat entering the All Stars competition. However, after making a good impression during the Variety Show, Mariah consistently found herself in the bottom. Last week, the queens were charged with creating a luxury hotel suite. Settling on a Golden Girls theme, Mariah and her team were praised for their execution of the suite’s aesthetics, but docked for not featuring any real jokes in their advertisement. When all was said and done, Mariah landed in the bottom, where she was the only queen without a maxi-challenge win under her belt. Unfortunately, in the lip-sync, the latest “assassin” Monét X Change demolished challenge winner Jujubee, and after a very close vote (with each queen getting at least two), it was Mariah who was sent home packing.

Several days after her elimination, NYLON hopped on a Zoom call with Mariah Paris Balenciaga to talk about the inspiration behind her spellbinding Variety Show performance, why she disagrees with the judges’ critiques about her three-in-one runway look, the difference between being naturally goofy and a “slapstick comedian type of girl,” and why she wishes she could have lip-synced at least once while competing on All Stars.

What do you think went wrong in this challenge?

The judges! I wholeheartedly feel great about how everything went on my end. I feel great with my team, I felt good with our final product, I felt great about how it was presented. My runway look was sickening. So it was just a matter of the judges’ taste and their critiques. All you can do is your best and I can 100% say I did my best. I left it all on the floor.

It seemed that at least some of the judges’ issue with your hotel suite advertisement stemmed from their familiarity with The Golden Girls. Is there any part of you that regrets picking a concept that was so easy for them to compare to the original thing?

No. It was brilliant. What better concept than something that was immediately identifiable? It actually fit exactly what the challenge was calling for. You wanted a luxury suite that people would want to come to and spend money and stay. What gay do you know that would not want to go to a Golden Girls-themed resort? It was relatable, nostalgic, and I think it was a great idea. I mean, it’s not a mosquito net and a mattress on the floor in the jungle but I thought it was pretty effective!

This was the first episode this season where the choice of who would go home was not unanimous. There were at least two votes for every queen in the bottom. Do you think the queens missed an opportunity to send home a frontrunner like Shea Couleé?

Of course that was a missed opportunity. You could do that. But I believe in competing against the best. I wouldn’t have necessarily kicked off the strongest competitor. That makes it boring for me.

What is your take on how the voting should work on All Stars?

I was really disappointed that there is no recourse for the person that’s up for elimination. Your last-ditch effort is just pleading your case to the other girls, but I’m not really one to beg for an opportunity. I’d rather show you why I need to be there. I was really wanting to redeem my lip-sync moment from season three and show the passion on the runway for why I should stay. So I really was like, “Just tap me in, bitch! Let me lip-sync for myself!”

Was that something you came on to All Stars wanting to prove?

I think you really got to do that in the Variety Show with your emotional quasi-performance art poetry piece, which Ricky Martin was a huge fan of. Can you tell me a little bit about the background of that piece and why you chose to do it?

Well, I wrote that poem six years ago. As a talent, I wanted to challenge myself to be more vulnerable and put out some original material. I wrote that poem about America and how the glossified American dream that we see on TV, that’s promoted and propagated, is a picture that’s painted with blood, sweat, and tears of minorities and marginalized people — Indigineous, Latin, Asian, and Black cultures. A lot of those people aren’t the ones benefiting from it; they aren’t profiting from it. That beautiful shiny picture that is the American Dream is a nightmare for a lot of people, and has been for a lot of different cultures here.

Obviously, you filmed this at a different time. But as it so happened, that episode aired right as the Black Lives Matter protests were gaining steam, and what would have been powerful anyway gained an entire new resonance. How did it feel to be able to show that completely different side of your art in a moment when it would probably be received best?

Well, it was pretty much an aha moment. I got such a chuckle off it and off people’s reactions because it’s like, right when you think you know who I am, you really don’t. That’s the case for a lot of people. People are constantly topical with their opinions on who someone is and who they perceive them to be, but if you just give them thirty more seconds, you’ll see a whole nother part.

While convincing some of your castmates that you should stay, you talked about how you needed to push your personality out more on camera. What was holding you back before that?

If you’ll look at my phrasing of that, you know I said “show my personality more on camera.” A lot of times, in the format that is RuPaul’s Drag Race, everything is kind of for yucks and laughs. It’s one-line zingers and ba-doom-boom. But that’s not me. Now, I’m goofy as hell. I’m a good-time girl, but if you don’t know how to catch that on camera, I don’t know what to tell you. I’m really not a slapstick comedian type of girl, and I’m also definitely not one to try to fight for camera time. That’s just not in me. I can make good TV if you know when to point the camera.

Michelle Visage had a real problem with the first reveal in your runway look. Do you stand by the fact that you met the criteria? How do you respond when the judges don’t seem to understand what, in your mind, makes perfect sense?

Well, it wasn’t something that was in my mind. It was visual. I don’t know how much simpler I could have packaged that challenge for the judges. I executed what the challenge was. Ultimately, it comes down to their opinion and their taste level. But I’m completely content with my decision and with what I displayed. It’s just a difference of opinion. We’re just going to agree to disagree.

You originally competed in season three, which was almost a decade ago — a much different era for Drag Race. What were you most surprised about how the show has changed?

Just the influence of social media. But I wasn’t surprised. But sometimes, the unfortunate part is that social media following somehow gives the fanbase a gauge about a queen’s entertainment value or their worth, which is, most often, deceptive and defeating. Because you can have a great following, take beautiful Instagram pictures, and use great filters, but ultimately, in this industry, you have to be in front of people and you have to deliver a personality.

Are you already seeing the difference in the fan and audience response?

Yeah. The funny thing is that people are like, “Oh wow! I didn’t know Mariah was able to do that.” But the thing is, I’ve always been here. I never disappeared. People are influenced by the popularity of social media, so they really chose not to see me. I have lower numbers because I was in the earlier seasons, and they’re like, “Oh, she must not be worth following.” But now, people are seeing the proof in the pudding. I can deliver and I think that’s exactly what they saw. That’s what I took to the show and let it pop.

I know you and Mayhem Miller are really close. Did it feel comforting to be competing alongside one of your best friends?

It feels good to go through that with somebody that you can ki and cackle with, that you can vent to, that you know understands. And when you are venting, they won’t judge you. They get it. So it was awesome to know that I have somebody there that I was close to, and that when we go home after the full competition is done, we can just sit back, have us some cocktails, and just ki about it.

Now that you’re gone, who are you rooting for?

Well, of course you know I’m rooting for my sister Mayhem, honey. I sent her a message on Facebook. I was like, “Alright, bitch. You better keep slaying them hoes!” But I’m also rooting for Alexis. Alexis came so close our season — she was top three — so I really hope she gets there towards the end. And I think Shea has a really good chance. She’s a very strong competitor. I just love how well thought-out her concepts are. And, of course, Jujubee has the personality that will light up any room. I’m definitely rooting for them, but I’m wishing all the girls good luck.

Usually, when a Drag Race season is airing, queens are out touring, hosting viewing parties, and doing everything they can to capitalize on the moment. How has it felt for you to miss that part of the experience because of the ongoing pandemic?

Ideally, of course, you’d want to capitalize off it and recoup the coins you invested in getting ready. But I think that, especially with it being Pride season, it’s an awesome opportunity to just reflect on what Pride really is about. It’s about knowing who you are, knowing your worth, and demanding respect. I think [the pandemic is] giving us a good length of time to do that.