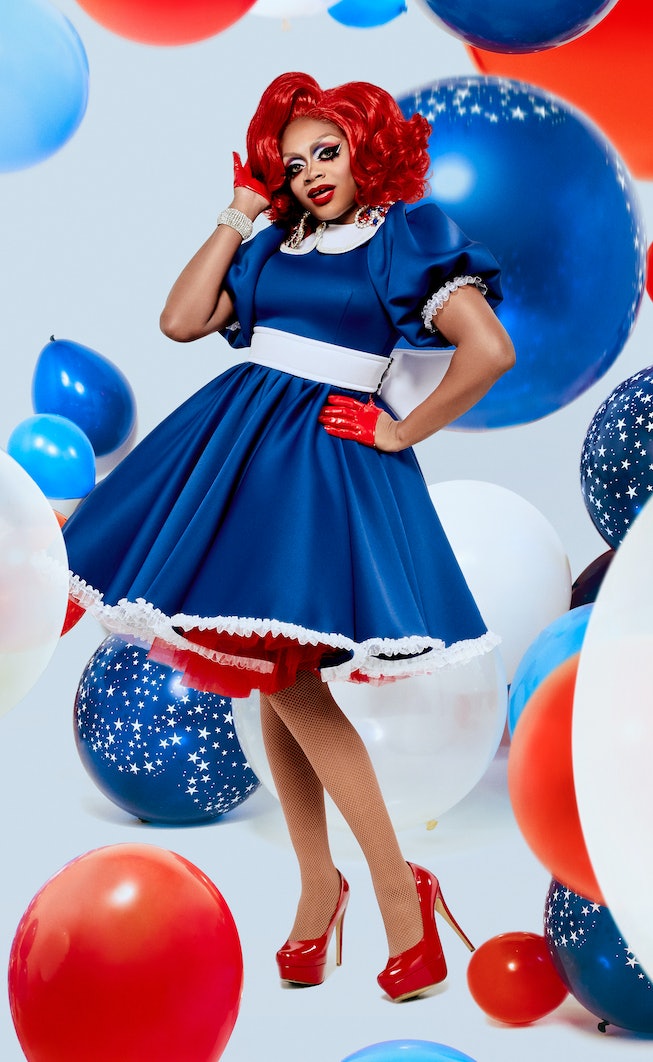 Every week, NYLON writer Michael Cuby will conduct an exit interview with the queen eliminated from RuPaul's Drag Race Season 12. This week, queen Heidi N Closet was asked to sashay away.

Heidi N Closet might have entered the Werk Room with a whistle, but the North Carolina queen certainly went out with a bang. With her adorable gap and delightful Southern twang, Heidi quickly endeared herself not only to the judges but also to many of us at home. So much so, in fact, that even as she floundered in the season’s earlier episodes — fluctuating between the bottom and being safe — there seemed to be a constant effort to keep her around. It all paid off in the eighth episode, when the small-town queen finally learned how to bring her off-camera charm into a Main Challenge, leading to her first win in the competition.

Unfortunately, nothing good can last. Just two weeks after her win, Heidi found herself back on the bottom, lip-syncing for a third time and getting by on the skin of her cheek when RuPaul issued the first double shantay of the season. When she landed in the bottom again the following week — this time, after performing a one-woman show that found the queen playing four different characters at once — her fate was written in the stars. Forced to lip-sync to Prince’s “1999” against current frontrunner Jaida Essence Hall, Heidi certainly gave it her all, but in the end, it was Jaida who made it (purple) rain on the stage and Heidi was sent packing.

Ahead of last week’s episode, NYLON hopped on the phone with Heidi N Closet to talk about the double-edged sword of being a small-town queen, lip-syncing four different times, whether or not she’s decided to change her drag name, and the difference between coming on Drag Race to show the world what you can do and coming on Drag Race to win.

What do you think went wrong this week?

I feel like I got over-ambitious. At this point in the competition, you’re in a place where you have to go big or go home and I think I went too big...and then I went home. I did both things.

There are worse ways to go!

Absolutely. I’d much rather swing big than play it safe and just skate by. At least I tried.

This seemed like a particularly difficult challenge anyway. Was that nerve-wracking?

It was at first. I host a brunch, Rainbow Brunch in North Carolina, but other than that, I’ve never been on a microphone in drag. I had only done it like twice before going on the show. But a lot of the girls have their own shows and have been doing stuff on the mic for many years. I knew that, so I was like, Oh God, they’ll know how to go with the flow on the microphone while I do not. So that was nerve-wracking going into it.

You were the only person that did a performance involving multiple characters. What led to that decision?

Well, I nailed my family members individually, but I think the problem was having to switch back and forth so often between them. That’s where it got muddled. I can do good impersonations of them when I’m just doing them one-by-one. But having to do conversations, switching in and out so quickly, I think is where it became a difficult situation.

On a brighter note, several weeks ago, you won a main challenge after fluctuating between the bottom and being safe. What do you think led to you finally getting that win?

It was a dream come true. It was literally like...eleven years and eight weeks’ worth of anticipation coming to fruition. It was amazing. I was definitely very nervous going into that challenge. I don’t know if you clocked it, but on week 8, when I won my challenge, I was the only queen left in the competition that had lip-synced — and I had already lip-synced twice. So I was very nervous going into that challenge and knew I had to swing big and go for it. It was hard work, but Bob [Harper] telling me, “What you’re doing off camera, put it on camera” really helped me hone in and focus. I think it came across very well. It was a dream come true, almost like a Cinderella story.

You mentioned that what really helped was bringing your off-camera personality into your commercial. Do you think there was something in the earlier weeks that was causing a disconnect between those two sides of yourselves?

Usually, when I’m back at home, I have someone there — my partner, Jacob, who really lights that fire under me and always makes sure I’m giving 100%. But going to Drag Race, you don’t have that, and I think that was kind of a detriment to me. Like, in “World’s Worst,” I had the voice of Jackie [pushing me], and guess what? I was in the top that week. And in the challenge that I won, Bob was there like, “Hey, hey. Focus!” It helped and I won. It was definitely having that voice telling me, “You got this. Just reel it in and go for it.” Going forward, I need to make sure that that is in my head at all times.

You come from a very small town. How do you think that prepared you or failed to prepare you for what to expect in this competition?

It was a double-edged sword. The obvious thing is that it’s a disadvantage because you don’t have all the resources and outlets that people from bigger cities have — like all the designers and stuff. But the other, positive side of it is that when you go to the competition, you’re coming from such a small area, you don’t have any pressure to do well. Like Brita, she came in and was really focused on making New York proud of her, and I think that’s what held her back. Being from a small town, you don’t have that.

You’ve also had more room for growth than some of the other queens, which has been incredible to watch. You’ve done such a good job taking critiques.

Definitely, the way that I am is always being willing to grow when I go into something. So I was taking in all the critiques — and not just mine, but also the other girls’ critiques as well. I’ve always been open to learning and growing. It was hard at times because, you know, everyone is so great and it was stiff competition. But I always tried to put my best foot forward.

Does it feel different to get critiqued from judges vs. from your fellow competitors? I know your response to Gigi Goode’s critique about your makeup was not the same as your responses to Michelle Visage.

Well, I went in to hear what the judges were saying and grow from it. But hearing it come from a fellow competitor was definitely, in the moment, hard to hear. It was like, “Well, you’re not behind that panel!” It’s very that. Like I said on the show, I did not come to prove anything to anyone else but the judges, and you don’t want to hear from your competitors that they think you are weak in certain areas. You want to go in and try to be as strong as you can. Week 3, I was told I was one of the weakest links by Jaida, so it was just more of that. You don’t want to hear that from your competitors. But even from competitors, you can take the grains of truth and really just run with it and grow from it, which is something I always strive to do.

Throughout the season, you’ve lip-synced four different times. Did they feel different?

They all felt very different. The first one was like, okay, I fucked up but I can bounce back from it and I refuse to go home. The second one was like, okay, I’m back in the bottom. I don’t know how, but I know Brita has sent a couple girls home and I do not want to go home because I still have so much I want to show. The third one, I was actually very confident because that was a song I normally do back at home all the time. So I was like, there’s no way in hell I’m going home tonight. Sorry to whoever I’m up against, but I refuse. And the fourth one was like, okay, I’ve come, I’ve shown what I can do, and it’s my time. No queen — I don’t care who you are — survives a fourth lip sync. So I knew going into that one.

Were you surprised that the third lip-sync ended with a double shantay?

I was surprised. I honestly can’t even tell you what Jackie did in the lip-sync because I was so focused on my performance. So when they saved her, I was like, “Well, she must have turned it too! Work!”

Throughout the competition, RuPaul has continuously tried to convince you to change your name. How did that feel and what did you decide in the end?

Well, I always like to think of things as positives. They may not have liked my name, but to have not liked it, they had to know what it was. Which means I was not fading into the background. I always looked at it like that, like, “They might not have liked it, but they know it!” I was still on their minds. Even the fans were going back and forth! Always, “We love Heidi N Closet! No, we hate Heidi N Closet!” Polarity is a good thing because it can keep you relevant, and I think it kept me in the judges’ mind all the time. They were always thinking, “What can we name her? We hate this name so we have to give her something else.” They were always thinking of me, so it didn’t hurt my game at all, I don’t think. As far as the name I’ve landed on, you may have to look forward to the future a little bit and maybe we’ll come to a conclusion.

Across all the queens, I think you’re the clear fan-favorite, the breakout star. Considering what you said about coming on the show simply to show the world what you have to offer, how does it feel to know that, even as you go home, you really have made a mark?

It definitely feels like a job well done. I literally quit my job during auditions and said, “You know what? I’m getting on Drag Race and will basically be homeless.” Going out on a limb and really going for it and always being your true, authentic self and still being well-received has been amazing. I’m definitely just really proud of everything. To see the response from the fans has been the most amazing thing. You never really know how you’ll be received. So to be received so well has been a complete 180, because growing up, I was always ridiculed for just being who I was. It’s been a completely different experience from what I’m used to and it’s been magical. It’s something that I will always carry with me and I wouldn’t change anything.