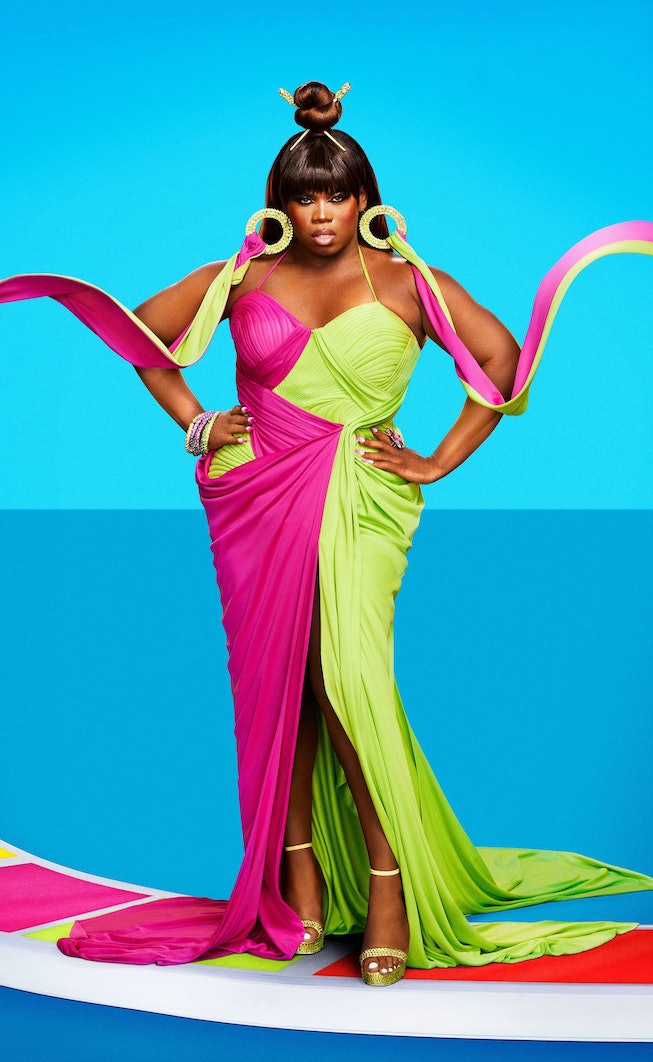 Jambalaya — the popular cajun dish consisting of rice, vegetables, and several forms of meat — is known for bursting in Creole flavors. In this way, it’s no surprise that June Jambalaya, a quick-witted queen from Jacksonville, Florida, chose the dish as her namesake. Strutting into the Werk Room decked out in a trippy-patterned Emilio Pucci jumpsuit, June immediately established herself as a legitimate fashion queen with the designer duds to prove it. (“Super talented and a label-whore,” as her close friend-cum-competitor Kornbread put it.) But from the beginning, she also assured us all that she had way more to offer than just cute clothes.

June started out confidently enough. As a trained dancer, the LA-based queen was excited that season 14 was kicking off with a talent competition; she couldn’t wait to show off her African dance routine to the judges. In the end, however, a rogue headband that refused to stop falling over her eyes turned what could have been a transcendent performance into a slightly awkward one. June landed in the bottom that week, but made it to the next episode by the skin of her teeth. Given her fashion expertise, this week’s ball should have been the perfect opportunity for June to redeem herself. Unfortunately, though the judges collectively gagged over her allover zebra-print three-piece set (complete with matching handbag), her other two looks failed to meet that same bar. When it was all over, June once again found herself in the bottom two. And after shedding almost every article of clothing she had on during a lip-sync to Kylie Minogue’s “I Love It,” it was clear that this pot of piping hot jambalaya was ready to be taken off the stove.

Ahead of her elimination, NYLON hopped on a Zoom call with June Jambalaya to talk about taking sewing lessons (but not enough), the disadvantage of being a part-time queen, opening up about her body insecurities on camera, and why she thinks she’s a member of the City Girls.

In your own words, what do you think went wrong that ultimately led to your elimination this week?

Well, I have to ask. Given that we’re in season 14 of Drag Race, there’s no way you didn’t know that sewing would be required. Were you just hoping that everything would work out?

No. I actually took sewing lessons to prepare for the show. I took two sewing classes. The first one was just learning to thread the machine and the second was learning to do a stitch. And, you know, [in this challenge], I made a dress! It just wasn't the best dress out of the thirteen of us.

You came into the competition introducing yourself as a fashion queen. You entered the Werk Room wearing an Emilio Pucci jumpsuit, you’ve done promo in Christopher John Rogers, and you’ve mentioned being a fashion stylist by day. None of this means you can sew, but given how much effort you put into your look, was the ball something you were excited about?

I was dreading it more because I thought it was going to push me creatively in a way that I honestly wasn't prepared for. This is different from being a personal shopper where I just go and grab clothes and put outfits together. I'm now grabbing fabric that has no silhouette, shape, or body, and I'm having to put it together. So it was nerve-racking for me. And I think, honestly, if I just would've taken my style point-of-view from it, it would have serviced me better than just letting the natural drape of the fabric give me anxiety.

Furthermore, each week you’ve been in front of the judges, someone has called you out for finishing details. In the first week, there was your headband malfunction during the talent show. This week, they called you out for tripping in your eveningwear look. Again, coming from a fashion background, how does it feel to be critiqued on elements of your outfits?

It was hard for me. Unfortunately, drag was something I only did part-time, so [preparing for Drag Race] was the first time I actually worked with drag designers. And in three weeks, I didn't really have time to go to every single fitting — from Chicago to New York to Miami. You know, we’re pulling all these things and people are making things around the clock for me. So some of the times, when I was getting ready, that was actually my first time ever even wearing the garment — which is not ideal, but was just my reality for this situation. I definitely think that if I would've prioritized [that], if I only used LA-based designers and had fittings, I could have fine-tuned my looks the way I would for something that's going to be out on the red carpet.

Going off that, do you think full-time queens have an advantage over part-time queens when coming into the competition?

Yeah, I do think there is an advantage because you have a bit more resources, you have a stronger foundation within the drag family. A lot of queens maybe even have looks already that work for certain categories. My part-time gig in drag was just doing brunches and performing. So I had performance clothes. I just didn't have anything that was signature runway ready.

In the very first Untucked of the season, you opened up to the other queens about why you decided to wear tights for your dance routine in the talent show. You said you were self-conscious about how your thighs might look on TV and were scared of what other people would say. Over the years, Drag Race has done such good work for promoting body positivity. But as you note, the fans can still be mean, and queens on the show are often still subjected to scrutiny. Since appearing on TV, how has the response to you and your body been?

I've gotten a lot of messages about people appreciating my transparency and my honesty about my body. I really went into this [competition] trying to be as authentic as possible because, as someone who trained in dance, I've spent a majority of my life in front of a mirror — telling me how I should look, how I should be placed, and how things should be, appearance-wise.

That has warped my mind and my perception of how I look sometimes, and I think a lot of people can identify and relate to that. So I was just happy that my honesty really was able to shine a light on that and also show the fans that we're still human — that the fears of what they will say and tweet and write in the comments are real, and that it does affect us in our artistry.

You were in the bottom in the first episode. How do you think starting the competition on what could essentially be considered “the wrong foot” impacted your gameplay moving forward?

After the first episode, I was just mentally shooketh by being in the bottom for the talent show, especially as someone who has trained in dance. It was hard for me. I don't think I ever fully mentally recovered from that type of blow.

What classic challenge were you most looking forward to competing in that you didn't get to?

The Rusical, and also the rap challenge where we have to write our own verse to a RuPaul song.

So, you consider yourself a musician?

In my head, I'm a City Girl, so I was just ready to write a rap!

Is there anything in particular you’re upset you didn’t get to show off?

Yeah. I strategically went really hard on my photos because there are a lot of things I had planned that I don't think we have seen from a full-figured queen of color. I'm really excited to showcase some of the things you guys didn't see because I really invested the time on certain looks that I really wanted to punch ‘em in the face with.

Now that you’ve been on television, your career is about to change. As an official Ru-girl, what are you most looking forward to in your post-Drag Race career?

Well, I definitely want to consider doing drag full-time. This is how I look at it: I tell myself now, "If I got this far doing it part-time, imagine what I could do with being [a drag queen] full-time." So that's kind of where I am. Also, I would love to do fashion correspondence on the red carpets, asking people what they're wearing. That's kind of what I see for Ms. Jambalaya.