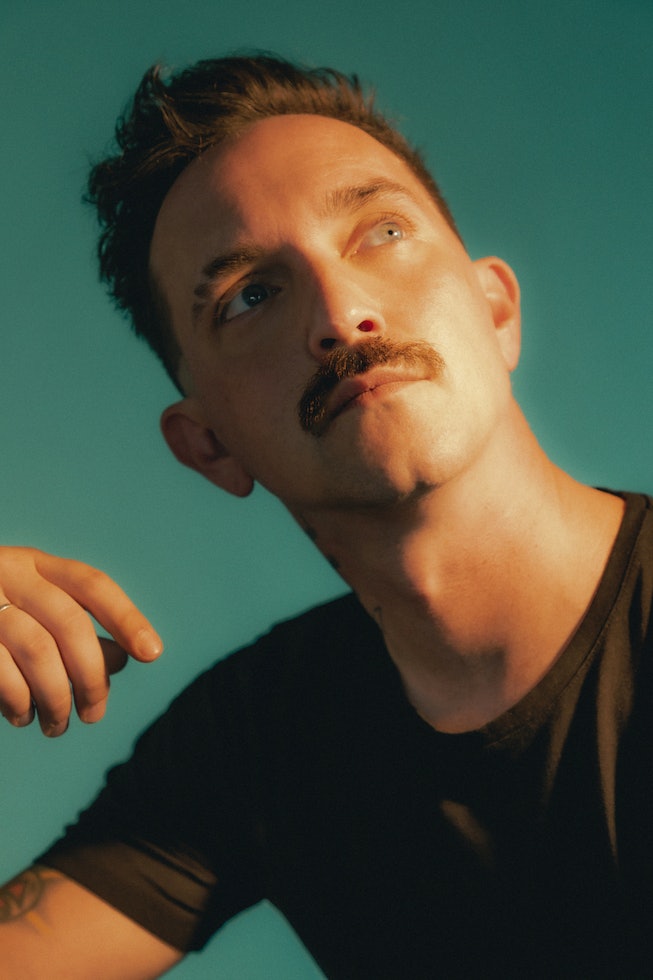 Ryan Pfluger’s book, Holding Space, is an intimate probe into the lives of queer interracial couples. Styled like an unassuming coffee table book, its glossy pages invite readers to flip through a collection of meticulously curated photographs. Pfluger has a keen eye, sharpened from years of training, and the images he’s captured are striking enough to evoke a story of their own. But the real tales — the ones that stick with you even after you’ve turned the last page — live in the fine print. Beside each photograph is a journal entry written by the couples pictured, which details the intricacies of loving each other in a world that doesn’t always love them back.

While creating Holding Space, Pfluger’s goal was to create an atmosphere for understanding. “It’s very much trying to discuss what intersectionality means and then what my role as a white person has to be in order for that to be authentic,” he explained. “The main thing was, I did not want to speak for anyone. I think I did that as successfully as humanly possible.”

The hardcover will be released in mid-November by Princeton Architectural Press, with a foreword from ZOLA director Janicza Bravo and praise from Elliot Page, Bowen Yang, Ryan O’Connell, and Jamie Lee Curtis.

In 2021 Pfluger photographed actor and comedian Rickey Thompson for NYLON’s Pride cover. Now, nearly a year later, we caught up with Pfluger to chat about the makings of his first book, Holding Space, and how he uses photography to explore the lives of others.

When did you know that you wanted to be a photographer?

I feel like I fell into photography. I was going [to school] for art history and decided I was tired of writing about dead white dudes. I decided to really go into photo my senior year of college and then went to grad school.

Do you remember what your first project was?

My first significant body of work was my thesis for grad school. It was a body of work on my father, who had recently become sober. I was kind of using photography as therapy, and we reconnected through that.

There’s a quote in your book about photography being “a vessel of healing.” Can you explain that concept?

For me, it's kind of how I live my life. I think that's the only way to explain it. My photography has become the mediator of what I want to do with people. I did a whole TED talk on how photography is therapy. It’s just a tiny little machine as this buffer between strangers. Over time, it’s made me realize how much it allows people to open up, and it all just comes back to the idea of being seen authentically and how little that happens for people.

Especially when it's someone else that's in control, not someone taking a selfie of themselves, or specifically hiring someone to make them look a certain way. I think that when it comes to the arts and photography also, there's a big control dynamic that is always in the hands of the photographer. My thing has always been releasing that, and allowing for there to be space for them — I say "collaborators" instead of "subjects" — to have just as much room for power in that dynamic as I do.

Can you walk me through your collaboration process? How did this project come together?

Everyone reached out to me. So none of it's me reaching out to other people, with the exception of the first four or five couples that were within my friend group, and like one or two other people that I knew would never see my social media posts about it. I'd say 95 [percent] of the couples that are in the book were complete strangers that also reached out to me to be a part of it.

That in itself changed the way the process was, because I wasn't curating it. Then, because it was during COVID, my main role was always that I just wanted people to feel safe, and to feel comfortable. So they decided on the location — if they were comfortable with me coming to their home or their backyard, or if they wanted to be in a public place.

Then, I spent probably between two and three hours photographing. I took the same amount of film for every couple. Even if there was a couple that I really loved, I didn't want to feel like I was weighing more heavily on that. Like, “Oh, now they're going to have more options of photographs to look at." I was trying to keep it very baseline. The same for everyone.

Did you get to know the couples before you photographed them?

Yeah, I usually spend probably like 45 minutes just talking before shooting, and then also through most of the process. That was the other thing, is that a lot of them gave me really interesting insights into their relationships, which aren't necessarily in the text in the book, because I didn't want to force anyone into publicly sharing anything that they weren't comfortable with. I think that was what made people so comfortable.

They knew that I wasn't going to take anything out of context, which is why I specifically didn't even want the text to be interview-style, or with prompts that you could read from me. It's all just first-person. I did a lot of getting-to-know during the photographing time, but also a lot of that was just for me to get an understanding of what their dynamics were — to help me with posing and where I would situate people. It makes it a lot easier to read body language when you know a little bit more about someone.

All of the pictures are really intimate. How did you capture that?

[I] definitely got some people out of their comfort zones, which I think is also important in making work like this. Even though it was [with] people that reached out to me and kind of knew what my work looked like — it was still for, I'd say the majority of the couples, their first time even being photographed together or having a professional photograph them. So, there’s a lot of things that you have to juggle to get people in the right place. There are times where I have to push a little bit more.

What would you say was the hardest part of putting the book together?

The text was the hardest part. I don't think that I really had any understanding of what it would be like to have 200 people try to understand a deadline. And also — without curating their texts in the same way that I did photographically — pushing people to be a little bit more personal, to tell stories that felt a little bit more authentically them, instead of things that were more platitudes and generalizations about, “This is what it’s like to be trans,” or “This is what it’s like to have left the Mormon community.”

There’s so many layers of things that are addressed, and I didn't want anyone to do anything or write anything that they wouldn't feel comfortable with family members or anyone reading. At the same time, it was like, "I want people to know you." Even though most of these stories are really specific, they're very relatable. I think finding that sweet spot with people, especially people that aren't comfortable necessarily writing, [or] especially aren't comfortable about writing about themselves.

What do you want readers to learn from the book?

Listening. I think listening and giving space to understand things. The amount of times that I myself made my own judgments about people or things before I met them during the course of this work was very humbling.

I had a photo friend ask me, "Are you in an interracial relationship? Like, are you trying to, like, show how great it is?" I was like, "No, it's actually like, well that was the starting point." That's actually really not what this is about. It's really about understanding people and how our differences, a lot of times, do make people fall in love with each other. But a lot of times, it may take years, but [people] also realize that those differences are what make you not able to be in love with that person.

I think there's a lot of relatability in that, that surpasses anything having to do with sexuality, or gender, or race, that we can all understand. So, I have a really high hope that this just allows people to have a dialogue in some way, of reevaluating how they actually look at things. That queer doesn't look like a certain thing, Black doesn't look like a certain thing. I think that we have all these preconceived ideas of just, "This is what the definition of this thing is, and this is what it looks like all the time."

Even with a hundred interracial couples, not a single one looks the same, has the same story. That's all my hope is, that people move past the Instagram culture for a minute, and the TikToks, and take five minutes to just actually live and exist in a space that is like, "Oh, I can learn something from this," or "Oh, like, this reminds me of my best friend, maybe I should have a more in-depth conversation with them.”

“Maybe I have had microaggressions against someone that like, I say that I love all the time, but we've never talked about it. And maybe now is the space that I can allow myself to do that." That's what I hope it brings. I hope it brings some sort of comfort and also pushes people to just look at the people in their lives differently.

What did you learn about yourself while making the book?

That I'm capable of actually finishing something. That's been a hard thing in my life, especially being a “working photographer” as I like to say. I also grew up poor, so, having to be a working photographer was the only reality I could really choose.

The beauty of COVID for me was that it allowed me to remind myself that my personal priorities are also really important. This [the book] had been an idea I had been sitting on for over a decade. So to allow myself to just finish that — and I still don't even think that it's finished, it really feels like the first chapter of the work I will be making for the next 20 years — I learned that as much as you think you know about people, you don't. You really don't. The only way that you actually can know is by having a conversation with that specific person.