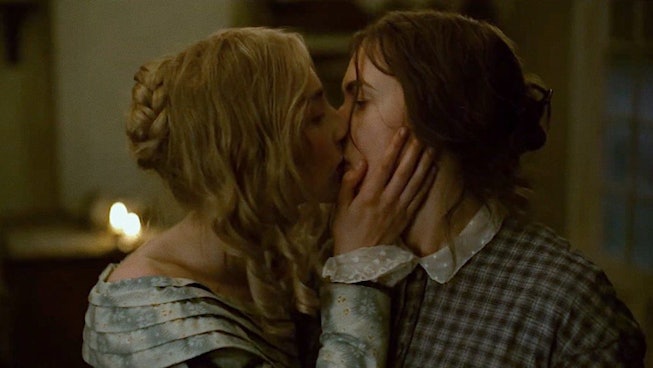 Can someone ask Saoirse Ronan if she's a fan of "Donatella" by Lady Gaga? Because apparently the Oscar-nominated starlet decided to ask her gay friends their advice before filming her new lesbian romance Ammonite.

Helmed by God's Own Country director Francis Lee, Ammonite stars Ronan and Oscar winner Kate Winslet as two women who fall in love in 1840s England while hunting for fossils along the rocky coast. Winslet plays Mary Anning, a real-life paleontologist whose contributions to modern-day science are severely under-discussed. Ronan, meanwhile, plays Charlotte, a young woman grieving after the loss of her baby. When Charlotte's wealthy but dismissive husband needs to travel abroad alone, he pays Mary to watch over his wife. The rest of the film follows the two women as they, well, I'm sure you get the picture.

While preparing for the film, both Winslet and Ronan went to great lengths to make sure they depicted the relationship shared between these two women as authentically as possible. In an interview with Variety during the Toronto International Film Festival, the 26-year-old Ronan even admits to consulting her gay friends for advice about what the film should look and feel like. While we may never know who said gay friends are, they (somewhat interestingly) told her that Disobedience (the 2018 Sebastián Lelio film starring Rachel Weisz and Rachel McAdams) was the only film that felt authentic to them. Aside from that, the friends “didn’t really feel like there were many movies that actually represented the lesbian experience, and went into the intimacies of that. Not just the sexual side of it, but just the relationships as a whole.”

In the same interview, Ronan also opened up about why she took the role in the first place, admitting that she was drawn to the fact that it felt like the antithesis of Little Women, which she had just wrapped. While the "kinetic" Little Women was "very sort of full of life and very busy in every scene” with "a lot of cast members in every scene that we would do and lots of talking," Ammonite, which largely plays out like a two-hander between Ronan and Winslet, felt more relaxed and calm. "I think just from an acting point of view it really interested me to play someone that was much more restrained,” she says.

Ammonite is out November 13th. Check out the first trailer here.