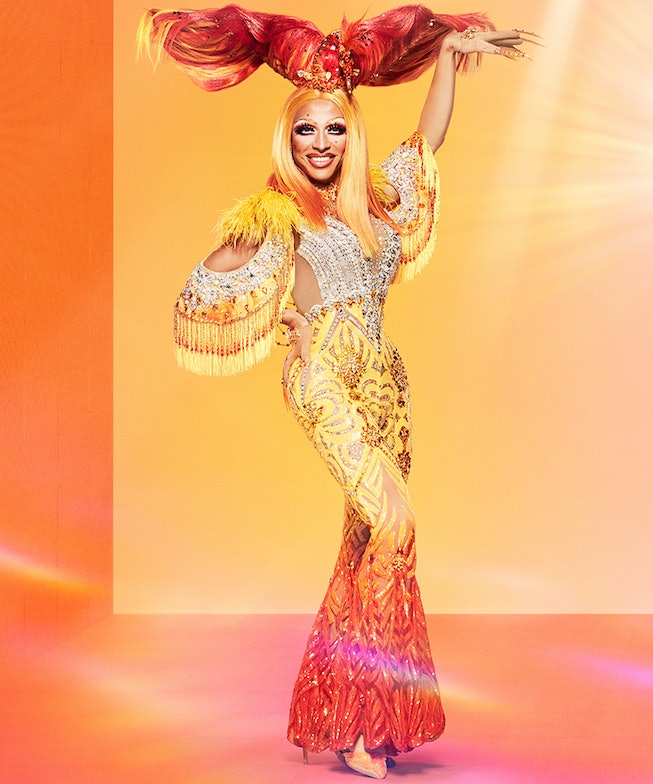 Few Ru-Girls are quite as notorious as Serena ChaCha. Eight years ago, the headstrong Fort Lauderdale-based queen sashayed into the Werk Room for season 5 of VH1’s RuPaul’s Drag Race and almost immediately butted heads with all her competitors. Whether she was calling other queens “ghetto” or bragging about her recently-earned art school college degree, the then 21-year-old was far from the season’s Miss Congeniality.

So it should come as no surprise that Serena, now 30, jumped at the opportunity to return to the hallowed halls of Drag Race for season six of All Stars. Now the successful owner of a thriving wig-styling business, the queen thought it was the perfect time to come back, fix her reputation, and show America who the new and improved Serena ChaCha really is.

Unfortunately, her time was cut quite short. Tasked with performing a talent for the season’s classic opening night variety show, Serena opted for a high-energy lip-sync performance to her song “Wig.” When all was said and done, however, the judges felt like the performance didn’t translate and she landed in the bottom opposite fellow competitor Trinity K. Bonet. In traditional All Stars format, the bottom two queens are not allowed to lip-sync for their lives; instead, their fates are left in the hands of their competitors. Tragically for Serena, all the other queens — except for the week’s winner, Yara Sofia — chose to send her home. So when Yara lost the lip-sync to the week’s lip-sync assassin, Coco Monotrese, it was Serena who was ultimately sent packing, her journey coming to an end before it really ever had a chance to begin.

Ahead of last week’s All Stars 6 premiere, NYLON hopped on the phone with Serena ChaCha to talk about going home first, why she’s sad she didn’t get to show off any of her new wigs on the runway, how she’s learned to deal with negative internet hate, why she can’t watch herself on Drag Race season five without leaving the room, and who she’s rooting for to win All Stars 6.

In your own words, what do you think went wrong leading to your elimination?

The people who voted and the people who selected to put me there [in the bottom]. I did nothing wrong. Sorry!

For the variety show, you chose to perform a song about wigs, which makes sense given your thriving wig business. But according to the judges, the performance itself didn’t necessarily translate the way you wanted it to.

No. The way I wanted it to translate is how I translated it. People just perceived it as something else.

Why do you think it was perceived in a way you didn’t intend for it to be?

There are many things to it. I think the music maybe could have been more explosive throughout. Or the rhythm could have probably married a little bit better — but hey, how do you marry hip-hop into a Latin beat, right? You don't! You just put them both in the mix and that's what makes dance choreography so entertaining. I'm just at a loss for words because non-dancers are getting props for just stomping their feet on stage. So it's all relative.

Are there any things that you would have done differently in retrospect?

No. I did what I wanted to do. I can’t tell you that [changing something] would have kept me there.

How does it feel for you to come back to All Stars eight years later and then be the first one to leave?

What people don't understand is that there's a flip-side to that. For me to come in so fast and leave so fast was the true reminder that I was already an All Star — since the minute queens started loving my business and my wigs. I have always been an All Star. I just needed the title, because that's what this beautiful Drag Race family has created. That's the upper echelon of drag, right?

So, leaving early? Well, it just was not meant to be. And can I say that I think I looked too damn good to be there? Absolutely. That's just my opinion as somebody pioneering in drag beauty. There were a lot of things that I would have edited. A lot of things shouldn't have even been in those [other queens’] closets. But that's just me. I'm molded by the queens that I work for. They want their things to look perfect. So I don't know. It's all relative.

There’s a moment in this episode where you talk about looking around and seeing how much talent was surrounding you. Were you ever intimidated seeing who else was there?

Well, listen. I'll never say who I thought would have been the weaker links because that's just not what I do. But people interviewing me always ask, "Oh, who were you surprised to see?" But they forget the positive side of that. Walking in, I thought a few girls would have been weaker links based on their entrance looks. But it was a flip side right after. That's why I reserved those opinions. But I was happy that everybody was there and everybody had something strong. Yet, if you still ask them, they were still surprised I was there. It's like they didn't think I deserved to be there. But I don't care. I'll take your money though. Let me make you some hair!

I’d like to go back to your run on season five. I don't think it's a stretch to say you had quite the rocky run that season. You butted heads with almost every queen you were competing against. How do you feel now when you think back to that experience?

I was bad. I was too young there and not polished. So I went home early. But then, I come back the complete opposite — flawless, honey! The entire drag beauty mall is on top of me! I’m wearing it!

How did it feel for you, eight years ago, to watch yourself on TV?

Can I tell you something? To be honest, after I saw it the first time eight years ago, I could never watch it again. If I watch it, I have to exit the room.

You still can’t watch it to this day?

I cannot and I will not. I've watched a few things that I've reposted, but I know exactly where to click. I avoid the audio, because it was really traumatizing for me. But that's how you cope with that. Maybe now I could laugh at it — just like, Haha! Remember that wig? Look at those wigs over there! But it's just something that, mentally, I would rather not put myself through.

What is it specifically about seeing yourself back then that makes you not want to watch it?

Well, you don't want to watch yourself being emotionally hurt by other people. And then, I was hurting back, right? We were just all defending. I don't know. Maybe this is how I become the Martha Stewart of drag — by never winning Drag Race. But they can keep bringing me back!

Has All Stars always been something you wanted to do?

Oh my god. Since the day I left season 5, I was ready for All Stars — at least emotionally. Drag-wise? I don't know.

What was the main thing you wanted to show and/or prove during your All Stars run?

My goal and my dream was to stroll down the runway with all the wigs I had worked so hard on. That's all I wish I would have done.

Given that you went home the first week, I’d assume you don’t feel like you accomplished that?

I know you own a thriving wig business. How did that come about and how is it going right now?

Well, I had to make wigs for myself and then somebody in the drag business had their eyes on it. They even wanted to buy the business! I had to be like, "Wait a second. I'm still working on this myself!” But it's a blessing to be able to live off of this, number one — especially recently, with the pandemic and the shutdowns. I always said I wanted to do drag full-time. I thought it would take Drag Race for me to do it full-time, but it actually took the wigs. Obviously, the notoriety is from Drag Race, so I'll always thank my Drag Race family. But I’m a full-time drag business worker now and I love that.

When you were competing eight years ago, the internet fandom did not play nearly as large a role in how queens from the show fared outside of it. Now, however, most of the fanbase is on Twitter and Instagram and they’ve been known to be quite vocal with their opinions. How has the fan response been to you returning this season?

Let me tell you something. I don't put stuff like this on social media because I have too much class to sit down and get back to some of these people, but some of these people are brutal with the comments they say and the things they write. They're brutal! I don't give a crap about what they have to say, but let it be known that we do feel what they say, we do hear it. And it's not cute to hear some of the things that I’ve heard. Like, eff these people. You don't know what it's like to walk in these shoes.

I think we're giving social media too much power. I have yet to ever go on someone else's page to defame them, to demean them. It's not what I do. But to a lot of those people out there: please put a mirror in your face and then try to click your phone before making another comment. The fact that we were chosen to be here out of all the other queens in the world, that's what should be celebrated. Whatever the results are, it’s just a competition. That’s what people forget. I just really hope the work speaks for itself. And at the end of the day, my clients and my customers, they're my number ones because they're the ones that believe in my work. And RuPaul too for bringing me back. I needed it for so long, but I'm glad it happened at this time right now where people need drag the most: right after a pandemic.

Now that you've been eliminated, who are you rooting for to win this season of All Stars?

Yara. I want Yara to win. People don't know that Yara Sofia is a genius. When she goes up there and just jiggles a breastplate — the power that girl has in her brain is something beyond measure. She could start a breastplate company right now and probably become a millionaire. I know she has an innate talent to come up with things that could change the drag world.

I also really hope Ra'Jah O’Hara could snatch the crown. She’s become a fierce competitor. I mean, we've been together doing photoshoots. (I have to thank my sisters for participating in a lot of the projects that I’ve gotten to do.) But I've seen Ra'Jah get photographed. In the minute it takes me to do my face, Ra'Jah has already finished her face and gone through two different looks. Just bam bam bam — that girl is a machine and I think she totally deserves the crown too. My third choice would be Jan. She's an excellent performer. She’s who I’d want to see at a drag concert really.