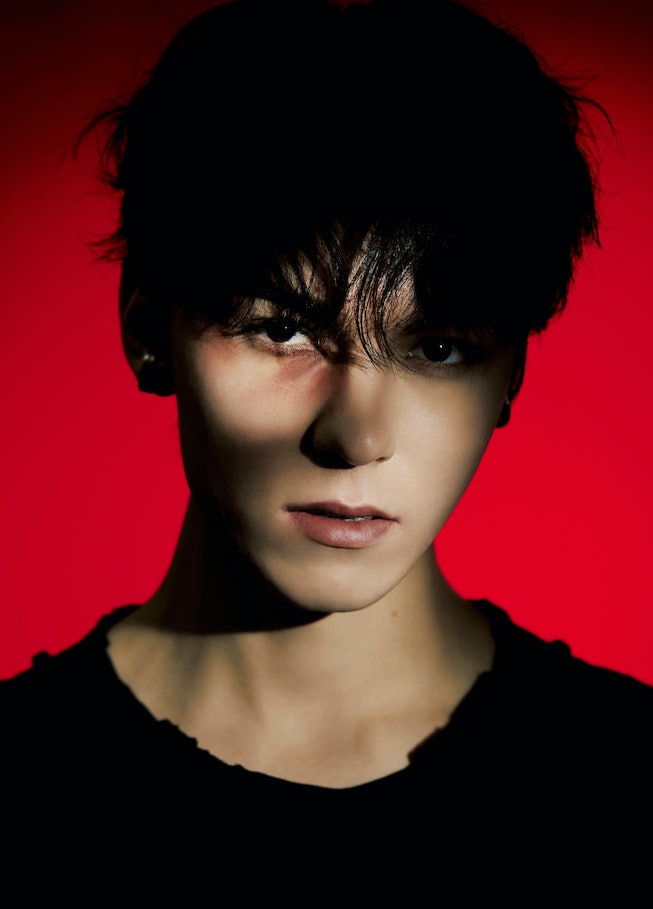 2022 has been a whirlwind year for Seventeen, who released their long-awaited fourth album, Face The Sun, the album's subsequent repackage, and embarked on a huge tour performing 30 concerts across North America and Southeast Asia. Somewhere along the road, in this case quasi-literally, band member Vernon found time to work on various endeavors without his SVT members, jumping on a remix of Charli XCX's “Beg For You” alongside Rina Sawayama, featuring on Omega Sapien's “Wrecker” — and, now, releasing his first solo mixtape, Black Eye.

The mixtape (which is just a single track, joining 2014's “Lizzie Velasquez” and 2015's “B Boy” and “Lotto”), released on Dec. 23, is the third installment to The Thirteen Tapes, or TTT for short, Seventeen’s ongoing project which collates individual mixtapes by different members and packages them with an interview and photobook. After Hoshi's Spider kickstarted the project in 2021, Vernon is now picking up the baton with a bang.

Straying from trap and hyperpop, two genres he's famously gravitated towards in recent years, “Black Eye” sees Vernon taking the pop-punk route. On the punchy track, Vernon strips the genre to its core elements: mixing kick and snare drums with steady cymbals and hi-hats, a melodic guitar opening with individual note-picking that quickly morphs into spiky riffage, and a catchy refrain. The tried-and-true, ‘00s-sounding formula applies both sonically and thematically, with lyrics infused with angsty teenage misanthropy and brooding resentment taking the reins.

“I'm on my worst behavior/ Don't stop me now/ I f**king hate this world/ So show me a way out/ Wake me up from this nightmare, please I can't stand this reality,” he sings on the chorus. Like the genre it pulls its main inspiration from, the song is pugnacious, boisterous, and unruly.

“I like how expressive [pop-punk] is. There was a sense of relief in writing and recording ‘Black Eye,’ I think, because it's outspoken.”

If you like to scrutinize song credits, you'll find some familiar names on “Black Eye.” Hoon-Ki Hong (whose name you might recognize from “Ruby,” “Snap Shoot,” or “Second Life”) worked on the song’s composition alongside Vernon, while Ohway! (“Cheers,” “March,” “Anyone,” and many more) was in charge of the arrangement. Robb Roy, perhaps the lesser-known name of the bunch, helped on the lyrics.

“This track was inspired by a mutual friend of mine and Robb Roy's,” Vernon tells NYLON of “Black Eye.” “He's a character, and there's a certain roughness, a sense of loneliness to him. We had him listen to the track first before titling it anything, and it's actually the friend who suggested ‘Black Eye.’ We thought it was a great idea; It suited that unpolished feeling of the track and the lyrics.”

Roy and Vernon's synergy traces back to Face The Sun, where the two worked together on one of its standout tracks, the autotune-ridden “Ash.” “When I was working on my part in ‘Ash,’ we were throwing ideas around, and things just clicked, so we began properly working together.,” Vernon says. “We started a couple of different songs around then, and ‘Black Eye’ was one of the ones we ended up with. He also worked on the artwork for this mixtape.”

“Everyone that worked on the mixtape are fans of [pop-punk],” Vernon adds. “I think our collective love for pop-punk naturally shows in the outcome. Pop-punk felt fitting to the imagery [and] lyrics that we had in mind when we started working on the song. I like how expressive [the genre] is. There was a sense of relief in writing and recording ‘Black Eye,’ I think because it's outspoken.”

Much like “2 MINUS 1,” a previously-released pop-punk track from Vernon and SVT member Joshua, the song is penned entirely in English — though Vernon says the decision wasn't deliberate. “The starting point for this song wasn't a particular language,” he says. “At first, it was a mix of English and Korean. As we refined the details, it felt like English would better shape up the general tone and the nuances of the song, so we turned it into an all-English song.”

Though only just slowly but surely tapping into the genre himself, Vernon has loved pop-punk since his teenage years. His admiration for Avril Lavigne isn’t a secret; Reposting images from her most recent promotions and throwbacks on his IG stories and Weverse profile almost seem to be one of his favored pastimes these days. He first heard about the queen of pop-punk in middle school, he tells NYLON, after performing a cover of “Sk8er Boi” for a festival with the school's band (he was the guitarist). He's been a fan ever since.

Vernon's pop-punk credentials expand beyond Canada and the U.S., though. “I'm trying to dig into Japanese punk rock,” he says of his current musical interests. “I think Ellegarden's ‘Marry Me’ was the first J-punk I encountered because it's well-known in Korea. It's been pretty widely used on TV here.”

Visuals play as big of a part in pop-punk as music — and Vernon is dressing the part for “Black Eye.” Biker elements, chains, fur, and slinky tanks all take center stage in the concept images, teasers, and music video for “Black Eye,” with Vernon's newly-dyed jet-black hair acting as the perfect accessory.

“The music video was shot in a way that doesn't feel as well-planned out or polished so that it visually complements that rebellious character of the track and the genre,” Vernon explains. Since production took place during SEVENTEEN's tour, in-between plane rides and rehearsals, all the band’s members played a hand in making it happen, whether it was showing up on-site to support or sending a coffee truck and food deliveries.

Though Vernon isn’t sure when he’ll next get the chance to step out on his own again, he’s certain it’ll happen. “I would like to continue exploring the things that interest me,” he says. “Both musically and in terms of the message, my goal is to create music that people, including myself, can relate to; to create music that people that I share interests with would also enjoy if that makes sense.”

As for now, aside from another tour stop in Jakarta later this month, Black Eye is Vernon's last hurrah in 2022, the perfect safety-pinned bow to a momentous year, personally and as a SEVENTEEN member. And though he might not be spending the last days of the year relaxing like most of us do, he is entering 2023 with a handful of resolutions — including learning to play the guitar again — and some valuable life lessons.

“[This year,] I've learned a lot about the things I can do better,” he reflects. “I've learned that I need to be more decisive and assertive to accomplish my goals. And in order to do so, I need to be knowledgeable about what I want. I plan to be better at that next year.”

Vernon’s ‘Black Eye’ is out now.