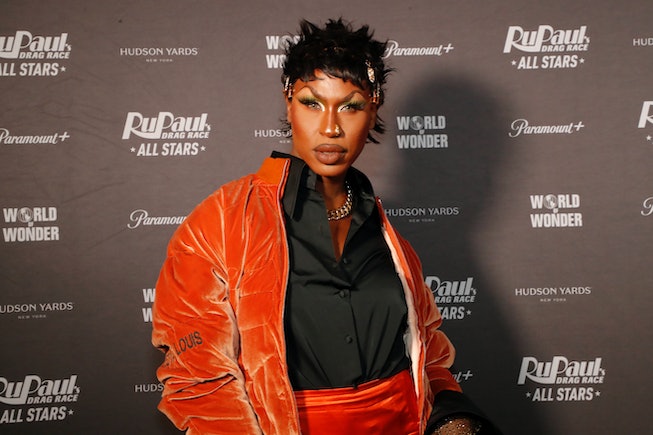 From now on, whenever I hear the phrase ‘stepping out on the right foot,’ I’ll immediately think about Shea Couleé. After finishing as a finalist in season nine of RuPaul’s Drag Race and returning to collect her crown in All Stars 5, the Chicago-based all-around performer (seriously: singing, rapping, dancing, acting — she does it all with ease) arrived to the all-winners season of All Stars clearly ready to snatch it all again. In the season’s first episode, Shea seamlessly dominated the “Legends” songwriting challenge with a perfectly rapped verse and effortlessly choreographed dance routine. She capped it off with a win in what has proven to be one of the franchise’s silliest, but most memorable lip-syncs (to Ella Fitzgerald’s cover of “Old McDonald”). And oh yeah, did I mention she did it while wearing off-the-runway Maison Valentino Haute Couture?

The latter stunt was part of the queen’s tireless mission to be “indisputably the most high fashion version of Shea Couleé” she can possibly be. But as has always been her case since first sashaying onto our television screens in 2017, this Mother of the Mansion Couleé drag house has continually shown that her fashion is great, but so is everything else. Give her a microphone and a beat, a needle and some thread, or some tough choreography and a well-lit stage, and you can always count on Shea Couleé to put on a good show. Though several weeks without a win has left the queen fearing that she’s been fading into the background, the audience clearly hasn’t noticed. Or if they have, they know it won’t be this way for long. Shea is always ready to strike. As she puts it, “There is still another half of the season to go. So that’s all I’m going to say.”

Last week, NYLON hopped on a Zoom call with Shea Couleé to talk about the tough competition on All Stars 7, struggling to understand what the judges really wanted, organizing “fashion PR moments” in order to bag high fashion looks on a budget, what every invitee to the Drag Queen BBQ needs to be able to do, why she loves watching the gradual expansion of the Werk Room, and the one Nip/Tuck storyline that inspired her to live her authentic truth.

We're more than halfway through the season now. How has the entire experience been?

It has been so much fun to go back and relive last summer. The fans have just been so amazing. I'm so glad they've been enjoying it because we enjoyed making it so much, and I love that all of the joy we had doing the show has been really coming across.

And look, we honestly shoot for twelve to fourteen hours a day, for two days, for every episode. That’s almost 30 hours [of footage] for each episode. There's just so much good stuff that really doesn't even make the cut, and we just had so much fun [doing it all]. There's got to be an extended cut of this [season] somewhere! They could literally make two other episodes out of [each episode] because we really did just have so much fun kiki-ing with one another.

You made a great first impression this season by starting off with a win for the very first Main Challenge. How did it feel to come out kicking like that?

Look, when I did my “Category Is…” verse on season nine, I came out swinging with that bat and I have carried that energy with me throughout the rest of my tenure on Drag Race, okay? You know Shea Couleé is going to come through. She will come swinging.

You haven’t won a challenge since then, and this week, you talked about feeling like you had maybe been fading into the background. Where do you think that was coming from?

I feel like it was a struggle. Because everyone is so immensely talented, and because the judges were giving such good and strong critiques [to everyone], it was difficult for me to rationalize what they were looking for from me. Because when you get a whole bunch of positive feedback, but then you are not in the top, you're like, Okay, well, I’m obviously not doing enough. But then you’re like, Well, will they tell me what I need to do? Will they communicate those expectations so I know how to come back next week and really knock it out the park? But you just have to pick yourself up by your thigh-high bootstraps and just bring it every single challenge, because that's just what [this competition] calls for.

You mentioned that it was difficult to figure out what the judges wanted to see because everyone, including you, was constantly getting good feedback. Do you think that is just a symptom of this all-winners format? Did it feel like everyone was always at the top of their game in a way that felt different to any other normal season of Drag Race?

Yes. Exactly. I feel like that was exactly the case. It felt like we were all navigating these new waters together, and I think the judges felt like that too. For them, it was just like, Wow, we're seeing such a high-caliber level of talent. How do we give out these Legendary Legend stars? How do we distribute the wealth? But, I mean, we're only about halfway through. There is still another half of the season to go. So that's all I'm going to say.

I love a slow burn!

Well, one place where you’ve never ridden in the back is on the runway. You’ve been bringing iconic looks to the Main Stage since you first competed on season nine, and you haven’t let up since. But I think that with each successive season, you return even better — or at the very least, more expensive. I mean, in this season alone, you’ve already rocked Maison Valentino Haute Couture and Christopher John Rogers. How does it feel to be able to incorporate such luxurious brands into your drag looks?

I really wanted to up the ante in that way. I feel like a lot of it is attributed to wanting to show my support for brands and designers, and investing in them and their shows. Honestly, I feel like I do a lot of really great networking in IG [Instagram] DMs. I will be in those comments and I will be boosting these people up. And then, it's just like you comment on one story, and then they see it and start chatting back, and then you start developing these casual friendships. So then, when RuPaul calls all of a sudden, you can be like, "Oh, hey, friend! Hey, Valentino. Look…y'all don’t need that 2019 Haute Couture piece this month, do you? You don't need that, right? Okay, well, can I hold it for a second? Can I just hold that really quick?" Luckily, they made it happen.

I think it's really about just developing these relationships. The other girls have been like, “Girl, I don't know how you do it.” And I'm like, “It's really just about opening yourself up and just taking a chance. Just saying, ‘Hey, I really love your clothes and I want to [wear them]. Can I please?’” Because it is expensive, no doubt. But that doesn’t mean Mama had to open up her purse, you know what I'm saying? And that made me strategic so that I could stretch my drag package and the money that I spent on it any further. I knew that I wanted to be economical about [how much I invested] because I was buying a house. So I was like, I can't go crazy trying to spend money on this drag package, so I really need to also make this like a fashion PR moment.

Most queens return for All Stars wanting to prove something, or at least to show off something new about their drag. What did you want to accomplish by coming back a third time?

I would say that I wanted to come in for this season and be just indisputably the most high fashion version of Shea Couleé that you've ever seen. I just really wanted to bring it, to just be so stunning on those runways. I also just wanted to come on and have so much fun with the other girls. I knew it was going to be an all-winners season, so I was just like, Okay, well I know all the winners.

There are only so many.

Exactly. And I've worked with all of them. We've been on tours and stuff like that together. So I was like, I'm fond of all the girls so I'm just really excited to see who will be there. The only one that I hadn't worked with prior was The Vivienne. But within two weeks, I was in love with her.

Earlier this season, you were talking about how a certain Ryan Murphy show inspired you to come out and live your truth. I must ask: Was that show Glee?

No. It was actually Nip/Tuck!

Agh, that makes sense. Can you tell me more about how Nip/Tuck played a role in your queer journey?

Interestingly enough, this storyline arc surrounded [main character] Dr. Sean McNamara's son having a relationship with a trans woman and then going to a bar to meet other trans women. He actually ends up meeting a character played by [Drag Race star] Willam, who later on falls victim to a vicious, transphobic attack. So then, her and her girls roll up on him and beat him up — you know, the girls handle their business. So then, he ends up in the hospital, and everyone's asking these questions, like, “Why did you get jumped by girls? How? What happened?"

So it eventually comes out, and they're all like, "Well, is he gay?" Whatever. Blah, blah, blah. Blah, blah, blah. But there's this one scene where he's smoking a bong in his room and his grandma comes in and he's just like, "I'm not gay." And she goes, "So what if you are?" And then, she just asks him, "Would you rather live a safe life or an authentic one?" I just remember that line really hitting me. It just blew my mind because it's like…that is really such an easy question to ask yourself. But it also shows that being authentic does require risk. But the risk is worth it, because at the end, what you're fighting for is your own happiness.

This season, you’ve talked a lot about who gets an invite to the Drag Queen Barbecue. I’d love to know what your qualifications are. What does every guest need to have?

That’s a qualification for life in general, if you ask me!

So, you’ve been on the show three different times now. What have been the biggest differences for you between each of those experiences?

It's funny. I've watched the Werk Room get bigger and bigger every single time. It's like the Werk Room grows. It's so cool to always come back and be like, "Oh, wow!" The Werk Room remodel is always my favorite. I love seeing what RuPaul does with the place whenever I come back.

And I’m going to love seeing what you do on the show for the rest of the season. From what you hinted at earlier, I just know you have some major tricks up your sleeve.

New episodes of RuPaul’s Drag Race: All Stars premiere every Friday on Paramount+.