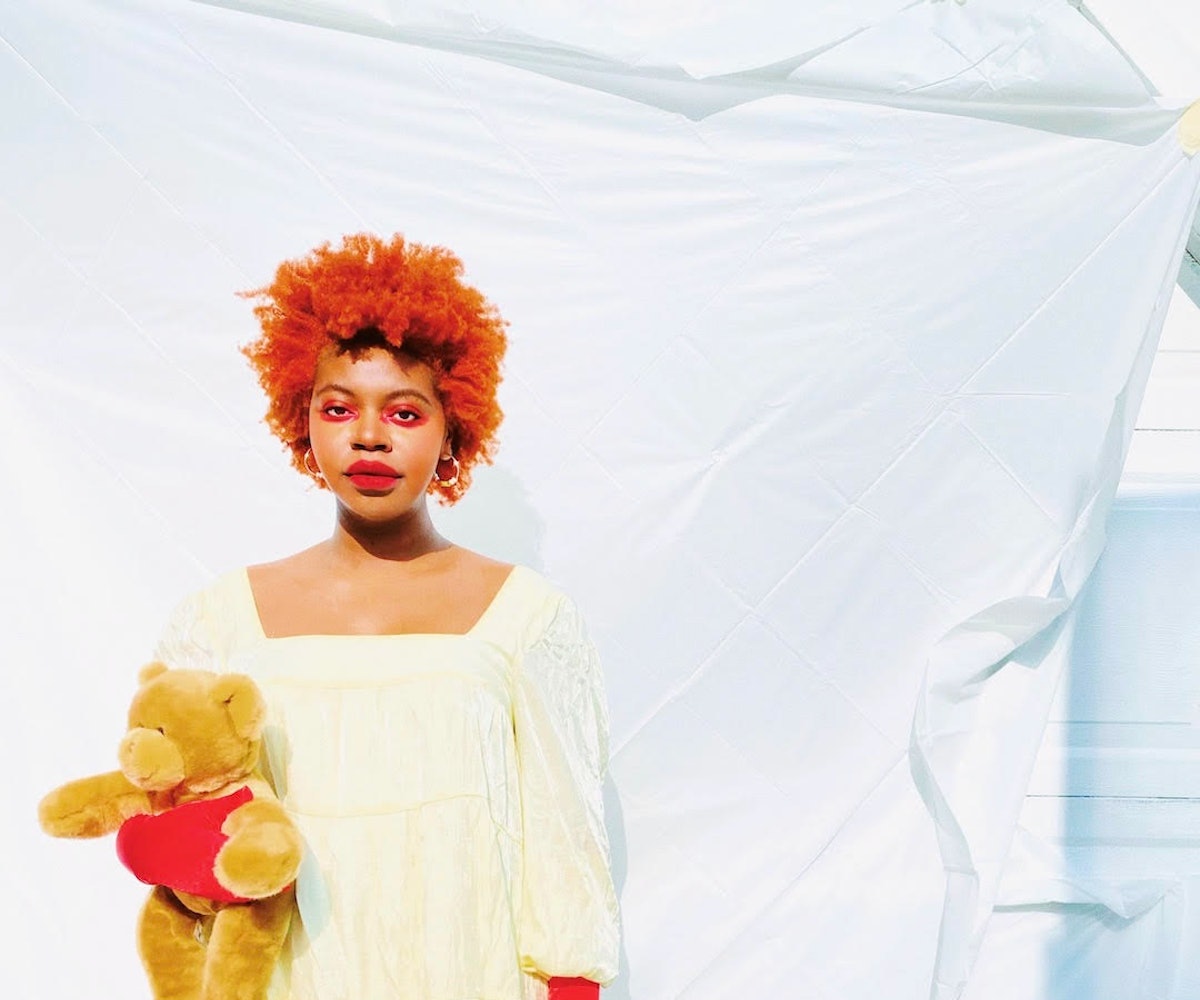 Simpson is a Richmond-based singer and rapper who you may also know as Babe Simpson, one-fourth of the Tumblr-born rap collective Barf Troop. They dazed the internet back in the early 2010s with their uncensored, forward-thinking rhymes and aesthetics, and even got the attention of Drake. Though the collective has gone silent in recent years, Simpson has since cultivated her own steady following around her soft, and ruminative tunes.

Her latest is "Cherry Ice Cream Sundae," a song about "treating ourselves with as much tenderness as we treat everyone else," she says, and is backed by a lush landscape of jazzy guitars and drums — a sound that could be considered a close sibling to the rap lullabies of Noname. Simpson's now sharing the song's peculiar video, which features a charming but eerie cast of marionette puppets, and premieres exclusively on NYLON below.

Over email, Simpson explains that she wrote the song after experiencing "a feeling that I’ve always been trying to put into words but I don’t think I was mature enough to be able to sing. I reached my breaking point where I was like, f*ck it, whatever happens, happens, and I’m gonna look on the bright side everywhere I can. I’m going to 'smile because I can.' I actually changed the original opening lyrics from 'The world is in the shitter' to 'Life is kind to who’s kind to it back.' The world has always been in the shitter, but that hasn’t made it any less special or sweet. I think that’s made me much more of a realist. I recorded it tipsy, upside down, hanging off my bed as a freestyle, and it felt so natural saying and listening to it back made me feel so proud."

Watch the video below and read on to learn a bit more about Simpson (as well as her thoughts about puppets).

I just put on a face mask and I’m watering my plants and watching D.C. devolve into chaos on the news. My shaggy rug under my feet is so comforting when I feel unnerved. I need to relax! I just moved into a new apartment so I’ve been trying to make it as homey as possible. I got a Supreme fish bowl for my betta and it looks perfect atop my David Bowie tabletop book. I wouldn’t put it on top of my Rihanna book! My kettle is on so I’ll have some ginger peach tea to sip while I work on some new music tonight.

What made you decide on marionettes for the video?

Puppets are amazingly unique and unrivaled when it comes to portraying a kind of surrealist landscape. Puppetry as a performance is becoming a sort of lost art, and marionettes are an amazing throwback. It doesn’t matter how realistic you try to make marionettes look, they will always be fantastically cartoonish, which is exactly what we were going for, especially with the different effects and backdrops. We had the pleasure of working with an amazing puppeteer, Audrey Densmore, and the life she brought to the creatures, some of which were her own creations including the cherry ice cream cone made just for this video, and she transcended all expectations with them, making a truly beautiful and graceful performance.

It’s often said that life can either happen to us or for us, and the only life that puppets have is the life we give to them, and as far as religion goes, people will always be searching for a greater meaning and wondering why things happen the way they do and if they’re really within our control. I think we’ve all wondered at some point if we’re in a simulation or if we’ll all just wake up from a dream, or hoped whoever has our voodoo doll today is kind to it, because all of these things must be out of our control and decided by someone else. So what if you could see it from their perspective?

Having moved on from Barf Troop, how do you reflect on that time in your life?

Essential. There would be no Simpson without BT, and I’ve always carried many of my same ideals and ambitions with me. And now from the ashes of BT, there is Smoke King, so we’re going to take our goals from way back even further now.

What can fans look forward to from you this year?

The first Simpson EP, lots of new visuals, some at-home acoustic performances, branching out into poetry and painting and jewelry, and many more chances to look into and become a part of my personal universe.