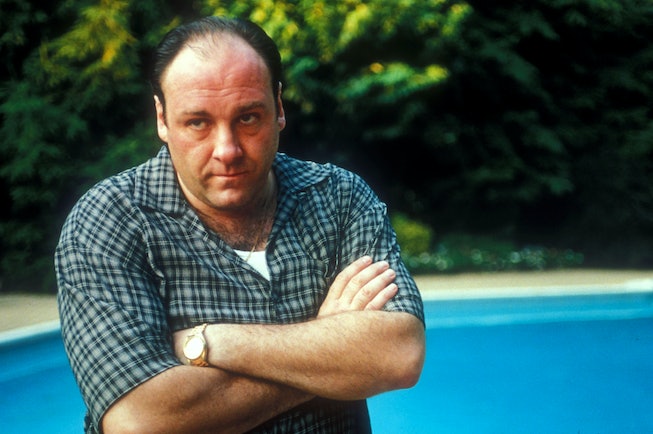 It's been over a decade since The Sopranos launched the existential question: What in fresh hell actually happened in the diner in the finale? Creator David Chase has been notoriously tight-lipped about whether or not his leading man Tony Soprano lived or died in the prestige series' final episode, but for the sake of the global pandemic, he's allowing a little suspension of disbelief. Chase wrote a brand new scene imagining how the beloved mobsters would have fared in through quarantine, and unveiled the scene on Michael Imperioli and Steve Schirripa’s podcastTalking Sopranos. Grab the gabagool, we're social distancing at The Bada Bing!

According to Schirripa, it's the first time Chase has written any Sopranos work since the show's ending in 2017. “Things are tough right now with all the bad news and things that are going on, it’s nice to have something to laugh about,” Imperioli said as he introduced the scene. “David thought it was important to bring some levity to the world, and he wrote these lines about the Soprano characters relating to the coronavirus.”

The scene includes many of the living and officially deceased key players from the Sopranos universe, and captured their essences without missing a beat; Adriana La Cerva is an emotional wreck, Christopher Moltisanti is waxing poetic about Hollywood, and A.J. Soprano is still disillusioned with the state of the world. It's all very delightful.

Listen to the entire "Pax Soprana" episode, and find the full transcription below, courtesy of Vulture.

PAULIE WALNUTS: Man, people call me a germaphobe. Big laugh. Now all I’ve got to say is: See, motherfuckers? And I knew some fuckin’ thing like this was going to happen. I saw the Holy Mother at Bada Bing.

TONY SOPRANO: Sports betting? Fucking gone with the wind, along with professional sports. Me and my friends are dying over here. The president might have a point. Let’s get business and manufacturing going again — by Easter, May Day, whatever the fuck.

MEADOW SOPRANO: I should’ve gone to medical school. I feel so bad about my decision.

CHRISTOPHER MOLTISANTI: I’ve been to Hollywood. Out there they should call it the swine flu.

ADRIANA LA CERVA: I’d volunteer or something. I feel so bad. I’ve been crying a lot, but I got an underlying condition. Irritable bowel syndrome, right? I can’t reach my doctor to find out if that would exclude me passing out masks or something.

DR. MELFI: I’m on the second line over the hospital. When and if those brave docs burn out, I’m out next.

A.J. SOPRANO: At one time I wanted to work for Trump. You believe it? Fuck me, dude.

CARMELA: We’re not doing well with the quarantine in our house. It’s making me face the music that this is a dysfunctional family. But it’s keeping my husband in, which is good.