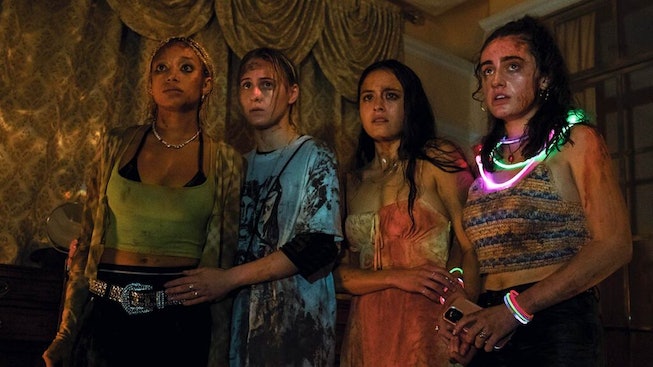 After two years of cancellations, Austin’s annual South by Southwest (SXSW) festival is back in action. Next month, indie lovers will get a sneak peek at what their favorite creators have been working on as several films and series premiere at the festival.

From Sandra Bullock and Channing Tatum’s action-packed adventure The Lost City, to Amandla Stenberg, Rachel Sennott and Pete Davidson’s surprise slasher Bodies, Bodies, Bodies, and the third season of Donald Glover’s Atlanta — the lineup is certainly well worth the wait.

The event will kick off on March 11th as always in Austin, Texas. Over the course of nine days, SXSW will showcase 99 feature films along with 111 short films, 24 music videos, and 29 XR (extended reality) titles. On opening night they are hosting the world-premiere of A24’s Everything Everywhere All At Once.

The sci-fi film, directed by Daniel Kwan and Daniel Scheinert, stars Michelle Yeoh as a Chinese immigrant who falls into an “insane adventure.” Per the log-line, “she alone can save the world by exploring other universes connecting with the lives she could have led.” Jamie Lee Curtis, Ke Huy Quan, Stephanie Hsu, Jenny Slate, Harry Shum Jr, and James Hong round out the cast.

SXSW was founded in 1987, and has since become a hub for digital creators around the world. In year’s past the festival highlighted a plethora of talented actors and directors, but their efforts were thwarted by the COVID-19 pandemic. With time off, however, the SXSW team has been able to re-imagine the festivities.

“The last two years have been complicated, and full of uncharted new waters for all of us. While there’s been innovation in building community in isolation and figuring out how to pivot, we’ve intensely missed being able to gather together,” Janet Pierson, the festival's VP and director of film said. “We are thrilled to share a bounty of creative work to experience together, in-person, with some virtual possibilities, as well.”

Registration for SXSW is now open. Those who get access will also receive a separate digital pass to SXSW Online. Per the event’s website, the digital component includes “live-streamed content from conference sessions to iconic film and music festivals as well as unique network opportunities and much more.” Fully virtual festival tickets are available as well for those who can’t attend the event in person.

Head over to the full SXSW lineup to see each project they’re presenting.

NEXT UP
Entertainment
19 Niche Music Festivals For Every Type Of Person
fashion
How ‘Spice World’'s Costume Designer Nailed The ‘Scooby-Doo on Acid’ Look
Culture
Loewe’s Howl's Moving Castle Collection Is An Anime Dream
Culture
The Madonna Biopic Is Being Scrapped
Style + Culture, delivered straight to your inbox.