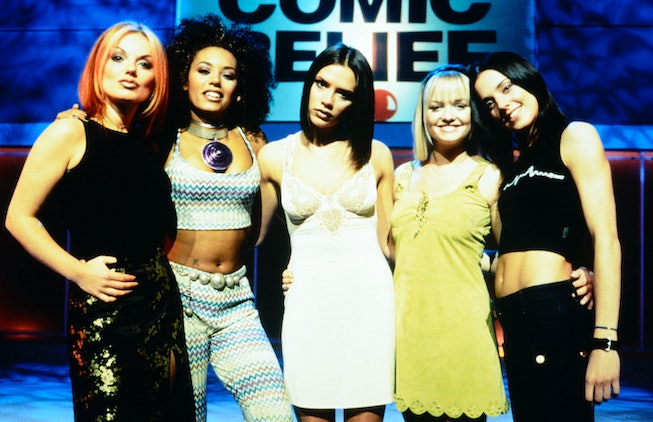 There was once a time when people thought that the most seminal music act to come out of the United Kingdom would forever be The Beatles. Those people, of course, were wrong. The U.K. has pumped out some of music's most enduring acts, but none of them had the chart topping hits, style, and girl power of the Spice Girls. Sporty Spice, Baby Spice, Scary Spice, Posh Spice, and Ginger Spice forever changed the course of the 90s with their breakout single "Wannabe," a high energy pop banger with that je ne sais quoi and ziga zig ah that defined the era. Since the 1997 cinematic rollercoaster Spice World is unfortunately a work of fiction, it's only fitting that the British icons get their pop star rite of passage: the forthcoming documentary, Girl Powered: The Spice Girls.

The documentary is set to air on the U.K.'s Channel 4 in 2021, and marks 25 years since "Wannabe" had its smash release. Girl Powered: The Spice Girls promises rare, archival interviews detailing the women's journey to international stardom and how they fought for success and recognition alongside the explosion of Britpop with heavyweights like Oasis and Blur. Again, The Beatles are irrelevant!

“The idea of using the story of the supremely popular and mould-breaking Spice Girls to make a multi-layered social history series was too good to pass up,” said Alisa Pomeroy, Channel 4 commissioning editor of documentaries. “The Spice Girls mirrored and influenced a generation of women and now, nearly 30 years since their formation, their story sheds light on the coming of age of modern feminism in ways we can fully appreciate for the first time.”

The Spice Girls officially split after a short but mighty run that earned them nine number one singles in the U.K. The group — sans Victoria Beckham's prim and chic Posh Spice — have twice reunited for sold-out comeback tours in 2007 and 2019. Naturally, news of the documentary is coming amid talk that the group will head out on a world tour in 2021 in celebration of their 25th anniversary, pandemic willing.

NEXT UP
Culture
The Madonna Biopic Is Being Scrapped
Entertainment
On "Princess Diana," Ice Spice Beats The Memes
Entertainment
See a First Look At Marisa Abela as Amy Winehouse In "Back to Black" Biopic
Culture
6 Shows To Binge Once You've Finished 'The White Lotus'
Style + Culture, delivered straight to your inbox.