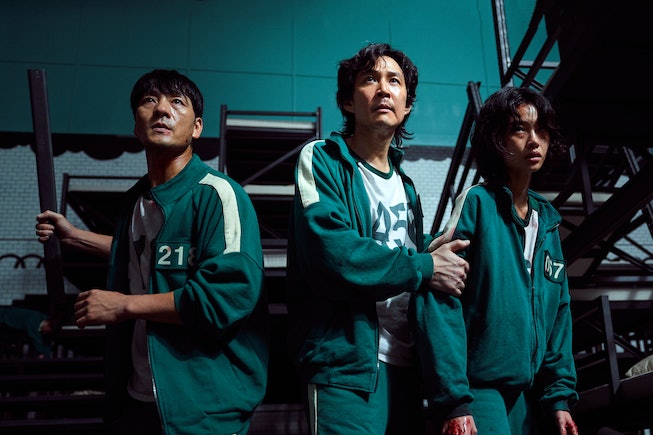 Do you think you could win Squid Game? Netflix is giving viewers of the hit South Korean drama the chance to put themselves in the ring and find out. The streamer just greenlit a reality series based on the show, and they’re looking for the perfect cast.

Squid Game: The Challenge, is being co-produced by Studio Lambert and The Garden. The ten-episode series will be filmed in the United Kingdom, but the exact shooting location is still under wraps. In the meantime, Netflix is looking to recruit players from across the globe. Their only requirement is that applicants speak English.

The competition series is shaping up to be a lot like its fictional counterpart — without the fatal consequences, of course. Variety reports that “contestants will go through a series of games inspired by the original show, plus new additions, which are all intended to test their strategies, alliances, and character as others are eliminated around them.”

According to Brandon Riegg, Netflix’s Vice President of Unscripted and Documentary Series, the plan is to utilize the structure of the original Squid Game to create the “biggest” game show ever. “Squid Game took the world by storm with Director Hwang’s captivating story and iconic imagery. We’re grateful for his support as we turn the fictional world into a reality in this massive competition and social experiment,” he said. “Fans of the drama series are in for a fascinating and unpredictable journey as 456 real-world contestants navigate the biggest competition series ever, full of tension and twists, with the biggest ever cash prize at the end.”

The casting page directs interested applicants to apply through either the “US,” “UK,” or “Global” portal. It’s unclear exactly how the show will play out, but it seems the casting agents are looking for the bravest contestants they can find. “The stakes are high,” they say, “but in this game, the worst fate is going home empty-handed.”

If you’d rather indulge in the fictional Squid Game universe, don't fret, Netflix has you covered. The streamer is simultaneously working on the next chapter of the original series. Hwang Dong-hyuk, the creator of Squid Game wrote, “Season 2 is coming. The man in the suit with ddakji might be back. You’ll also be introduced to Young-hee’s boyfriend, Cheol-su. Join us once more for a whole new round.”