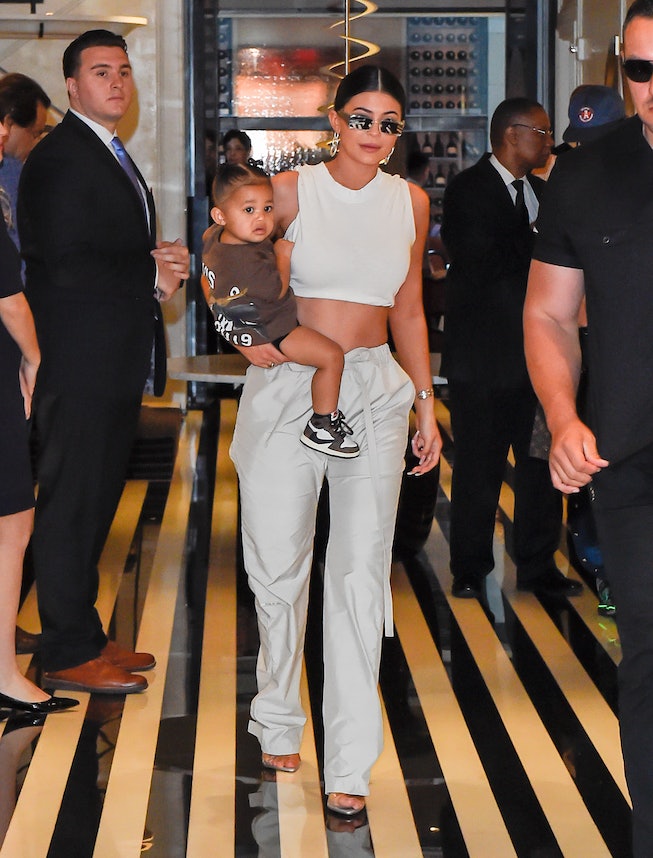 As if Stormi Webster wasn't already the busiest toddler in the world, now, the two-year-old daughter of (possible) billionaire Kylie Jenner and her on-again-off-again boyfriend Travis Scott has just received her first international fashion magazine cover. Yes, you read that right: Stormi Webster is now a bona fide Vogue cover star at the very tender age of two. years. old. The rest of us won't get that honor at any point in our lifetime, so that's certainly something to think about!

The youngest Jenner appears alongside her mother on the cover of Vogue Czechoslovakia for the publication's 24th edition. The cover, which has been labeled "Bedtime Story," shows the pair resting their heads on each other while looking directly into the camera. With a grainy, almost Matrix-like finish, the cover is unsurprisingly no-frills, capturing mother and daughter in an appropriately sensitive manner.

In a statement about the history-making cover, Vogue said, "#OnceUponATime, Princess Kylie Jenner was born into the most-watched family in the world. She has become the most powerful influencer on the planet, Stormi’s mother, a beauty mogul and it seems that everything she wishes for comes true."

The statement also offered some inside information into how the cover was shot, noting, "While Kylie and Stormi were quarantined at their home in Los Angeles, @morellibrothers photographed them exclusively for #VogueCS via Zoom call. Whether you prefer fairytales about successful princesses or evil queens, keep telling them. If we believe that the world can be a better place, it will become one."

As mentioned, the duo were photographed via Zoom by Luca and Alessandro Morelli (who go by the professional moniker of "the Morelli Brothers"). In a statement on their own Instagram, the renowned fashion photographers said, "So honored, during this incredible moment of global change and new consciousness awakening, to reveal our Social Distancing cover with the kind and beautiful Kylie Jenner and the princess Stormi Webster." Later, they added, "Here's to a new era with the power to cut divisions out of future generations and family culture, united through new technologies and caring for each other."

Take a peek at the new cover (and a "backstage" image) below. Issues hit newsstands on June 18th.