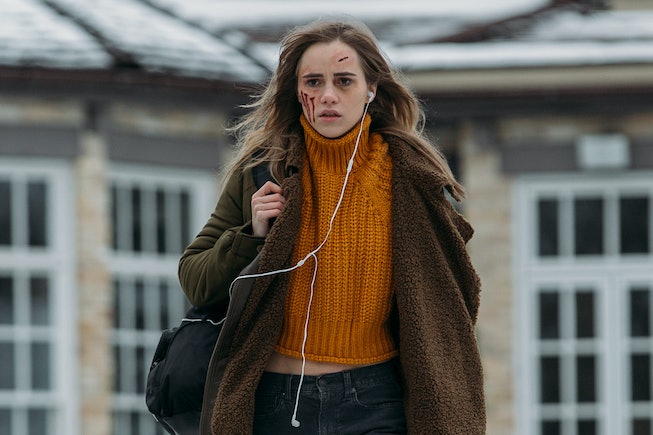 Suki Waterhouse is not in the mood to be typecast as the bitchy, hot girl. It almost happened in Seance, a throwback supernatural horror film and Waterhouse's latest project. She was nearly tapped as the film's textbook mean girl, Alice, until her take on the lead, Camille, got director Simon Barrett’s attention. Waterhouse wanted to bring a strange, quiet energy to the character, a British girl who transfers to an elite boarding school after another student mysteriously dies. She ends up doing just that, lending an eeriness to the film that's both striking and fun.

Part supernatural ghost story, part slasher thriller, and also part murder mystery, Seance has the atmospheric yet cheeky energy of a 2000s horror flick — a quality that drew horror fan Waterhouse to the project in the first place. "It excited me to something that doesn't take itself too seriously and has a weird sense of humor to it,” she tells NYLON during a phone conversation from her home in London.

The playfulness of the film is apparent from the get-go. There’s the wrath of a supposed Bloody Mary-adjacent specter, a masked killer on the loose, and a quintessentially American group of hive mind bullies. The premise itself — a mysterious new student replacing another student who died tragically — is practically an official part of the CW playbook. Sure, it's not the most polished film out there, but that's missing the point.

Instead, you get scrappy fight scenes that actually go hard, as well as quick, bright moments of humor, like my personal favorite, when the girls investigate the death of a student from 1998 with the same gravity as uncovering a secret from 100 years ago. You have to laugh! Waterhouse retains her mystery as her classmates drop like flies, only to disappear like nothing happened — now that’s some real hot girl shit.

Seance is now in theatres and available on demand. The following contains spoilers.

I do. I have such a strong visual for when I watched one when I was a kid, but I think I watched Silence of the Lambs when I was seven, and it scarred me and informed a lot of my general fears in life. I'm excited for the Amy Adams one, The Woman In The Window, that's about to come up. I definitely do indulge in the scary movie genre quite frequently.

What was it about Seance that called to you?

I wanted to do a teen slasher movie. It almost felt like a throwback to a 2000s teen slasher movie. It excited me to something that doesn't take itself too seriously and has a weird sense of humor to it. We made some strange choices. My character just feels like a different character in a different movie, and [we] did that on purpose. Then the other girls were more like all-American high school girls, and I'm just this weird British girl that comes in.

I read that Simon said that you had an interesting take on Camille and that made him realize that you would be a better fit for her than for his original pick of Alice. Can you tell me more about that?

I think sometimes people have more of an impression of me that I’m the bitchy, fun girl, but I'm like, "No, I want to be getting beaten up, and be quiet and strange." That appeals to me. We got to work with this fun, kung fu teacher. He's high up in his field of kung fu, and I got to go to his classes, which were kind of intense. It would be all these serious dudes in the class doing kung fu.

A lot of the movie is either you getting your ass kicked, or you beating down on these girls. It was intense and fun to watch. How was that training?

It was good actually. I hit him in the face by accident on my second day, which was kind of embarrassing to do that to a director. He was tearing up a little bit and I was like, "Shit!" [Laughs] But that was good. I enjoy that kind of life. I actually enjoy that, the physical and getting scrappy. We wanted the fighting to not seem obviously that professional, but actually, the girls were pretty hardcore in the movie with the way they hit each other. It was quite shocking. They don't hold back in giving each other quite intense blows.

When they beat you down in the library, I was like, "Oh, they're going for it. This is not a cat fight."

Yeah, she really wacks me.

Something about Camille is that we think she's one person, and then towards the end of the movie, when we find out that she's someone completely different. Her origins are shrouded in mystery. Did you find yourself building her backstory so that you could inhabit the character more?

Even though she comes in as a character intent on finding out what happened to the original girl who died mysteriously at the boarding school, in my head, she had actually not been great to this person and had a lot of painful regrets. Maybe she was more of a bully before. They were close, but maybe Camille wasn’t so great to her. I felt like playing with that extra layer. We toyed with the idea that I was maybe putting on an English accent and I was going to reveal I was American. [Laughs] I just thought it was too much.

Do you consider yourself superstitious at all? Do you believe in ghosts?

I definitely do believe in ghosts. I don't know if I have that sensitivity, but my sister is so sure that my house in L.A. is really haunted.

Yeah! Every time she goes, she's like, “You've got spirits here or there’s people here. She woke up in the bed next to me saying there’s an old witch and it's hanging over us. I totally am a believer and I'm into it. It just hasn’t come to me. Have you seen that movie Sinister?

I watched it at 2:00 a.m. at my friend's house when I was like 16, and then had to drive home 15 minutes [when it was] pitch black. I felt stuff [then]. Definitely when you’re a teenager and you smoke a joint and watch these movies, things can get a bit crazy. Texas Chainsaw Massacre, The Shining, those ones got to me. You definitely can freak yourself out.

Did you freak yourself out at all while shooting?

We shot the film in Winnipeg, which was quite a crazy place to go, to be honest. It was like in the middle of winter and it was freezing. It was very isolated and actually, all of the girls that I was shooting with, the place kind of wore on us. I think the movie, too. It does get into you. Not that supernatural stuff was going on, but you lose your mind with all that.

I was alone a lot of the time because there's nowhere to go at night. We can't go outside. I just got super into reading astrology apps, that was my supernatural moment.

How did that go for you?

I got supernaturally into them and felt like all this awful stuff was coming to me. I went so far down the rabbit hole. I had to delete all of them.

Speaking of rabbit holes, I was scrolling through your Twitter and I saw you love Lisa Vanderpump and The Real Housewives franchise and now I’m dying to talk to you about it.

It's an anthropological study of wealth and domesticity as far as I'm concerned.

That's exactly it. Men have football and games, and that's why they understand each other and bond. I do think that The Real Housewives is our bond. There's something about it. That’s how women understand ourselves better. We watch other women, kind of grow and change, but also not grow and change. I don’t like when people shit on reality television because I think that there’s a much deeper, nourishing part to it, and that it's actually quite meaningful.

I agree with you. I feel what you were saying, that we understand the nuances of the rivalries, growth, and the downfalls. I also just watched all of Vanderpump Rules and now cherish Lisa Vanderpump.

I know, me too! I also wish I knew more about her because she's English. I'd be fascinated to know more about how she grew up. I see a weird part of myself in her because I left for L.A. with an older man at 21 and didn't come back for a while, but I did come back. I also haven't quite had her trajectory. [Laughs] Maybe I could have been like her.

Next time you're in L.A. you can pull up to Villa Rosa and be like, "Lisa! Let's sit and talk."

I know, I have been fantasizing about that.

This interview has been edited for clarity.

NEXT UP
Culture
Loewe’s Howl's Moving Castle Collection Is An Anime Dream
fashion
How ‘Spice World’'s Costume Designer Nailed The ‘Scooby-Doo on Acid’ Look
Culture
The Cutest Couples At The 2023 Grammys
Fashion
Jenna Ortega Is The Face Of Adidas’ Newest Line
Style + Culture, delivered straight to your inbox.