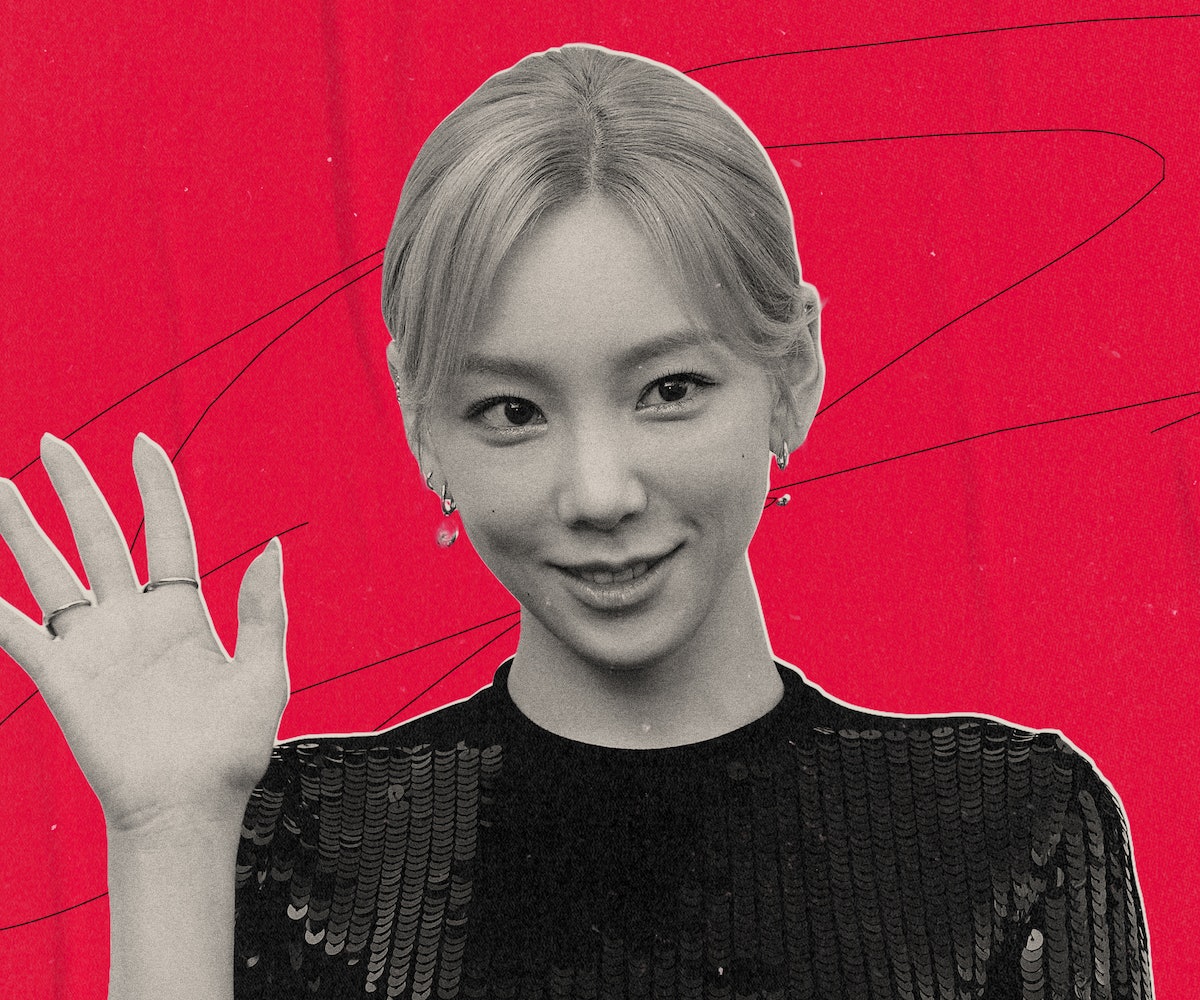 Envy is an emotion we often experience in secret. It triggers comparison, shame, and an inevitable feeling of disadvantage for desiring what others have. When Taeyeon channels that emotion on her song “INVU,” her rawness shoots through this veil like a brazen arrow.

Off her third solo album of the same name, out February 14, “INVU” flirts with synth pop and house to depict someone who is tired of loving too much — a fitting theme for all the barren and broken on Valentine’s Day. Upon hearing the single for the first time, she tells NYLON over email that she was “immediately drawn to this type of genre,” and that it influenced the choice of the other tracks on the album. “From sharp emotions to deep wounds, I wanted to express a wide spectrum of feelings in a way that’s not too obvious or predictable,” she says. “I wanted to convey them in a mystical way.”

Mystical might be the best word to define “INVU”. In its music video, she is part-Greek goddess of hunt, Artemis, and part-Lord of the Rings elf on a deserted planet. With icy blue hair and a constellation of crystals, diamonds, and pearls adorning her hair to her nails, Taeyeon has never looked more ethereal. She shoots the moon in an attempt to stop the suffering. A heart of glass materializes in her hand, only to dissolve in glitter. Out of the 13 songs in the album, the single remains her favorite: “The way I approach love is similar to how [“INVU”] describes it, so I feel a little more attached to it,” she says.

INVU- The 3rd Album arrives at a big moment in Taeyeon's career. The 32-year-old veteran, best known for being the leader of the beloved K-pop girl group, Girls’ Generation (SNSD), debuted at the top of 2022 as a member of new supergroup GOT The Beat, and was recently named the highest-selling female K-pop artist of the past decade according to the Gaon Chart run by Korea’s Music Content Association (KOMCA). With cumulative sales of over 1 million copies since her 2015 solo debut with the EP I, she believes the reason why so many people relate to her songs is because she expresses in them the whole range of human emotions. “I try to capture every little detail through my music,” she says. “My vocals reflect my personality. I sing as if I’m saying the lyrics in real life.”

Taeyeon, whose name in Korean is homonymous to the words “cool” and “calm,” defines herself offstage as “pretty simple,” a person who “enjoys the little things and loves having fun.” Although many fans call her King Taeyeon (a play on her last name, Kim), humbleness comes across in each of her answers to NYLON. A known homebody and a Pisces, she relates to the inner freedom of that Zodiac sign. “I heard there are many Pisces artists who like fantasy and daydreaming, and are full of imagination,” she says. “I would say I have the soft and gentle personality of a fish that swims freely in the water.”

On the other hand, the artist Taeyeon “has a lot of thoughts. She is profound and complex. She is also more aggressive, because she thinks communication is very important,” she says. Connecting with others is the engine that helps her make sense of the world. “I think singing is the most beautiful form of empathy and communication,” she adds. “I could sing the same lyrics, but I’m able to make it my own and express my emotions through my vocals.”

As a kid, Taeyeon remembers being very quiet, someone who didn’t enjoy standing out too much. “I wasn’t a fun kid,” she says. “It was always school, home, school, home. I was more excited and outgoing when it came to music rather than studying.”

In middle school, she started to pursue her passion by attending vocal lessons at SM Academy, a former institution affiliated with SM Entertainment, one of South Korea’s most long-standing and top entertainment agencies. Every Sunday, Taeyeon and her dad traveled for nearly two hours from her home in Jeonju to Seoul, where she took classes with singer and vocal coach, The One. After three years of training and praise from The One for being a notable student, Taeyeon finally signed a contract with SM Entertainment and made her debut in 2007 as a member of Girls’ Generation. Their unwavering success and influence earned them the title of “Nation’s Girl Group” with iconic songs like “Into the New World,” whose symbolic message became popular in protests and manifestations; “Gee,” one of the most quintessential K-pop songs of all time; and the fascinating, all-in-one “I Got a Boy,” which holds as many tonal shifts as members in the group’s lineup at the time, included among their catalog.

“I can see my career building up more clearly, and it drives me to try something new and different for the next release.”

“Our schedule was always packed, so we were constantly on the move from one schedule to the next. I don’t know how we did it,” Taeyeon says of her time in Girls’ Generation, which went into an indefinite hiatus in 2017 but briefly reunited in 2021 for a special appearance on tvN’s variety show You Quiz On The Block. “Now that I think about it, it helped me grow into the artist that I am today.”

As prodigious as they are, Girls’ Generation is only a fraction of Taeyeon’s realm. Aside from her prolific solo career, she also took part in two subunits of Girls’ Generation (TTS and Oh!GG), participated in the collective SM the Ballad, and started 2022 by debuting once again with GOT The Beat, a girl group comprised of four generations of female idols: legendary soloist BoA, fellow Girls’ Generation member Hyoyeon, Red Velvet’s Seulgi and Wendy, and aespa’s Karina and Winter.

“I remember looking at us in the mirror while practicing ‘Step Back’ and I couldn’t believe this was happening,” she says of the group’s debut song. “It was such a special experience and I loved working with all the members. They’re all talented artists and I learned a lot by practicing with them.”

After nearly fifteen years in the industry, the singer says her journey so far has felt like “traveling alone,” with many highs and lows that were sometimes so low they led her to feel lost. But overall, she describes it as “a journey of self-discovery.” Her first and second studio albums, titled My Voice and Purpose, respectively, reflect that journey as they allude to her fundamental and most reliable compass: herself. “I feel myself becoming a stronger artist as I release more albums,” she says. “I can also see my career building up more clearly, and it drives me to try something new and different for the next release.”

That’s where INVU fits in, challenging Taeyeon to experiment with new styles and ways of communicating. She is gritty and desperate on the rock-influenced pre-release single “Can’t Control Myself.” The 808 bass break on “Cold as Hell” makes the song one of Taeyeon’s most experimental to date. But mostly, she glides through her mystical intention for this album with delightful disco breezes and synth-pop beats on tracks like “Toddler,” “Siren,” and 2021’s pre-release “Weekend”.

From the album’s breathtaking teasers to the promotional exhibition set up in Seoul, INVU reveals Taeyeon as an artist who is acutely self-aware. In a message written by her at the event, she states: “I know that if I don't love myself, I can't love others.” Unafraid to evolve and to look closely at her own soul, she experiences life in its fullness. “I try my best to be good at [expressing emotions] and to capture them in my music,” she says. “Truthfully, I am still in the process of getting better, because it’s not something that happens overnight. The more honest you want to be, the more cautious you become. This is only natural.”

As for envy, the feeling itself, Taeyeon says that it sometimes comes up when she feels unable to achieve something. But she quickly brushes it off, entertaining the idea that it might happen in her next life. “For example, I gave up on height a long time ago,” she says. “I don’t let envy get to me. I try my best to find my qualities. I am thankful for what I have and who I am.”