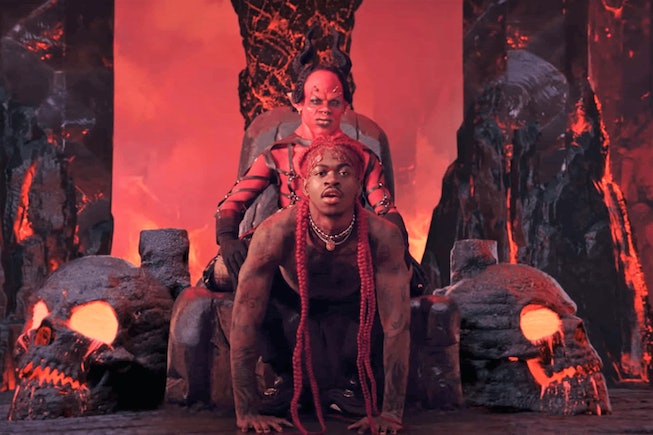 You might not recognize Tanu Muino’s name yet, but you definitely know her work. The 32-year-old Ukrainian photographer and videographer is the mind behind some of pop’s biggest music videos this year, from Lil Nas X’s literal dance-with-the-devil visual for “Montero (Call Me by Your Name)” to Lizzo’s Greek mythology dream for “Rumors” to Normani’s “Wild Side.” In a year when all art has begun to feel a bit stale, Muino’s visuals have offered fantastical escape — and spurred a lot of online discourse — a sign for any creative that you’re doing something right.

The past year has been a veritable golden era for Muino, who first began shooting music videos for her boyfriend seven years ago. She’s now nominated for several VMA awards including Video of the Year and Best Director for her work on Lil Nas X’s “Montero (Call Me by Your Name),” an achievement that she says is also resonating back home. “Everybody was shocked and congratulated my family and my friends,” she says over a recent Zoom call from her home in Kyiv. “I think even artists from Ukraine are very proud.”

Ahead of the VMAs, we caught up with Muino about her momentous year, the making of Lil Nas X’s “Montero (Call Me by Your Name),” her own MTV obsession, and her key to making a memorable music video.

How did you get into video directing and making music videos?

Before, I was a photographer for two years, but all my friends and my boyfriend were musicians in Ukraine. So what started it was [my boyfriend] had a very good song, so he needed a video, but it was hard to find director and money. So he says to me, “You need to make me a video.” And so, I made him my first video, maybe it was seven years ago. And this song and video became very popular in Ukraine. And then other artists start to reach out and asking if I can do a video for them too. So, this is how it starts for maybe two years, only a few artists, indie groups and stuff. But now my friend, he’s become like the biggest artist in Ukraine and Russia, and we collaborate all the time. And that's how Frank [Borin] from America find me, and we started to collaborate, and he introduced me to our commissioners in U.S.

Were you big into music videos before then?

Well, as I was a child, I was watching MTV, and watched like all day. So when I go to school, after, I would sit at the TV and see MTV all day. I think it comes from there. I know all these old videos, and I love to see how it was made and all the stuff. And I was a dancer before. So all this I think interests me a lot. Also, I love to go to the theaters and to see the old musicals. It's my favorite thing to do.

What’s a music video that’s has impacted you greatly?

I love all the videos of Michael Jackson. I think [those are] my favorite ones, and the Britney Spears videos. I think I was watching the dance choreo and all these costumes, and I was into how they built other worlds and distilled them and make it like this. I think these two artists [and] Madonna.

You kind of had your big break when you did Cardi B’s “Up,” which was at the beginning of 2021. Given how big of a celebrity Cardi B is, was there a big difference working on that music video versus the projects you were doing before?

I was super nervous for her because she's so big. But when I met her, she was so funny and open and easy working and laughing, so it was very fun. You feel like it will be super different, but I think that artists like Cardi, Lil Nas, and Rosalía, they know what they're doing. They know they found connection with you because they know that you will do the video for them. So they’re open to ideas, working, collaborating, talking. So it was easier than I thought.

Let's talk “Montero (Call Me by Your Name).” Whose idea was it to have Lil Nas X slide down a pole and give a lap dance to the devil?

So, I was shooting Cardi B’s “Up” and suddenly there’s a brief for Lil Nas, and I think it was the greatest, funniest brief ever. So he just pulled his thoughts and pulled some very funny pictures for what the story is, like what he wants to do, but he don't know how to make it happen and where it needs to be, the kind of world or everything. Overall, yes, it was his idea and what he wanted to do, but he didn’t know where and how and what kind of world he wanted, all this stuff.

What was your reaction to his brief?

I love something like this: crazy and devil stuff. I don’t know why, I’m very into this stuff. When I was reading, I was immediately imagining what I see in what world, so it was very fun to make it happen. I was inspired by old paintings. For me, I was two days on the road and started to find all these inspirations, old pictures from [Hieronymus] Bosch and all this stuff.

What did you think of the huge reaction and criticism the video received?

So, while I was shooting it and making it, I was thinking it was kind of provocative, but I wasn’t thinking, This is too much. So I was quite shocked that it was so big and have so many reactions. Of course, some of them was like super crazy and some of them was fun. You know, “I’m from Illuminati and Lil Nas too, and there's some plan.” [laughs] That’s very fun. But I was shocked that there was so many responses, that everyone’s talking about it and asking all this stuff.

“I was thinking it was kind of provocative, but I wasn’t thinking, ‘This is too much.’”

Did you get more requests to work with you from artists after the video?

Yeah, of course. It's opened new doors, for sure. For me, it was my first CGI video and before, I was very scared to make it happen because it’s super hard to put your thoughts to somebody else’s head so they can make it possible. So it was very hard work. Two months of making this world great. So, yeah, after [“Montero (Call Me by Your Name)”], I think many doors opened for me for CGI projects because [of] just being able to create your own worlds.

You are so detailed in your world-building. Why is building a new world more interesting to you than a video that’s set in reality?

I think because I like to create new styles, new personalities, a lot of costumes. I like fashion a lot. I was a fashion photographer so I like all this stuff. Also, I’m very into architecture. I like to travel and see all the crazy buildings, some famous architectural works. So I think a combination of architecture and my love of fashion.

Finally, you’re nominated for a bunch of awards at the VMAs this year. Congratulations. What do these nominations mean for you, if anything?

As I was telling you, when I was a kid, I was watching MTV all the time. So when I got nominated, I was shocked, and I was celebrating for like maybe three days. I think for me, it's the most important nomination ever because I'm an MTV kid. So, very important.