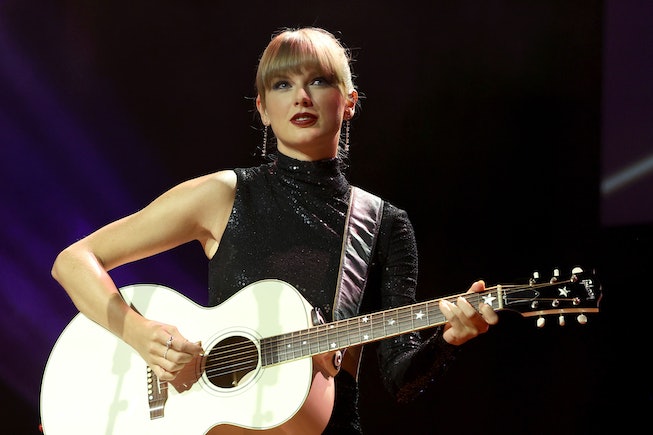 To engage with a Taylor Swift album rollout in this day and age means opening yourself up to a trove of madness. There are the Easter eggs, hidden clues, and cryptic messages ready to be deciphered — all reasonable, fine, and par for the course on any huge pop release. But dig a bit deeper, and you’ll find fans counting the letters of her songs, engaging in complicated numerology, and approaching her music like Tom Hanks in The Da Vinci Code. Say what you want about their methodology — it’s sensible, chaotic, unhinged — but being a Swift-ophile has clearly become its own cottage industry.

To a degree, Swift has encouraged the hyperfixation and close reading into her own carefully crafted mythology, and we can’t deny there is genuine fun in trying to predict the next moves of someone who, at this point, has become a figure larger than herself. While there’s a lot of far-fetched predictions floating in the internet ether, there are also a lot of reasonable Swift academics, like TikTok’s @Moonybug, a user who makes videos analyzing all things Swift and shares her predictions in a compelling way.

I first came across @Moonybug — real name Elizabeth Lyle — on the eve of the 2022 VMAs, when Swift announced her upcoming tenth studio album, Midnights. Lyle uploaded a TikTok analyzing the design elements of the album, zooming into the details of its color palette and font selection. “I think what stood out to me most was the lighter element of it, because it's so evocative of that idea of playing with fire,” Lyle tells me weeks later. “You're already thinking, ‘Okay, she's about to do something.’”

As Swift’s Midnights rapidly approaches, I reached out to Lyle to see what else she could make of the record, Swift’s most talked-about release in years. Below, Lyle and I discussed everything from the record’s ‘70s theme, song titles, Swift’s obsession with superheroes, and why Midnights could be Reputation part two.

How long have you been a fan of Taylor, and what do you do for a living?

I love this question because I think it goes hand in hand. I always loved reading growing up, and so I went into English literature in college. I now do writing and instructional designs, so I make online courses. My interest in Taylor Swift's music started around Fearless. When Fearless came out, my parents bought me that CD. I was obsessed with it. And then I had this on and off relationship with Taylor's music but I always overall liked it. It had more to do with the love of her music and the lyricism within it, because it does a lot of the times feel like something you can unpack and repackage however it fits your feelings at the time. And that's what I loved to do with reading. I continued it with TikTok, because I missed writing essays, and so I was like, "I want to write again."

Let's dive into Midnights. You made a TikTok where you talked about the album’s aesthetics as a return to the Tumblr 2014 era. Could you break down that video for me?

I think what stood out to me most was the lighter element of it because it's so evocative of that idea of playing with fire. You're already thinking, "Okay, she's about to do something." It's also this edgy thing, when you would go on Tumblr and you'd see someone holding a lighter or a cigarette or glittery makeup, it's all this hard exterior. And now, looking at the images she's released since with the four new albums front and back, there's definitely a ‘70s style to it. And the more information we get, the more I think she's going to play with this dichotomy of who people perceive her as and who she really is.

All of her public appearances so far have been very glitz and glam, that bejeweled dress. And now she has a song coming out, “Bejeweled.” And then the ‘70s pic, it's almost like she's taking us back to when the Studio 54 party is over and we're back in the hotel room and she has her head in her hands, she's obviously distressed about something. I think she's definitely going to play with the idea of her being someone very outwardly beautiful, so opulent, just dripping in jewels and sequins, versus in the motel room looking sad, more muted colors.

Do you think the sound of the album will be disco vibes?

I go back and forth on it, only because on some of her albums, the aesthetic doesn't necessarily align with the sound. I think of 1989 because she so easily could have done a late ‘80s, ‘90s type of aesthetic. I see so many edits online of what 1989, the cover, could have been, and it's always ‘80s themed, and she didn't do that. She was in her preppy matching two-pieces, high heels, walking around New York.

I do have this feeling that [Midnights] is going to be some form of pop-disco inspired. But she also said that it's touching on all of her past eras, so I can't help but think that maybe country and folk elements will be sprinkled throughout but I'm not sure how that would go.

What do you make of the song titles that have been revealed so far? I know a lot of people were excited about “Karma” being one of them. My colleagues and I have been predicting that Midnights is going to be Reputation part two.

I agree with this entirely because I think Reputation is her most vulnerable album and it's hidden behind this hard exterior. I talked about that before with the Tumblr grunge aesthetic, and I think she's doing the same thing here. She's going out looking glitz and glam and then she goes back into the Midnight's actual promotional pictures and she looks solemn, she looks lonely, she looks worried.

What I noticed is we have a lot of song titles that are reminiscent of Marvel; think superheroes, super villains. We have “Anti-Hero,” “Karma,” “Mastermind,” “Vigilante Shit.” They all fall under this umbrella of could-be in the MCU. If you look at the way Taylor Swift often describes love in her albums, it's almost like a movie. She ends Folklore with the song “Hoax,” where she says, "The hero died, so what's the movie for?" And then in “My Tears Ricochet,” she says, "You're the hero flying around saving face."

I think that she is probably pulling a lot from those ideas of characters in movies and especially in superhero movies, that are morally ambiguous. I think Taylor Swift is quite the morally ambiguous character within the framework of celebrity. She's very polarizing to people. I think this album may be her coming to terms with how people view her because I think in Reputation, she did play with that but it was very tongue-in-cheek. I think life and the drama surrounding her has become so much more complicated since Folklore and Evermore released and the re-recordings, that she is probably having to look in the mirror of how people view her now and how she views herself.

That's interesting — I feel like Taylor has gotten to the point where she doesn't care to address that anymore. Folklore and Evermore were her first albums in a long time where she was writing stories that weren't her own. Do you think that Midnights will be a return to her writing about her own life?

I think it'll be stories about her own life through the lens of other stories, if that makes sense. I think that is what Folklore and Evermore are. Not to use “My Tears Ricochet” as an example again, but it's a thinly veiled metaphor of a toxic or crumbling, broken up relationship that's really about other things in her life that don't have to do with the relationship. She doesn't want people to know exactly, biographically what she's going through but she still wants to communicate how she feels and I guess, the struggles that she faces. She talked about “Anti-Hero” in that little Instagram reel, like, "This is my most vulnerable song. This is my most real song. It's a tour through all of the issues in my life." I do feel like she cares about what people think about her but I think now she wouldn't be so open about giving people fodder to talk about, I guess.

Out of all the song titles so far, do you have one that intrigues you the most, or that you're most looking forward to hearing?

Well, “Anti-Hero” is a really cool name because knowing Taylor's use of referencing movies in her music is really interesting. And so to take what she usually uses as black and white, good and bad, and be like, "Maybe I'm the anti-hero, maybe I'm the hero and the villain in my own life,” hich I think a lot of us feel, that's really intriguing to me.

But honestly, the one that I'm most excited for is “Maroon,” just because I think there's so much you could do with it. I actually wrote a little poem based on the word maroon because I was just so inspired by the idea of what you could do with that. In Folklore and Evermore, she uses so many ship metaphors that it could be about being marooned: on an island, being abandoned. It could be about red things drying, like wine or blood. It's so evocative to me and I'm excited to see what she could possibly be referencing with the word maroon, or if she's going to do it in multiple ways because I feel like she totally could.