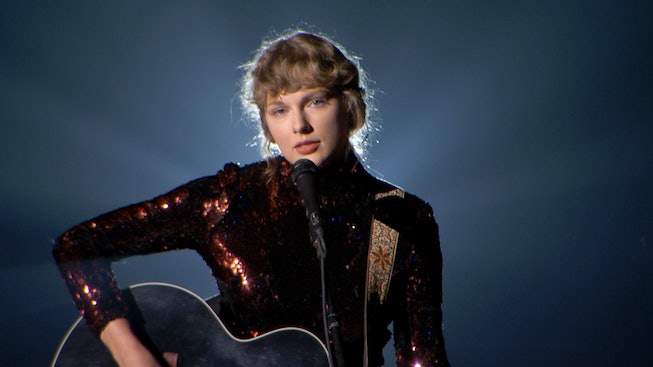 One of the weirder aspects of the pandemic has been watching the awards show industrial complex soldier on in spite of social distancing mandates. You can almost feel the tiniest bit of levity if you let yourself laugh at how bizarre live shows have become. Case in point: Taylor Swift singing her heart out to "betty" to a completely empty audience at the 2020 Academy of Country Music Awards.

The folklore track is a return to Swift's country origins, and she played it up during her performance with just a guitar and support from a single harmonica. Along with it being the live debut of the song, Swift included a minor lyric change. In lieu of, "Would you tell me to go fuck myself?" she swapped it with the FCC-appropriate, "Would you tell me to go straight to hell?" Swift obviously smirked while she sang the line.

The song is technically from the perspective of James, a 17-year-old boy doing his best to win back his love Betty after wronging her, but some Swift fans have interpreted the song as a queer anthem. Swift has referred to James with male pronouns in interviews, but in the end the message of the track stays the same.

“I think we all have these situations in our lives where we learn to really, really give a heartfelt apology for the first time," she said in a country radio interview in August. "Everybody makes mistakes, everybody really messes up sometimes … I've always loved that in music you can kinda slip into different identities and you can sing from other people's perspectives. So that's what I did on this one.”

Watching Swift felt like a flashback to her Speak Now era and a welcome reprieve from the now. Catch the performance below.