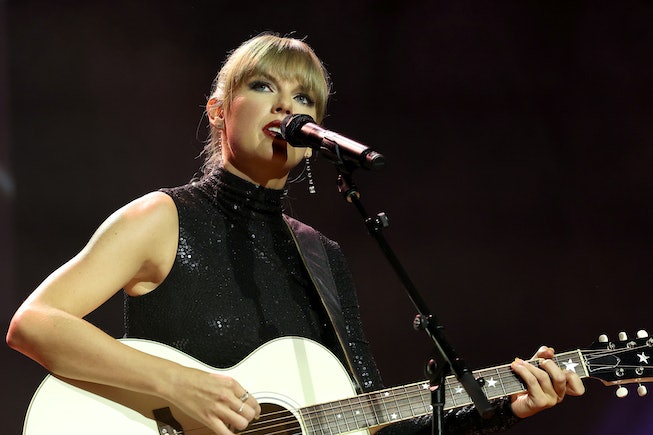 For superstars, we imagine that getting to perform the Super Bowl halftime show is like winning the lottery. From J.Lo to Lady Gaga and The Weeknd, only the world’s biggest legacy and veteran music acts ever get the chance to play the coveted performance slot’s stage. One name that’s noticeably absent from the Super Bowl’s past list of performers is Taylor Swift, who’s surprisingly never played a halftime show throughout the entirety of her career. However, that could soon be changing — according to some fans and media outlets online, the “Fearless” singer may very well be the next super star to take over the Big Game.

The speculation began Friday morning, shortly after the NFL announced at midnight on Thursday that after ten years Apple Music will be replacing Pepsi as the official sponsor for the Super Bowl halftime show. Though it initially seemed like a pretty innocuous piece of news, people on Twitter soon began to theorize that the announcement actually included secret hints that point to Swift as the halftime performer for the 2023 Super Bowl.

Per TMZ, USA Today, Variety other outlets, the first clue was the time at which the NFL decided to make the announcement: at midnight on Thursday. Those following Swift will know that the musician has a new album titled Midnights arriving on Oct. 21, and has been releasing a lot of information about the upcoming record at midnight. Although the NFL’s announcement made no mention of Swift, some industry insiders believe the timing was an indication to the superstar.

If you ask us, this interpretation is a bit of a stretch — at this point, midnight has become a standard time for all musicians to release new songs, albums, make announcements, etc., but we digress. But there are more compelling reasons.

The Super Bowl’s change of sponsors presents a stronger case for Swift being the next halftime show performer; in previous years, it turns out that Swift was reportedly contractually unable to perform at the Super Bowl halftime show due to being locked in a contract with Diet Coke and Coca Cola, Pepsi’s number one competitor. Now, with Pepsi out of the picture, it seems natural that Swift’s path to the Super Bowl halftime show can finally go forward unimpeded. (However, there are still a few holes with this logic, too; Swift’s contract with Diet Coke seemingly ended in 2018, which means she should’ve been free to perform at the Super Bowl halftime years ago. Additionally, Swift’s relationship with Apple Music hasn’t exactly been peachy clean either; who can forget when the songwriter penned a stern, paragraphs-long open letter to the streaming service in 2015 demanding them to do better by songwriters and artists).

Finally, Variety has presented the strongest case for the possibility of Swift taking the Super Bowl stage: three sources familiar with the situation have reportedly confirmed to the entertainment magazine that it is actually happening.

At the end of the day, the next Super Bowl halftime performer truly could be anyone, including Swift. While we won’t believe it until we see the official announcement, we’ll be keeping our fingers-crossed for a Folklore-Evermore-Reputation medley, too.