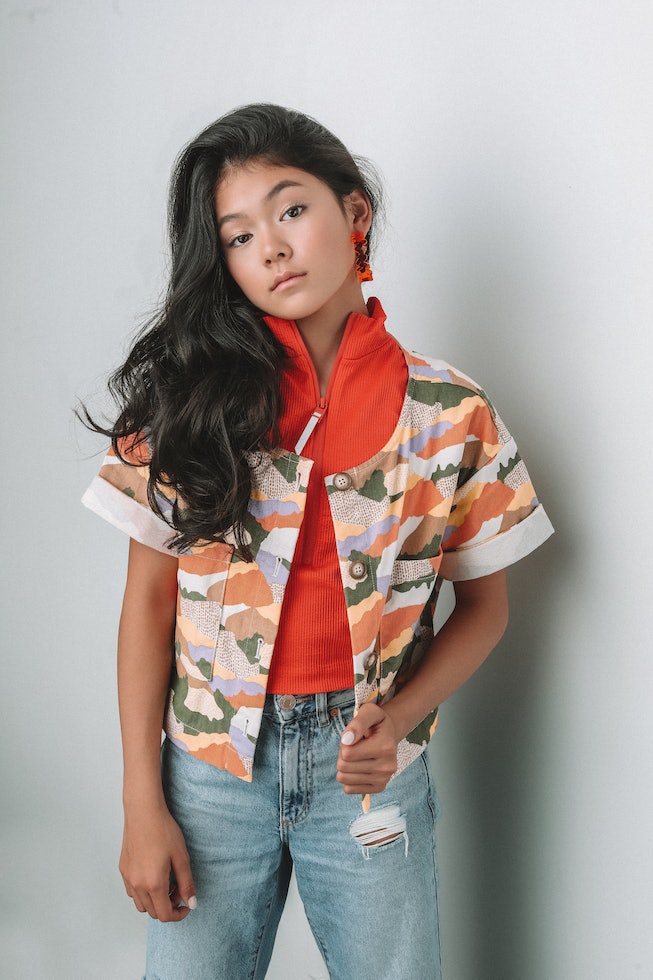 A summer vacation spent in quarantine is tough for any teen. Now imagine being a teen stuck inside while your first major project is released in the world. Such is the case for 13-year-old Momona Tamada, who stars as Claudia Kishi in Netflix's modern-day retelling of The Baby-Sitters Club. "It's been difficult," Tamada says from her home in Vancouver where she's been quarantining. "I've been trying to keep myself busy, but it's very different for sure." Still, Tamada is keeping high spirits, thanks in large part to the show's overwhelmingly positive reaction, with her take on the beloved fashion-loving Claudia as a particular standout. "Because I'm so similar to Claudia, I think I unknowingly added my personality into it," she shares.

Here, the burgeoning star talks about modernizing the role, the cast's group chat, and what she knows about season two.

How old were you when you first started acting?

I was eleven, so I actually haven’t been acting for too long. I started with dancing auditions, and shortly after that, because I was signed to an agency, they started sending me to acting auditions. It really quickly launched and I started booking jobs, which was crazy.

Do you remember your first audition?

Okay, so, my first audition story was very interesting. It was a commercial and I had a few lines, but I didn’t know I had lines. I walked in and they said, 'Are you ready to start?' So I slated, which is where you say your name, and then they started reading lines to me. I just stood there. It was definitely an experience I will never, ever forget.

How did you first hear of The Baby-Sitters Club?

I first started reading the books in elementary school. My teacher introduced them to me. It's funny, I got a text from a friend the other day saying, 'I remember you reading them at lunch!'

Did you have a favorite book of the series?

There are so many books, but one of my favorites — this is so basic — is 'Kristy's Great Idea' because that was the beginning of the legacy and the franchise.

Have you read all the other spinoff series?

I've been tracking down as many as I can find. I have the Little Sister books and the mystery books. I'm on the hunt to find Dawn's California spinoff.

How did you hear about the show?

I got an e-mail and I was super excited to hear they were doing a reboot. I sent in a video audition, and then a callback on Skype. Shortly after that, I flew to L.A. to do a chemistry reading with some of the other girls. And all of the girls who got cast, we had an immediate connection. We became friends so fast. I met Sophie [Grace, who plays Kristy] in the lobby of the hotel. I was like, 'Are you auditioning for The Baby-Sitters Club?' We ran lines together.

How did you find out that you got the role of Claudia?

They told us in the room. They told us that they messed up our tapes or something, so we went back in and they said, 'We have one more thing to tell you guys: You're the cast of The Baby-Sitters Club.' I think we all froze for a second. This was May and we started filming in mid-July, but the second we found out we were cast, we exchanged numbers and made a group chat. We messaged each other every single day. One day I was working on another project in-between and put my phone down for the day, and when I checked it Iater, I had like 1,000 messages from the group chat.

Is the chat still active?

Yes! We are always talking. Once a day at least.

What did you guys bond over before getting to set?

A way that we clicked a lot is that we're passionate about acting and similar things. It wasn't hard to make conversation. We really found a lot in common. [And] we shot in Vancouver, so me and Malia [Baker, who plays Mary-Anne], because we are from Vancouver, got to show the girls around. We spent all of our time together. We would work five days a week and then on the weekends we'd most likely be hanging out with each other at the mall or the movies.

Who is most similar to their character in real life?

Oh man, that's a hard question. I would have to say all of us. We are all so similar to our characters, it's crazy. We would be running lines with each other and be like, 'Wow, this is something that you’d totally say.'

What changes did you make to your Claudia from the one in the books to make it more relevant for today?

Because I'm so similar to Claudia, I think I unknowingly added my personality into it. Of course the writing has changed to be more modern, but there is still the nostalgic aspect.

Let's talk about her clothes — what were some of your favorite pieces to wear?

Of course the iconic mustard yellow jumper with five-inch platform shoes. That was one of the first outfits I tried on and I absolutely loved it. There was this one outfit with a really cute pink sweater and these splatter-painted overalls. I love custom clothes and things that are one-of-a-kind. There are no other pair of overalls like that in the world.

Did you get to keep anything?

I did actually! In the wardrobe department there was this room with all the clothes, and we all went and picked stuff from each other's wardrobes.

You get to wear some great plaid pants that are a nod to your co-star Alicia Silverstone's Clueless character — had you seen Clueless before?

I did. I absolutely love Clueless. It's so iconic and I love all the fashion in it. Working with Alicia Silverstone was a huge dream come true.

What were your favorite scenes to shoot?

Anytime I'm with the girls and in Claudia's room, I felt like I was hanging out with my best friends. And a lot of episode six, because that was a very big episode for Claudia. I had to prepare myself a little bit more for that episode because there was so much emotion, but that was one of my favorite episodes to shoot.

What has it been like to see how much everyone is loving the show now that it's out?

It's so cool to see all the positive impact the show is making. It's a little different because we can't see each other and watch together, which is hard. But to see positive reviews and how the audience is connecting to the characters all over again is so cool to see. I got this e-mail from this boy who had experienced so many similar things to Claudia and how he felt like he was heard and had something to relate to. It was this super magical warm feeling.

Have you heard anything about season two?

I haven't, but I have my fingers and my toes crossed. I think we all do.

What would you like to see happen to Claudia next?

It's up to the writers, but I'm just super excited to hopefully have more seasons and see her character grow so that people can grow up with Claudia all over again.

NEXT UP
Culture
Phoebe Dynevor Will Not Return for Bridgerton Season 3
A Night Out
A Night Out With Rachel Bilson
Culture
Netflix Is Seriously Cracking Down On Sharing Passwords
Culture
6 Shows To Binge Once You've Finished 'The White Lotus'
Style + Culture, delivered straight to your inbox.