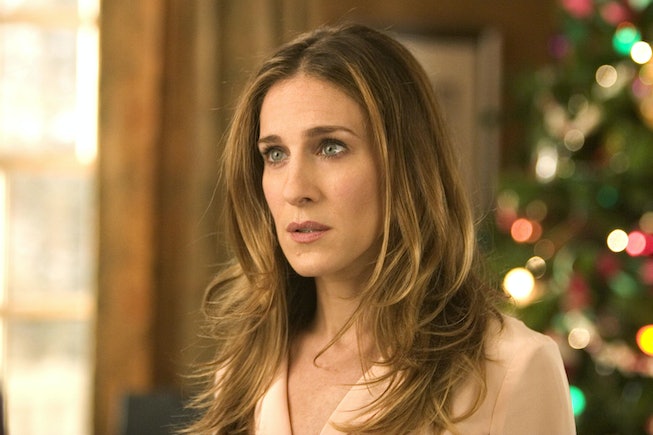 Family holiday films are a dime a dozen. From Love Actually to Home Alone, Christmas With the Kranks to the recently released Happiest Season, family-oriented holiday fare has never been easier to come by — whether you like funny, lighthearted rom-coms or serious, thought-provoking dramas. But with each passing year, I’ve come to realize one important thing: I only ever really want to watch The Family Stone. In fact, I can say, in no uncertain terms, without an ounce of hesitation, The Family Stone is the pinnacle of Christmas cinema. And there’s never been a better time to explain why than today, its official 15 year anniversary.

I knew I’d love The Family Stone from its very first scene. Power-walking through a busy department store, Meredith (Sarah Jessica Parker, fresh off her multi-Golden Globe-winning stint on Sex and the City) answers a call from someone we presume to be her assistant and immediately informs them that there will be no days off in her line of work. “I don’t care if it’s the Friday before Christmas,” she exclaims, showing no hint of remorse. “She’ll have Monday off!”

It’s the perfect setup. A high-strung, big city career woman, Meredith is immediately positioned as the polar opposite of everyone in the titular Stone family — save for maybe Everett (Dermot Mulroney), the boyfriend that decides to bring her home for the holidays. While Everett seems genuinely excited for his family to meet the woman he plans to marry, it soon becomes clear that Meredith’s elite and worldly sense of propriety is at painful odds with the Stones’ more easygoing approach to life.

Within minutes of arriving at the Stone compound, Meredith has already been shamed for initiating a handshake rather than extending a hug and mocked over her refusal to share a bed with Everett in his childhood room. Most offended by Meredith’s general presence is Amy (Rachel McAdams), Everett’s sister, who had the unfortunate experience of going to dinner with the couple several months prior, where she was traumatized by Meredith’s “incredibly grotesque throat-clearing tic.” The tension between these two — as well as between Meredith and just about every other member of the family — drives the plot. But what makes The Family Stone so special is not its depiction of a girlfriend’s futile efforts to make her boyfriend’s family like her despite being the physical embodiment of everything they hate. No. The Family Stone’s true power lies in its depiction of a family that truly loves and cares for one another.

Most family holiday films revolve around dysfunctional familial units, focusing on strained relationships between parents and their children or sibling rivalries that never outgrew puberty. But in The Family Stone, director Thomas Bezucha offers an alternative: a fully-functioning, undeniably loving family whose sense of enviable normalcy is upended by the arrival of someone new. Not to say the Stones aren’t different — with five children, it’s almost impossible that they’d all turn out to be carbon-copies of one another — but their differences aren’t a source of conflict either. After all, this is the kind of family where the matriarch, Sybil (an incomparable Diane Keaton), can lovingly joke about her burnout son Ben’s (Luke Wilson) pot habit seconds after seriously telling him that smoking won’t be allowed inside the house this holiday season. Despite their dissimilarities, it’s apparent, at almost every turn, that the Stones love each other unconditionally, and no matter what, will always be there for each other.

Nowhere is this dynamic more prominent than in my favorite scene from the film: a Christmas Eve dinner, where a simple conversation about adoption turns into a much more complicated one about the viability of gay men as parents — and later, into a heated debate about whether parents should want gay children. The universal opinion of the forward-thinking Stones’ is that LGBTQ+ people should have access to everything straight people do; when Thad, the deaf, gay member of the Stone clan (played by actual deaf actor Tyrone Giordano), talks about finally being approved to adopt with his supportive partner, Patrick (Brian White), it’s obvious that his family couldn’t be more excited. Meredith, on the other hand, has some concerns. “Do you boys believe in nature versus nurture?” she inquires unironically. When they express confusion at her line of questioning, she wastes no time following up, “Well, I just mean...the gay thing.”

What follows is one of the most fascinating trainwrecks in cinematic history. As Meredith struggles to not offend with her clearly insulting words, implying that being gay is some sort of handicap before ill-advisedly comparing it to what Patrick must also feel as a Black man, the Stones all look on in horror, utterly flabbergasted at the gall it must take to say these things at what was intended to be a good-natured family dinner. Even Everett is forced to come to his brother’s defense, the first time during the trip that he didn’t automatically side with his difficult girlfriend.

By the time Meredith utters the unforgivable statement, “I just think any parent would want a normal child,” both Sybil and her husband Kelly (Craig T. Nelson) had reached their breaking points, simultaneously raising their voices to tell Meredith they had heard absolutely enough of her homophobic tirade. But it’s the next moment, when Sybil steps in to comfort her son, that resonates: “Hey, you,” she beckons while throwing a fork in Thad’s general direction to get his attention. “I love you, and you are more normal than any other asshole sitting at this table.” I remember watching this movie over a decade ago with my own mother, years before I would ever muster up the courage to come out to her (or anyone else), and wondering whether I’d be able to count on my own mom to defend me like that. (I later found out that, thankfully, I can.)

It’s emotional moments like these that show The Family Stone’s heart — remember when Meredith surprises everyone with portraits of a pregnant Sybil? — but the 2005 film would be nothing without its silly beats too. Even the more risqué jokes go off without a hitch: when Meredith speaks exaggeratedly loud to Thad because he’s deaf, the joke is on her, not him. And in one of the most deliberately cringe-worthy scenes, Meredith tries to get everyone to guess the fourth word of her clue during a game of Charades. “I can’t believe you’re pointing at him,” Amy eventually chimes in, as Meredith's finger ominously hangs in the air, aimed in Patrick’s general direction. Before long, it’s revealed that her clue was The Bride Wore Black; Patrick was the only Black person in the room. It’s a clever pun about race that doesn’t feel racist, offering solid proof that jokes can be made about controversial topics in ways that don’t offend. That the audience can never know for sure if Meredith was deliberately pointing at Patrick or had simply been caught in a rather unfortunate moment is one of the film’s greatest mysteries.

This deft blend of screwball comedy and heartfelt schmaltz makes The Family Stone an enduring holiday classic that only gets better with time. (I often wonder whether the critics who gave it middling reviews in 2005 have changed their tunes in the decade and a half since.) Smart, funny, and surprisingly sincere, it’s the cinematic equivalent of comfort food — it goes down like a warm glass of spiked eggnog. And as the film approaches its grand finale, with our two main love interests falling for each other’s siblings — Meredith lands with Ben, whose nonchalance proves to be the perfect complement for her anxiety-proneness, while Everett ends up with Julie (Claire Danes), Meredith’s much more agreeable sister — it’s miraculous how much one finds themselves rooting for these abnormal unions. The Family Stone’s refusal to bend to genre conventions forces viewers to reconsider everything we’ve been taught to expect from this genre. Just like its antiheroine, The Family Stone is a resilient piece of complicated and contradictory truths, determined to make you fall in love with it when you least expect it.

The Family Stone is available to stream on HBO Max.