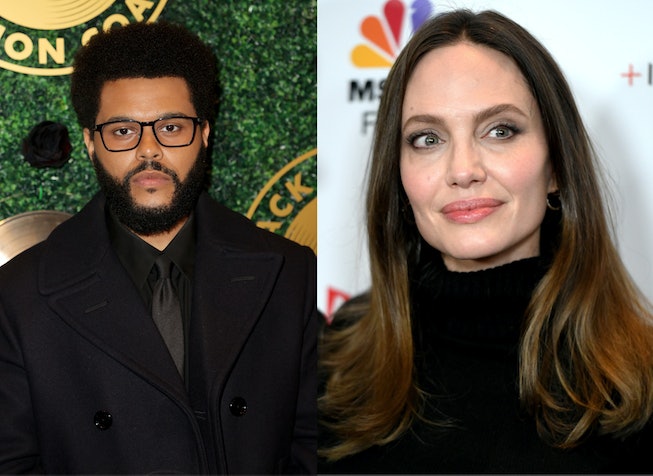 The Weeknd’s new album Dawn FM was released on January 7 to a league of eager fans. Since then, listeners have picked the record apart from top to bottom, fully immersing themselves in his psyche and unpacking hidden messages along the way. One song in particular has caused quite a stir. The love-sick track “Here We Go...Again” featuring Tyler, the Creator explores the beginning of a relationship that wasn’t meant to happen.

Many are wondering who the singer could be singing about, although some claim the answer is clear. Rumors of The Weeknd and Angelina Jolie being a suspected couple have been flying around since 2021, when the two were first publicly sighted together at Italian restaurant Giorgio Baldi in Los Angeles on June 30. Despite sources at the time saying the meeting was strictly “business,” the dreamy lyrics in “Here We Go Again,” perhaps are suggesting otherwise.

The song opens with a nostalgic recollection of his accomplishments. “Strike a pose with my kinfolk/ Front page of the billboards/ Suit and ties and cigar smokes/ Macallan shots ‘til it burn throats/ We still celebratin’ Super Bowl.” He’s at the height of his career and thriving, it seems, before meeting someone new.

“Said you wanted your boyfriend jealous with a couple pics,” he continues. In September 2021, The Weeknd and Jolie were spotted together on a dinner date, again, at Giorgio Baldi. Though the duo arrived separately they didn’t shy away from cameras on the way out — a suspicious move for two click-bait worthy celebrities.

Later on the track, The Weeknd outlines the start of his mystery relationship. “Your girlfriend’s tryna pair you with somebody more famous,” he sings. “But instead you ended up with someone so basic, faceless/ Someone to take your pictures and frame it.”

Jolie’s dating history includes wildly famous men. From her very public relationship with Billy Bob Thornton, to her marriage to Johnny Miller, and then Brad Pitt (with whom she shares six children), each man seemed to be more noteworthy than the last. Meanwhile, throughout his career, The Weeknd has played around with hidden, or “faceless,” identities. His first few singles and following mixtapes were released anonymously online. Then, after his career took off, he found new ways to explore ambiguity.

In the music video for “Save Your Tears” — from the 2020 album After Hours — the singer appeared on screen with a freshly sculpted face, and completed the look with plastic surgery stitches. Later, at the 2021 American Music Awards red-carpet, The Weeknd arrived wearing a red tuxedo and a face-full of bandages. Meanwhile, for the Dawn FM album cover he digitally modified his face to look decades older.

The next verse of “Here We Go...Again,” proves to be particularly telling. In it he sings, “My new girl, she is a movie star.” Jolie is, of course, an iconic actress. Could she be the woman he’s falling for? It does seem possible, and if true, their relationship is making The Weeknd very happy.

Neither The Weeknd nor Jolie have commented on the rumors just yet. In the meantime, you can stream Dawn FM now, and read NYLON’s review of the album.