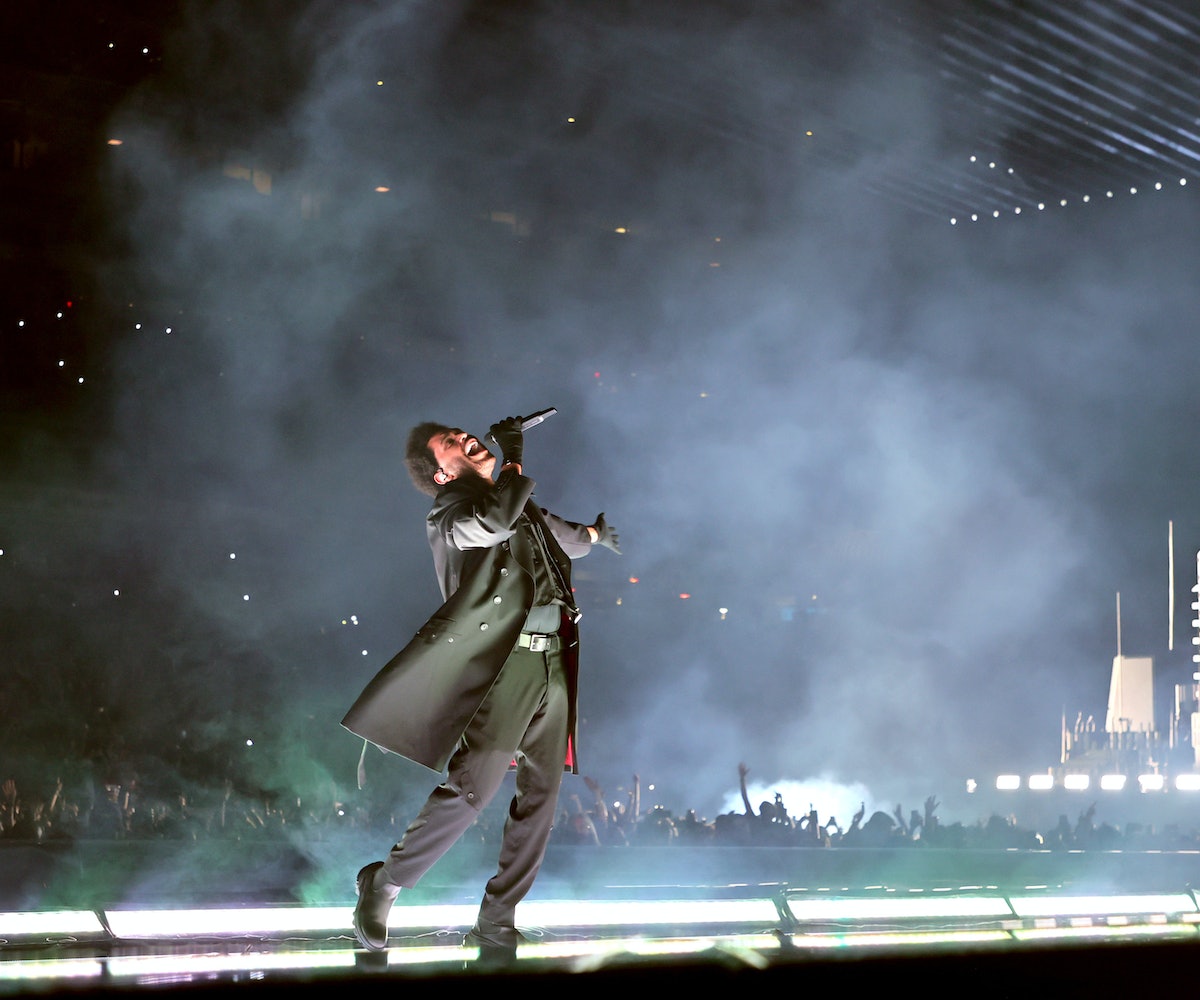 The Weeknd arrived at New Jersey’s Met Life Arena with something to prove. After rescheduling his After Hours tour — not once, but three times — the singer walked into a stadium full of eager fans Saturday evening. I could feel the crowd buzz with nervous energy. Would the concert be worth its over two-year delay? Some attendees had just secured tickets, while others had been waiting to see the show since After Hours dropped in 2020. It was a mixed bag of anticipation and I was somewhere in the middle — excited to hear The Weeknd belt his moody tracks and skeptical about the production of it all. What exactly were we waiting for?

Before I could ask my friend for her opinion, the lights cut out and the room erupted in cheers. Suddenly, a skyline-themed set emerged behind the cloud of fog where the empty stage used to be. For the next two hours, the football stadium that was home to the New York Jets and Giants became The Weeknd’s domain. It was quite literally a city of its own – home to over 82 thousand guests and complete with realistically designed skyscrapers, buildings, flickering lights, surprise fireball cannons, a simulated sunrise, and a gigantic floating moon. This was the universe The Weeknd had been singing about and from for the last two years.

Moments later, The Weeknd appeared in the middle of it all wearing a black outfit and gas mask. He began the show with “Alone Again,” the first track on After Hours, and breezed through the melodies with ease. His performance was a non-stop display of creativity from that point on. A crew of dancers in long red cloaks moved in sync across the stage, while a never-ending light show beamed throughout the crowd. As for the singer, he seemed hell-bent on delivering an entertaining show.

In 2021 when he announced the modified tour schedule on Instagram, he said, “The tour dates are moving and will commence in the summer of 2022. Due to constraints of arenas and the demand for more shows I want to do something bigger and special for you which requires special stadiums.”

This was the universe The Weeknd had been singing about and from for the last two years.

Whatever “constraints” he referred to must have been sorted out because the After Hours Til Dawn Tour never skipped a beat. All of the singer’s hits were accounted for and had a distinct creative vision brought to life through lighting cues. When his debut single “Wicked Games” began, the arena was washed over in a deep blue hue that perfectly matched the song's melancholy lyrics. The opening synth of, “I Can’t Feel My Face,” brought a bright white light with it, allowing attendees to see each other jump and dance along to the party anthem. As the night carried on, The Weeknd went right along with it. Without stopping for more than a quick sip of water, he sang 20 songs in total — ranging from the tour’s title records, Dawn FM and After Hours, to his hits from Trilogy, Beauty Behind the Madness, and Starboy.

He also wasn’t afraid to lean into his sex appeal. As the opening hiss of “The Hills” echoed through the speakers, the entire arena was stained by a sultry red light. Clad in just a muscle tank and trousers, he sang, “I’m just trying to get you out the friend zone.” The crowd yelled back, “‘Cause you look even better than the photos.” When the chorus hit, fireballs exploded across the stage. At one point, my friend squealed, “I think this is the best thing I’ve ever seen.” “Honestly,” I yelled back, “same.”

For what it’s worth, The After Hours Til Dawn tour delivers on its promise. It’s as big as it is special, but in many moments it lacked intimacy. Perhaps that’s the trade-off when booking a stadium show instead of a smaller venue. Aside from the obligatory, “This is the best night,” or something of that nature, he rarely paused to engage with the crowd or explain the meanings behind his songs. Toward the end of his set, he belted “Call Out My Name,” rumored to be written about his ex Selena Gomez. The crowd whispered amongst themselves, but he went right into his next song without further explanation.

What the show lacked in intimacy, it made up for through The Weeknd’s sheer, effortful execution. Even his older tracks like 2011’s “The Mourning,” and 2016’s “Die For You” felt fresh amid the pure spectacle of the stage. Fans who’ve followed the star since 2009 — when he was an anonymous artist on YouTube — gleefully screamed along as the show weaved through his expansive music catalog. For fans of the artist who’ve waited years to hear their favorite song live, The After Hours Til Dawn tour is certainly worth the wait.

Though the show was undoubtedly fun to watch, The Weeknd seemed too focused on its execution to relish in its beauty. When the closing track “Blinding Lights,” faded out, he left as swiftly as he arrived, taking the pop-up city with him. Despite the crowds' demands for an encore he never returned to the stage. Even so, people lingered behind waiting and wishing for just “one more song,” which never came. When the crew finally cut the lights on, we were transported back to reality — perhaps disappointed to see the concert end, but thrilled to have experienced it at all.

The After Hours Til Dawn Tour Setlist: