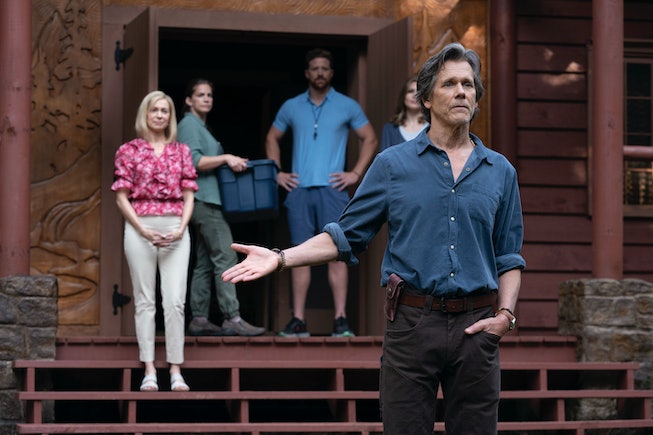 In a genius stroke of title selection, Peacock has announced They/Them, a new horror film about the terrors of conversion therapy, starring Kevin Bacon.

The slasher film (They Slash Them, if you will) is headed to Peacock at the end of the summer on August 5th, just in time to terrorize us all with its seemingly campy take on the evils of conversion therapy camps.

Bacon stars as Owen Whistler, the director of a week-long program intended to “help them find a new sense of freedom,” or really, to “turn” LGBTQ+ teenagers straight and cisgender. Per a description, “As the camp’s methods become increasingly more psychologically unsettling, the campers must work together to protect themselves. When a mysterious killer starts claiming victims, things get even more dangerous.”

The first teaser for the film, released on Wednesday, June 22nd, starts with Bacon ominously telling his campers, “This is a safe space,” as they share sidelong glances at each other. Images are then spliced with slashes across the screen in a nod to the title, as scenes of campers expressing themselves as queer youth are interlaced with more sinister images of the adults leading the camp, creepy dolls hanging from the ceiling and finally, a look at the creepy slasher themself.

​​​“They/Them has been germinating within me my whole life. I've loved horror movies as long as I can remember, I think because monsters represent 'the other' and as gay kid I felt a powerful sense of kinship with those characters who were different, outlawed, or forbidden,” said writer and director, John Logan. “I wanted to make a movie that celebrates queerness, with characters that I never saw when I was growing up. When people walk away from the movie, I hope they're going to remember the incredible love that these kids have for each other and how that love needs to be protected and celebrated.”

Currently, 20 states in the United States have bans prohibiting conversion therapy for minors, 8 have partial or preliminary bans, and 22 have no laws or policy against the practice.

Watch the first trailer for They/Them below: