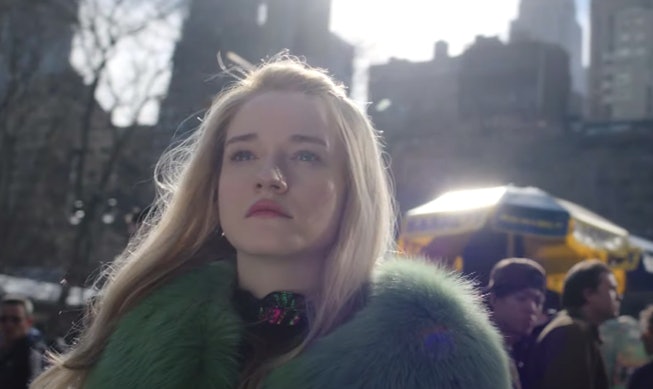 Shonda Rhimes is adding a new and exciting tale to the Shondaland Universe. The expert writer and showrunner created a series based on the scandalous life of Anna Sorkin, otherwise known as Anna Delvey.

For the uninitiated, she’s the con-woman who made national news in 2018 for pretending to be a German heiress and swindling New York socialites out of thousands of dollars to build her own empire, before being sent to Rikers for her crimes. Perhaps you recall her expensive courtroom outfits, black-rimmed glasses and matching choker, or her entirely unbothered attitude, all of which were heavily documented for the world to see.

Despite the severity of her crimes, Sorkin’s case quickly captured the media’s attention. Everyone wondered who she was and how she managed to steal so much money — $275,000 to be exact. We’ll soon be able to watch her story unfold in Rhimes’ Netflix series, Inventing Anna, with Emmy award-winner Julia Garner starring in the titular role.

Keep reading for everything we know about the Inventing Anna so far.

The first Inventing Anna trailer asks, “Who the hell is Anna Delvey?”

The first official trailer for Inventing Anna, released on Friday, January 14, quickly gets to the heart of the series. Anna Chlumsky plays Vivian, a stand in for the New York Magazine reporter (Jessica Pressler) who broke the first Anna Delvey story, as she starts to piece together the scammer’s tale. Visiting Delvey (Garner) on Riker’s Island, Delvey tells Vivian she “looks poor,” and later screams that “Anna Delvey is a masterpiece, bitches!”

Inventing Anna is based on reporting from The Cut.

Shonda Rhimes was inspired to tell Sorkin’s story after reading The Cut’s article “How Anna Delvey Tricked New York.” The piece, written by Jessica Pressler (who also wrote the article that went onto inspire Hustlers), went viral for its in-depth reporting of the allusive grifter.

The true-crime show follows a journalist named Vivian (played by Anna Chlumsky) who is tasked with interviewing and investigating Sorkin. Though she’s meant to unbiasedly report on the court-case, the two develop a love-hate relationship as Vivian uncovers who she really is.

According to the log-line, the series asks: “Is Anna New York’s biggest con woman or is she simply the new portrait of the American Dream?”

A rolodex of well-known actors joined Garner and Chlumsky to round out the cast. Katie Lowes (Scandal) is playing Rachel, a friend of Anna’s who's tricked into paying a $60,000 bill for a trip to Marrakech. Her character is inspired by a former Vanity Fair employee who was mentioned in The Cut article. Alexis Floyd (The Bold Type) also makes an appearance as a hotel employee named Neff whom Sorkin befriended. Meanwhile, Arian Moayed (Succession) portrays Sorkin’s defense lawyer, and comedian Anders Holm (The Mindy Project) stars as Vivian’s husband Jack.

Actress and model Lavern Cox is on board as well, playing a celebrity fitness trainer named Kacy Duke. Cox recently spoke with Entertainment Tonight about the role and said, “Being in Shondaland has been a dream come true. I’m such a huge fan of [Shonda’s] work, everything she’s about, and everything she stands for.”

Julia Garner is a dead ringer for Delvey in the show’s first photos.

On October 25th, Netflix released its first look photos of Garner as Sorkin/Delvey, and resemblance is uncanny. See how the actress transformed into her character below:

Reporting from Entertainment Tonight revealed that Inventing Anna has been in the works for a while now. The cast was filming around the city last spring, which Cox called a “glorious” experience.

Variety reports that Inventing Anna will premiere on the streaming platform in February.