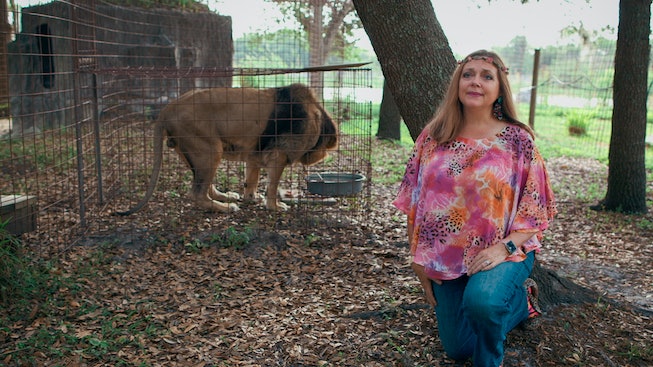 The first edition of Tiger King coincided with the beginning of the COVID-19 lockdown. As we collectively settled into our new lives as forced shut-ins, the completely deranged story of a rivalry between a flashy fame-hungry gay man and a possibly murderous big cat activist proved the perfect salve. Filled with twists and turns so crazy they bordered on unbelievable, it became all anyone could talk about for weeks. To call it a “hit” is an understatement.

Now, over a year and a half after audiences first got to know Joe Exotic and Carole Baskin through Netflix’s eyes, the streaming service is gearing up to release a second season of the breakout docuseries. The upcoming five-episode installment has been described as a “colorful saga” that will dive into the “sudden fame and unwanted attention from the authorities” that followed Tiger King’s colorful cast of characters after the release of the first season.

According to a press synopsis, this sequel will continue the “twisted course” of season one as “newfound revelations emerge on the motivations, backstories, and secrets of America’s most notorious big cat owners.” And if news that season two would mark the returns of “old enemies and frenemies” like Jeff Lowe, Tim Stark, Allen Glover, and James Garretson didn’t have you chomping at the bit for its imminent release, today’s official trailer release certainly will.

Promising viewers that we “haven’t quite seen it all” yet, the Tiger King 2 trailer opens with a prepaid phone call from Joe Exotic, dialing in from prison. “There’s an innocent man in prison,” he says, talking in the third person. “Everybody from the zoo is out there making money and I’m paying the price for every one of them people. If you give a damn, it’s time to speak up.” To complement his claims, we immediately flash over to said zookeepers, who proudly show off their expensive jewelry, palatial bedrooms, and squads of girls. “Tiger King changed our lives overnight,” one says. “We have more money than god right now.”

And things only get crazier from there. The rest of the trailer features Joe Exotic stans preaching his innocence, “Eastern European bitches” who think they can’t be wrong, men riding on jet skis, and deep discussions about Tim’s mounting paranoia that someone was going to come for his animals. Tiger King 2 appears to just be just as “batshit crazy” as its predecessor, also promising further investigation into the mysterious disappearance of Don Lewis. (Does Carole know something? Did it have to do with the “shady characters” he was dealing with in Costa Rica or the “dangerous stuff” he liked to play with?). Oh yeah, did I mention that Joe Exotic describes the “nature of the dispute” between him and Mr. Lowe as “very personal?”

“We’ve only scratched the surface,” the trailer warns. Well, time to strap in.

Check out the trailer below. Tiger King 2 premieres November 17 on Netflix.