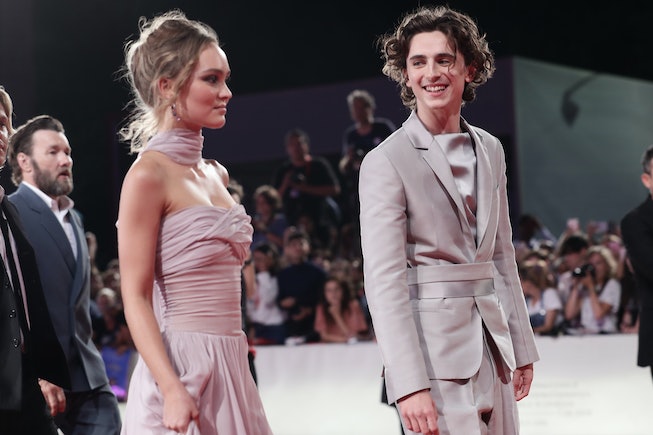 It seems like only yesterday that the internet collectively went into hysterics over the leaked pictures of Timothée Chalamet and Lily-Rose Depp locking lips — if that's what you want to call it — on a yacht in Italy. At the time, the pair (who quickly became paparazzi darlings thanks to their public dates at New York hotspots like Blue Ribbon Fried Chicken, MUD Coffee Shop, and Central Park) had been dating for at least a year. And as far as we were concerned, their relationship has been all roses (get it) since then. Unfortunately, it may be time to grab a box of tissues because recent reports confirm that the pair have parted ways.

The news comes from a May 2020 British Vogue feature, which found 24-year-old Chalamet in conversation with Dame Eileen Atkins, who he was set to star alongside in the play 4000 Miles at London's legendary The Old Vic Theater. Though Atkins was quoted as having "significantly less interest" in discussing Chalamet's dating life (which, in addition to Depp, also includes a fling with Madonna's daughter, Lourdes Ciccone Leon), reporter Olivia Marks did manage to find out that, right now, Chalamet was single.

The timeline of the former couple's relationship is somewhat rough, though it's commonly accepted that sparks started flying between the pair while filming together for Netflix's The King, which starred Chalamet as King Henry V and Depp as Catherine of Valois, his eventual queen. (The aforementioned yacht pictures were taken while the couple was in Italy promoting the film's premiere at last year's Venice Film Festival.)

Depending where you fall on the spectrum, news of the it-couple's breakup is either tragic or exciting. On one hand, it's upsetting to consider the possibility that we won't ever get any more meme-worthy makeout pictures taken on expensive yachts. On the other hand, it means the Oscar-nominated Chalamet, who will appear next in Wes Anderson's The French Dispatch before starring in Denis Villeneuve's Dune adaptation, and Depp, who will appear in the opioid thriller Dreamland (alongside Chalamet's Call Me By Your Name costar Armie Hammer, no less), are both back on the market. As of now, these two Hollywood A-Listers are single and ready to mingle, so that has to count for something!

NEXT UP
Entertainment
Beyoncé's 'Renaissance' Tour Is Reportedly Scheduled For Summer 2023
Entertainment
Getting Ready With Pale Waves For Their 2022 New York City Concert
Entertainment
YDE On Her EP, Lady Gaga & Making New Short Film 'Send Help’
Entertainment
Who Will Rihanna Bring To The Super Bowl?