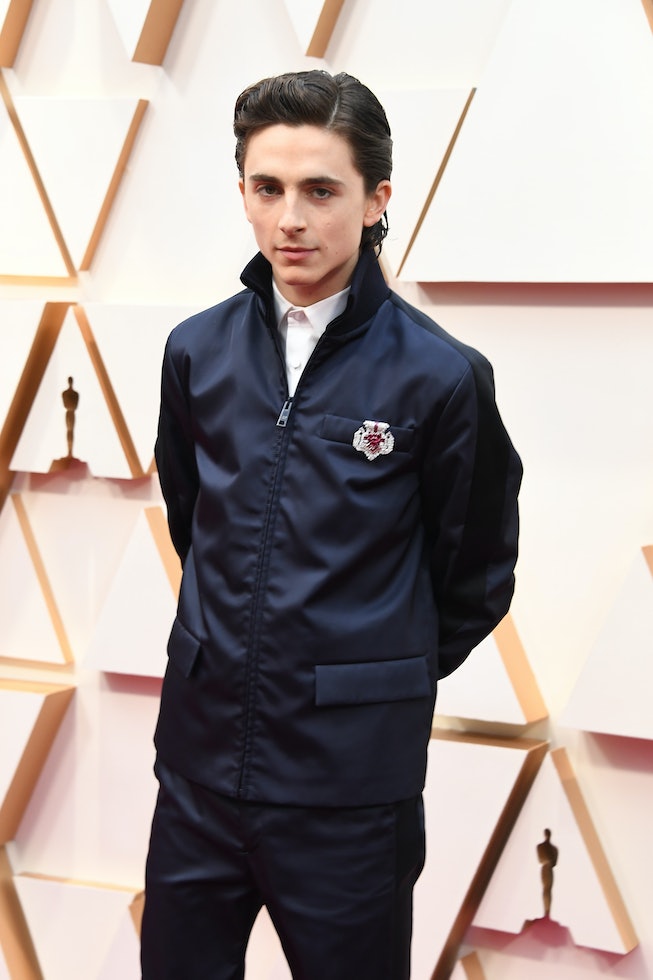 Hollywood's premiere heartthrob Timothée Chalamet is at one of those points in his career in which literally anything he does sends women young and old into screaming fits. Currently, my Twitter timeline is ablaze with a certain photo of from his recent GQ cover story shoot, one where he stands in the clearing of some serene as hell Woodstock, New York forest. His white tank top and slate corduroys may be saying "Come hither," but his baby pink Juicy Couture zip-up hoodie (his own!) are absolutely saying, "Mom? Can you drive us to Jamba Juice after the mall?"

It's the touch of unabashed femininity fans have come to adore from Chalamet. It's not even his first foray into teen girl-core looks — he rocked a Glossier hoodie in the brand's signature millennial pink shade while fanning out at the Uncut Gems pop-up in Manhattan last December.

Chalamet's Lady Bird and Little Women co-star Saoirse Ronan has taken note. "One of the things that we spoke about a lot when we were doing Little Women, in terms of our characters, but also in terms of myself and him as people, is that we both have this masculinity and femininity equally," she explained. "And I think that that's one of his strengths, is that he can be incredibly sort of feminine and sensitive and sensual, and also he's a guy that, you know, girls fancy."

Chalamet may be the object of many a person's affection, but that doesn't make him any less inclined to speak about his private romantic life. Chalamet famously dated Lily-Rose Depp after meeting during the filming of The King, and their relationship entered pop culture canon with a heavily memed photo of the two of them passionately — and unfortunately very awkwardly — making out on the deck of a boat of the coast of the Italian island of Capri.

“I went to bed that night thinking that was one of the best days of my life,” Chalamet recalled. “I was on this boat all day with someone I really loved, and closing my eyes, I was like, indisputably, ‘That was great.’ And then waking up to all these pictures, and feeling embarrassed, and looking like a real nob? All pale? And then people are like: This is a P.R. stunt. A P.R. stunt?! Do you think I'd want to look like that in front of all of you?!”

Celebrities are just like us — tortured and mortified of being perceived!