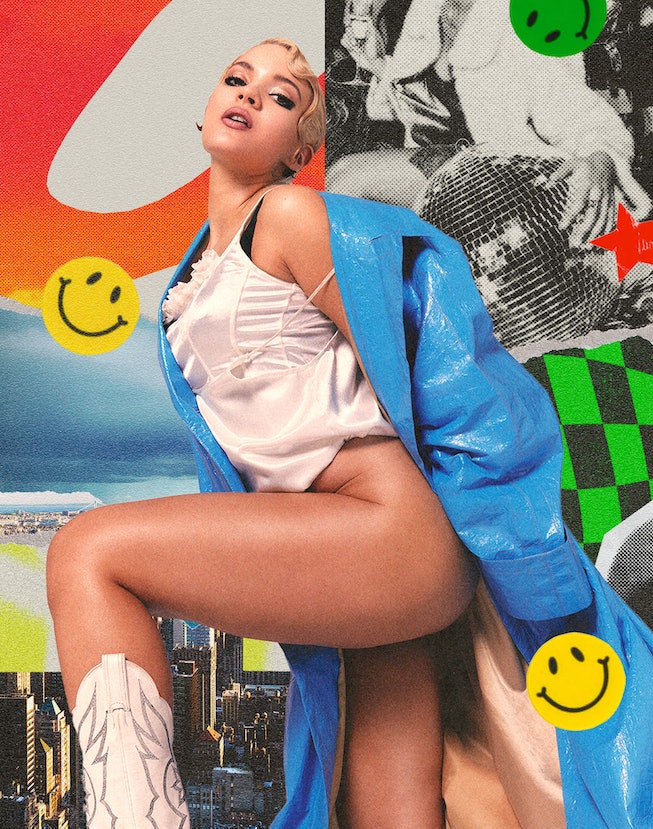 There’s no one way of coming out. In that spirit for Pride 2022, NYLON asked six queer musicians to share their coming out stories. In the as-told-to below, Swedish pop singer and songwriter Tove Styrke describes falling in love with her girlfriend, coming to terms with her queerness, and how it all manifests on her latest album, HARD.

Years ago, I hired a guitarist to play in my band, and we had a very awkward relationship at first. She and I just didn’t know how to act around each other. But over the years, after spending a lot of time on tour buses together, we became very good friends. One day, it dawned on me: I don’t just love this person, I’m in love with this person. So I did something I’ve never done and wrote a song for her called “Show Me Love” — a love letter to her about what I was feeling.

Growing up, I didn’t have a lot of role models for how I felt inside. I remember thinking I might not be straight, but then I would have crushes on boys and be confused: I can’t be gay because I like guys too. I just didn’t have the vocabulary. Today I would say I’m pansexual, but labels are tricky for me. Identity is so complex, it’s hard to find one word that encapsulates everything. For some of my friends, having the words to explain things has been life-changing, but choosing a label feels like such a commitment. Attraction is just about my dynamic with the other person. It doesn’t have anything to do with gender, and that took a long time for me to figure out, to find a way to be queer and be me.

It didn’t fully click until I started dating my girlfriend, Sanna. In 2020, I brought her to the fashion awards for the biggest fashion magazine in Sweden, and the article about me attending the red carpet with her was the most-read article on their website that year. A lot of people think I came out then, but I didn’t — people just assumed I was straight because I had boyfriends in the past. Had I known people were going to react that much, I might not have even brought her, because pulling someone into that spotlight is a little extreme. But I’m glad I did. If that’s such big news to people, then that’s what people need to see. And because it became easier for others to perceive me as queer, it became easier for me to apply those words to myself and not feel guilty — like I was taking up room in queer spaces that I shouldn’t because I had all the privileges of a straight person.

I never used to share anything about my personal life, but it’s important that people know we go through the same things, the same mess. My life is not elevated in any way because I’m a pop star. I was on a mission with this new album, HARD, to let go of my need to always be in control. I have a tendency to edit myself and make sure everything feels safe and perfect, but I wanted these songs to be straight from the heart. That has made them more queer, yes, but also more everything – more me, more relatable, more fun.

A song like “Free” is my own personal sexual liberation anthem. Being sexual is such a big part of being a human — unless you’re asexual — but I’m usually so self-conscious and scared of what people will think of me. So with that song, I just wanted to be unhinged and help myself feel more comfortable. I hope it helps some of my fans feel more comfortable, too.

It sounds cheesy, but a really good pop album lifts people up. When I was a lonely teenager living in Stockholm trying to figure out life, Lady Gaga’s Born This Way album was like a friend in my headphones. I used to ride the subway to the end and back just to be with the music. I felt seen. Gaga’s music felt like that, Robyn’s music is like that — it empowers you and makes you feel comfortable in your own skin, your own situation, your own life. If I can give somebody that feeling? That makes me really happy.

Tove Styrke’s Hard is out now.

NEXT UP
Entertainment
Blackpink To Release New Music In August
Entertainment
Marzz On Coming Out: "Put Yourself First And Be Selfish"
Entertainment
The Weeknd Announces Massive After Hours Til Dawn Global Tour
Entertainment
J-Hope's "More" & 9 Other New Songs Out This Week