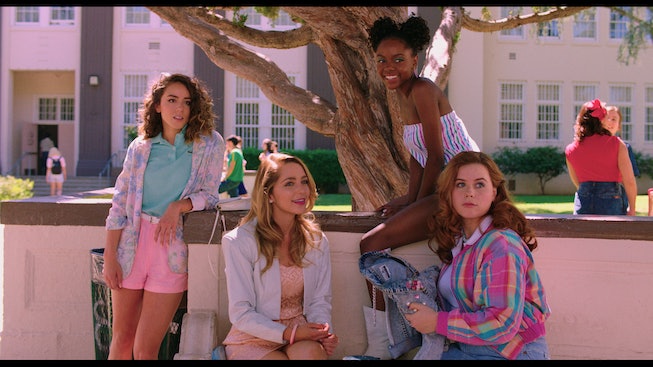 “Life was like a pop song,” Julie (Alicia Silverstone) tells her teenage daughter at the outset of the new movie musical Valley Girl. Julie is talking about her own teenage girlhood in the early ’80s, but she’s really announcing a glib excuse for a jukebox musical — and, specifically, for remaking the 1983 teen comedy Valley Girl as the kind of self-consciously hits-packed revue that has become a regular fixture on Broadway. It’s easy to picture Valley Girl playing there for a few months before making its real money as a touring company or popular high school musical property. Instead, writer-director Rachel Lee Goldenberg has brought it straight back to movie screens (or for most viewers, at-home screens; amid the coronavirus pandemic, the film will play a few drive-ins while reaching most of its viewers via on-demand rentals).

The first Valley Girl has, among other things, a killer time-capsule soundtrack anchored by Modern English’s “I Melt with You,” which plays nearly in full over a crucial montage and returns for an end-credits encore. That song is present and accounted for in the new movie’s litany of production numbers, but most songs from the ’83 original have been punted back to semi-obscurity in favor of a more traditional that’s-so-totally-’80s compilation. So when Julie, played as a teenager by Happy Death Day’s Jessica Rothe, chafes against the conformist expectations of her San Fernando Valley life, she does so to the strains of Cyndi Lauper, Toni Basil, the Go-Go's, and Madonna, among others. Even the less preppy crowd goes out of its way to sing stuff that people know; Randy (Josh Whitehouse), the punk Julie falls for unexpectedly, belts “Bad Reputation” with the help of his bestie (Mae Whitman). Fans of, say, offbeat one-hit wonder Josie Cotton will come away disappointed.

As ever, Valley Girl remains a simple opposite-attracts romance. Julie and Randy fall in love more or less at first sight, much to the chagrin of her popularity-conscious, shopping-obsessed friends (and her insensitive current boyfriend). The 2020 version adds in some melodrama to complement the outsize songs and choreography, as Julie is pressured to settle for a typical boyfriend, low-risk college, and future as a homemaker, while Randy feels restless about his band’s local-hero routine. Their counterparts in Martha Coolidge’s 1983 original show less ambition, though that movie’s slang-heavy, valley-accented dialogue scenes have an anthropological edge that the 2020 edition doesn’t bother to explore.

If it seems like 2020 is a strange time to remake a particularly era-specific 1983 teen movie, the filmmakers behind Valley Girl might well agree. The film was shot in 2017, and had a summer 2018 release date before it was indefinitely delayed, supposedly due to controversy surrounding co-star and YouTuber Logan Paul. (A two-year wait seems both like a harsh sentence for the moronic antics of one supporting actor and, at the same time, too short a wait for Logan Paul to somehow become tolerable.) Yet the curious timing seems to be part of this material’s DNA. In the original, Julie’s dad shows her photos of his hippie days, from before she was born — a sweet moment that overlooks how a high school junior in 1983 would have been born around 1966, which doesn’t exactly line up with her dad’s pre-family immersion in hippie culture (though maybe he was at the forefront of the movement). Similarly, the new movie wants to draw on Silverstone’s wink-wink California cred... which comes from her work in Clueless, a movie more than a decade removed from the 1983 of Valley Girl. It’s not impossible for Silverstone to play a decade older than her real age — nor is it exactly the cleanest continuity between pop-culture eras.

Individually, these details are head-scratchers. Put together and scored with pop hits, they converge into a kind of perpetual time-warp. Clueless opens with a cover of the 1981 Kim Wilde song “Kids in America”; the Valley Girl musical uses the same song as a mixed-tempo tour of a house party. Almost every song in the new movie has been similarly claimed by at least one other pop-culture entity: Freaks and Geeks made “Bad Reputation” its theme song; Moulin Rouge! made similar mashed-up use of “Material Girl”; “We Got the Beat” was used prominently as recently as a couple of months ago when Stargirl debuted on Disney Plus. Valley Girl has been re-conceived as a jukebox full of other jukeboxes.

By any music-snob metrics, this plundering of the ’80s greatest hits should come across as mercenary cynicism. Yet Goldenberg and her cast do have the beat, and assemble better production numbers than many splashier recent movie musicals. The hippie connection re-materializes when Valley Girl feels influenced by the colorful visual playfulness of Julie Taymor’s Across the Universe; the “Kids in America” number starts in reflective slow-motion, like Taymor’s take on “I Wanna Hold Your Hand.” Later, the movie takes on the considerable challenge of covering “Under Pressure,” a sequence that shows Goldenberg’s command of both unbroken shots and sharp editing. Valley Girl’s reconfigured playlist may be predictable, but it shifts around the action with streaming-ready fluidity. Several hits get compressed into a spirited aerobics mash-up. “Take on Me” takes romantic montage duties from “Melt With You,” which gets moved to the climax in an effective tribute to the first film. Throughout, the songs and Goldenberg’s staging provide exactly the kind of delightful contact high we’re supposed to expect from movie musicals.

Though its pleasures derive more from genre craft than hardcore music fandom, Valley Girl still depicts a moment where genre boundaries start to break down. This was true of the 1983 version, too, where the punk rebel (played by a young Nicolas Cage) actually landed somewhere between late-’70s punk and more contemporary New Wave. The 2020 edition is brighter and shinier (especially without the charismatic eccentricity of Cage), but the characters more explicitly yearn to break free from their constraints, and express themselves by blending pop, punk, New Wave and whatever else on hand, an approach mirrored by Julie’s fashion-designer aesthetic (a 2020 addition). The movie’s plasticity makes it flexible, and the material bends enough to accommodate some genuine feelings amidst the hit parade. Valley Girl is the rare jukebox musical where the high-spirited poptimism feels earned.