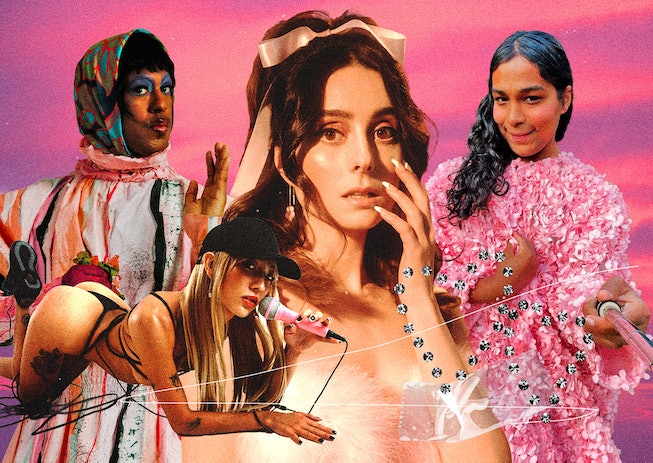 The concept of the It Girl is theoretically timeless — a powerful character who transcends the boundaries of time, space, and social class to become a larger than life figure — or simply, one with very good taste. But especially now, in 2022, each person’s definition of what truly makes an It Girl is bound to be a little unique. NYLON asked seven musicians, comedians, actors, and creators — all It Girls in their own right — what the moniker means to them. Read on for their definitions and their choice of an It Girl anthem, below.

Alisha Boe’s heartfelt performance in 13 Reasons Why captured everyone’s attention, but her latest role as a high school villain in Do Revenge proves she’s got range. With effortlessly cool style and the talent to match, Boe’s one of Hollywood’s brightest stars.

Before I thought [an] It Girl was someone who just looks like a muse, where they look really cool and everything was very cool. I think the It Girl now that I've come to understand, or I've come up with my own definition of, or what I want an It Girl to be, is someone who is just a nice person. Like Florence Pugh right now is very much an It Girl. What I admire in her is how kind she is and how transparent she is, and how you just want to be her friend. I think kindness is the biggest thing.

“It Girl” anthem(s): "Tyrone," Erykah Badu. That's a good one. I'm going to go with that one because that's [about] claiming your self-worth.

Calling all dolls! Hal Baddie aka Devin Halbal is one TikTok’s most exciting voices. Armed with her selfie-stick and a sparkling personality, Halbal’s musings on style, identity, and New York City come straight from the heart — never to be duplicated.

To be an It Girl means to be unapologetically yourself! It means to be a sweet person and always radiate vibrancy and inner beauty. It Girls are in tune with their inner voice and their feelings! It Girls are confident and that confidence intrigues the people around them. It Girls empower other women and girls. It Girls are trendsetters. ALL It Girls are full of love! Lastly, It Girls are icons, and icons live forever.

When we think of It Girls, Isabella Lovestory immediately comes to mind. The perreo pop star makes bilingual club bangers about fashion, kitten heels, being hot, and getting freaky. A large part of the appeal is rooted in fantasy, but isn’t that where the idea of an It Girl lies anyway? Watch out for her new album, Amor Hardcore, dropping on Oct. 5.

Being an It Girl means being carefree and being yourself without seeking anyone’s validation. Having a strong sense of identity and someone who’s fearless. Personally, I focus on nourishing the universe I created for myself, so that way I can feel confident and happy. I always try to take risks and stay fresh.

“It Girl” anthem(s): “Break stuff” by Limp Bizkit makes me feel ready to take on the world and feel hot.

Mary Beth Barone’s comedy chops were forged in the f*ckboy fire, in which her anthropological dating research culminated in the Comedy Central special Drag His Ass. She’s since continued on her brutally honest and poignant comedic journey with Silly Little Girl, in which she waxes on crucial topics like growing up in the ‘90s, her dating history, and, of course, The Cold War.

What an It Girl is to me... Okay... so it turns out an "It Girl" is hard to define! I think that's part of what makes people so obsessed with them. An It Girl is definitely someone who owns their power and is unapologetically themselves in every way. Confidence, distinct personal style, talent, a uniquely singular voice — an It Girl has all of these things and more.

When I was young, there was a much more narrow scope of who could be an It Girl. I love that my nieces are growing up in a more vibrant world where there are so many incredible It Girls who come from different backgrounds in all shapes and sizes with no one prescribed sexuality or gender identity. The term "It Girl" has evolved to become gender neutral (much like the term "girly") and I think that's important.

Singer, comedian, and performance artist Macy Rodman is already a superstar in Brooklyn. A longtime mainstay of the scene, the fashion student-turned-musician has held residencies, played festivals, and dazzled crowds with her theatrical live shows. Her music is built for the club, but fuels equal contemplation on trans anger, belonging, escapism, and the camp in this twisted world of ours. Her latest album, Unbelievable Animals, hasn’t left our rotation.

To me, an ‘It Girl’ is someone (gender irrelevant) who has a clear creative vision, has a finger on the pulse of culture, and somehow holds an aura of fun and/or excitement around them at all times.

The role of an “It Girl” is to synthesize ideas in fashion, music, art, and film into a living, breathing embodiment and put into practice ideas that were previously amorphous or theoretical. A good “It Girl” sets fire to old trends and clears a path for new ideas.

“It Girl” anthem(s): I immediately think of “It Girl” by Mister Wallace, a true “It Girl” anthem. Close behind I would put “Young, Fresh, N’ New” by Kelis, “I Heard It Through The Grapevine” by The Slits, and “The Aronofsky Method” by Macy Rodman feat. Pvssyheaven.

Stepping into a massive global fandom like the one Game of Thrones and its (technically a prequel) sequel series, House of The Dragon, elicits is no easy task. Everyone has an opinion on the franchise, from the big picture to the most minute details. But 22-year-old Aussie actress Milly Alcock has taken on her starring role as a young Rhaenyra Targaryen with ease and grace. Alcock holds her own as the lead character of the first half of the new season, as she plays a young woman similarly thrust into a position of power.

Someone who is unapologetically themselves.

“It Girl” anthem(s): “Stronger Than Me” by Amy Winehouse

Mykki Blanco has been doing the damn thing since 2012, amassing a resumé that includes co-signs from Blood Orange, Madonna, Ye, and Charli XCX. A trailblazer and dedicated experimenter, they most recently embraced their biggest stage yet, opening for Florence + The Machine on their 2022 fall tour.

When I think of an It Girl, I think of what would be considered the proto-It Girl, which would've been Truman Capote's swans. The swans were these women of high society, they had these very complex interior lives. I think of someone who's ambitious and multifaceted. I think about someone who is definitely a master of [their] craft while also having a certain likability and marketability.

When I think of an It Girl, I get a sense of someone that's a trend leader. Someone who I think is so talented is artist, curator, and director, Wu Tsang. To me, they represent a 21st century It Girl because they're such a talented director. They're able to direct these wonderful films, these wonderful theater pieces, but then they're also a world builder. They really offer so many narratives and I would consider them also to be a queer power player within the art world. I think the people that work under the online title of Slow Factory, the work that they do in making what people consider complex knowledge about environmental justice, bringing it to the masses in a way that people can really understand, would make them 21st Century It Girls.

NEXT UP
Culture
On The List (With Melissa Rich): How To Throw The Ultimate Apartment Party
Culture
Phoebe Dynevor Will Not Return for Bridgerton Season 3
Culture
Spice Girls May Reunite For King Charles’ Coronation
Culture
Caroline Polachek In KNWLS & More Party Photos You Missed
Style + Culture, delivered straight to your inbox.