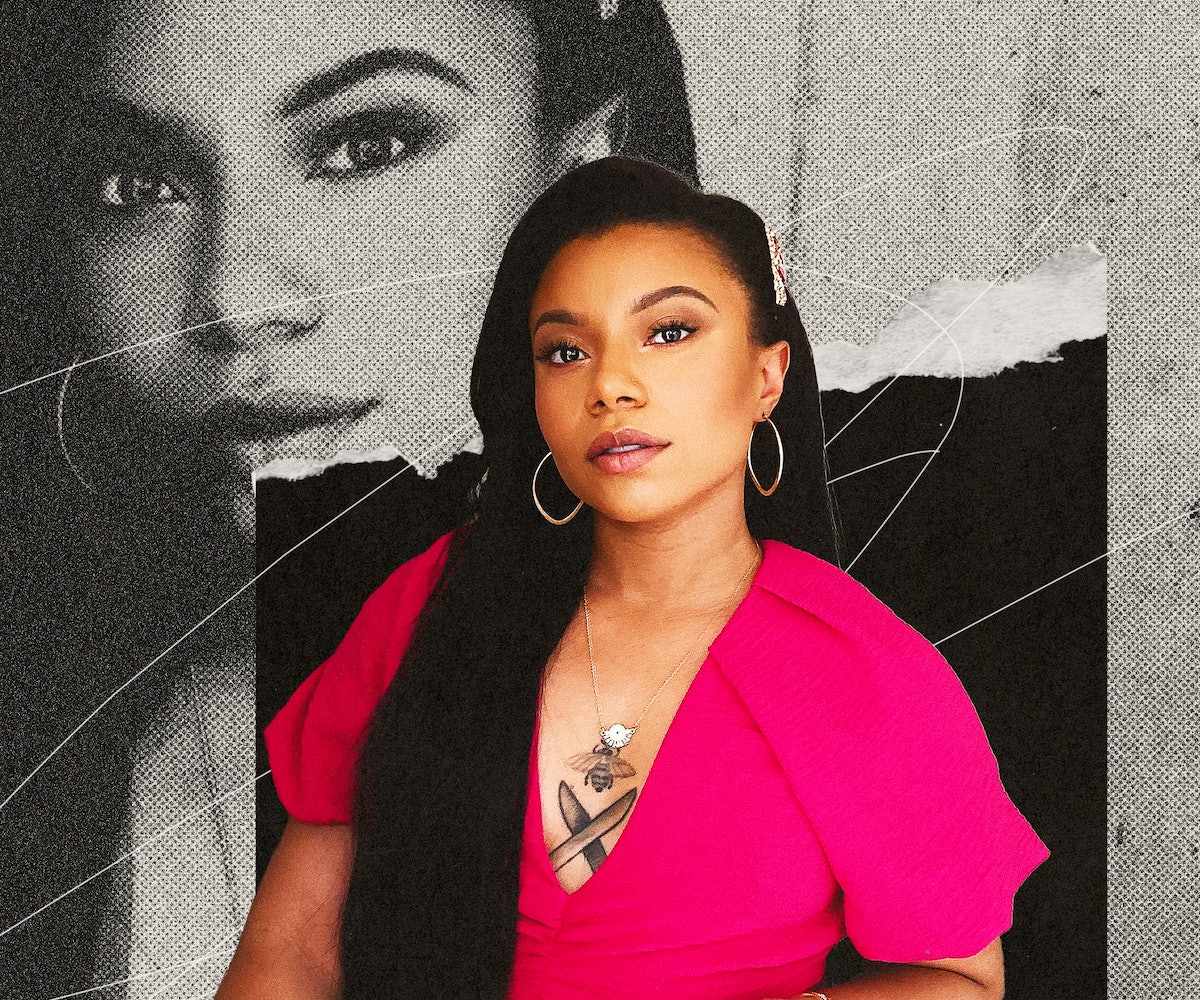 Major spoilers ahead for Season 3 of You ahead.

It’s been ten days since the highly anticipated third season of You came out, which means a majority of its fan base finished the series eight days ago. But if you’re one of the (few) people taking their time, rest assured: Shalita Grant understands. “People have lives, not everybody can binge the whole thing in one day,” the actress says. “That's 10 hours that you have to dedicate. It's a lot.”

This season, Grant, a Juilliard-trained actress and Tony nominee who previously stole scenes in Season 3 of Search Party, joins Joe Goldberg’s twisted world as Sherry, his new suburban neighbor with an internet-famous mommy blog that, to his dismay, befriends Love. At first, we’re inclined to despise every bit about her, from her gluten intolerance to her self-promoting vlogs. But as the season progresses (and Joe and Love’s crimes grow increasingly bloody), you can’t help but find yourself rooting for the influencer next-door.

Here, Grant breaks down her time in Madre Linda, including what it’s really like being locked in Joe’s cage.

Had you watched the show prior to being cast?

I was a fan of the show. It was my hotel companion show on my last jaunt out of the country. I went to Barcelona on a solo trip in December 2019. And I always have a companion show — that's what I call it — in a hotel.

I really love horror films and thrillers, and let me tell you why: they are usually the only genre that has a strong female lead. When I was auditioning, I had, like, 50-something auditions before I got my first job in Los Angeles, after being a Tony nominee in New York. My comfort genre was horror films because it's like, "Listen, homegirl only has one hand left. She's gone through all of this hell, and she's the final girl." So I would be crying, and drinking wine and like, "Yes, b*tch, you got to make it!" So that's why Netflix suggested You to me.

What was your reaction then when you got the call to audition?

I got the call after Search Party aired that July or something. Casting was like, "Yeah, they're really interested in you, but they have to make sure that you can play in this world, because Search Party was so different." I did a quick tape for them and got the job. So it was really the tops for me, that I was a fan of a show before I got it.

Knowing that, how did you approach the role, knowing she’d go from this unlikable stereotype to someone you end up rooting for?

The arc I have zero responsibility for, that's all the writers. But, in the playing of anything, for me, I'm just always striving for the authentic core. And what was so delicious about playing Sherry was I really got to play her from the outside in. Episodes one through four, there's no inkling that she has a real bone in her body. But the deeper and deeper you get into the show, the closer and closer you get to the core, and the more layers I got to show.

The thing that I love about Sherry's arc, and where people eventually [land], is that you realize, she's annoying, yes. She's narcissistic, yes. But, at the end of the day, Sherry's just really good at playing the game. She's just better at the game than other people, which is what makes her so annoying, but literally, there are really worse characters in this world. So take it easy.

Being a fan of the show, was it weird to suddenly be in that world, acting with Penn Badgley?

Being a fan of the show did not necessarily make me a fan in the way that people who are not in the business become fans of [actors]. In those first interactions [with Penn], I was curious about him as a professional, and as an actor, and how he would be on set. A lot of times, the number one on a show, depending on the soul that the actor has, they can take that and really make the experience of working a drag. It can be a real hellscape.

My first conversation with Penn was in the van, on our way to another location. I typically tend to just listen and mirror the energy, and I was really taken by how committed he was to talking about simple things, but simple things that are meaningful. I appreciated that he wanted to talk about his family and his new baby, and the day to day of having a new baby. I have to say of Penn, he was really the most responsible lead, on the most successful show that I've ever been on, and he's not an asshole in the way that you would think. "Billions of streams, why isn't this guy up his own asshole?"

As you mentioned, you also had the honor of being locked in Joe’s infamous cage. What was it like filming in there for so long?

It was terrible! We were in the cage for, I think, four or five days, but then there was a day of rehearsal. That was just like, "Oh my God." I mean, being so gross and having to stay in this really sparse space, you're at the bottom of the bottom emotional state. There were times when the props guys would come in, and they would be like, "Wow, it smells like humans in here." It's like, "F*ck you."

Was it cathartic that you got to completely trash it at the end, then?

I was like, "I'm never coming back here! F*ck these beans, all this flour." It was so much fun. We actually had to shoot the finding of the key three different times, because in all that mess, the props guy would put the key on top of something. And then I would jump down, and then whatever stuff was on the floor would rebury the key. And so there were a couple times where I was genuinely looking for the key. It was like, "Guys, I can't find it. Exactly where's the key here?"

I'm glad you put that together. Yes, Sherry is the final girl! And all she had to do was cut bangs. Her ending was so fitting. It's so on-brand, that they would make [this trauma] a brand and make money off of it. It says a lot about Madre Linda as a society that they metabolize this super crazy, traumatic event, and they all become even more successful.

Do you see a place for Sherry in season four? Maybe running into Joe in Paris?

I don't know. I have to say, I'm dedicated to being a character actress, and just playing as many different characters and telling as many different stories as possible. Season 4, I don't know. I don't want to say it's a stretch that Sherry and Carrie would be in Paris, because it's not. They could totally be in Paris, but I don't think that they would be looking for Joe.

For me, the biggest question about Season 4 is, will Marianne be into him? He's killed himself off in America, he's super toxic, and he don't have a lot of toes. How does she overcome that?