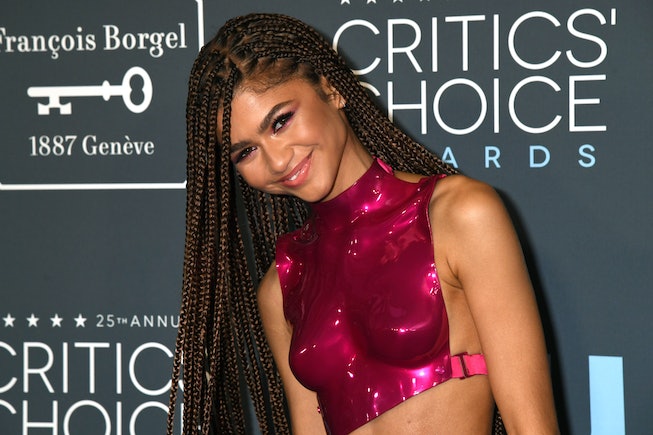 With an Emmy win and a year’s worth of patience under her belt, Zendaya is back in action on the Euphoria set. Fans of the beloved HBO show have been waiting with bated breath to find out the fates of Rue, Jules, Maddy, and the rest of the gang of drug-addled, trouble-stirring teens, and each day we get closer to the long-awaited sophomore season premiere.

I have to hand it to the Euphoria team — they’ve done a fabulous job of keeping their fanbase satiated during the endless production drought more commonly known as the year 2020. Show creator Sam Levinson teamed up with Zendaya and Hunter Schafer for two special holiday capsule episodes focused exclusively on Rue and Jules, and indie production powerhouse A24 recently dropped a multi-volume Euphoria book set, filled with special photos, scripts, interviews, and all the behind-the-scenes treats the super-fan could possibly desire.

But let’s get real here: nothing hits quite like a classic, tried-and-true on-set photo. Zendaya delivered the goods via her Instagram Stories, posting a photo of her co-star Angus Cloud, who plays Euphoria’s resident drug dealer with a heart of gold, Fezco.

“Missed this kid,” she wrote alongside the photo of Cloud posted up on his character’s kitchen counter. We did, too! Along with the precious photo of HBO’s sweetest drug dealer, Zendaya posted photos of the Euphoria crew, as well as the show’s soundstage. She kept it succinct: “Just being back here in general...missed it.”

NEXT UP
The Art Issue 2022
Natasha Lyonne Doesn't Want To Get Lunch With You
NYLON Nineteen
Kosar Ali Is A Met Gala Aficionado
Life
NYLON Daily Newsletter: November 23, 2022
Culture
Simona Tabasco Is the Lifeblood of The White Lotus