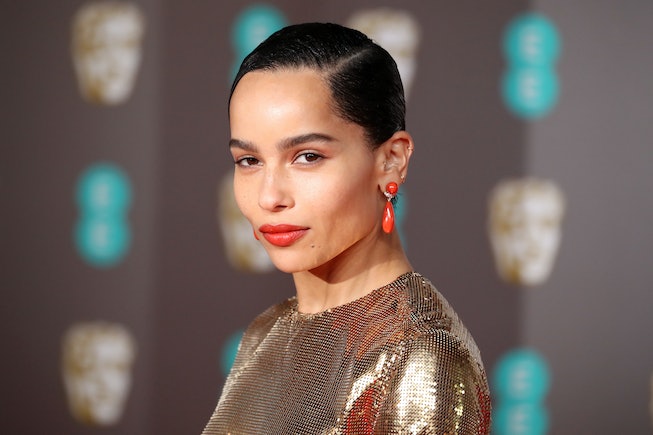 A little less than a year after Hulu unceremoniously cancelled her incredible series, High Fidelity, and a little less than a year before she’s set to step into Catwoman’s legendary heels in the upcoming Robert Pattinson-starring The Batman, Zoë Kravitz has set her next project: directing her debut feature, Pussy Island, which will star Channing Tatum as a tech billionaire.

Described in Deadline by Kravitz as a “genre thriller” with “comedy, drama, and real heart,” Pussy Island will follow Frida, a “young, clever Los Angeles cocktail waitress,” according to a plot description. (Though the character is currently uncast, Kravitz said she wrote the part as a dream role for herself, despite knowing she’d eventually give it to someone else so she could focus on directing.) With her eyes set on philanthropist and tech mogul Slater King (Tatum), Frida “skillfully maneuvers her way into King’s inner circle and ultimately an intimate gathering on his private island.”

But Pussy Island is described as a thriller after all, so this “journey of a lifetime” naturally takes a turn for the worse. “Despite the epic setting, beautiful people, ever-flowing champagne, and late-night dance parties, Frida can sense that there’s more to this island than meets the eye. Something she can’t quite put her finger on. Something that is a bit terrifying.”

Speaking to Deadline about the upcoming project — and more specifically, the deliberately provocative movie title — the actress-cum-director said, “The title means a lot of things. I started writing this story in 2017. As a woman in general, and a woman in this industry, I’ve experienced some pretty wild behavior from the opposite sex. The title was kind of a joke at first, this place where people would go, bring women, party, and hang out. The story evolved into something else, but the title wound up having multiple meanings. And it alludes to this time and place we claim to not be in anymore, in terms of sexual politics.”

“People are evolving and changing but there is still a bad taste in a lot of people’s mouths from past behavior,” she said, clearly hinting that this movie may be based on some rather familiar events from the last few years. “It’s a nod to that, but it’s also playful, and a really playful film in a lot of ways. I like that the title leads with that and has some heavy meaning beneath it.”

After securing her first writing credit on High Fidelity, an experience she describes as “an incredible education in storytelling,” Kravitz dove into this project, cowriting and developing the screenplay alongside lead Channing Tatum. The 21 Jump Street actor was Kravitz’s first choice for the tech billionaire role; he was “the one I thought of when I wrote this role,” according to her. “I just knew from Magic Mike and his live shows, I got the sense he’s a true feminist and I wanted to collaborate with someone who was clearly interested in exploring this subject matter,” she told Deadline.

For his part, Tatum reportedly was shocked to receive the offer, telling Deadline that his response after receiving the call from Kravitz was, “Wait, why are you thinking about me for this? No one gives me a chance to play a role like this.” (Tatum describes his character as “wild,” “psychotic possibly,” and “an extreme version of myself.”) Nevertheless, the actor said it felt “scary and liberating” to dive into these new waters — “just to be able to have a free conversation, where I was allowed to mess up, and say the wrong things.” He said, “It became less about men and women and on more of a human thing that will open people’s eyes.”

Though there is no release date set for the still-in-pre-production movie, Pussy Island is set to start filming early next year on an undisclosed tropical island, meaning a late 2022 release is not entirely out of the picture. If so, Kravitz is poised for a busy year of press — by the time she’s done promoting The Batman, which is set to release in early March, she will be gearing up to promote Pussy Island. But, hey, at least she’ll get to do so as a director for the first time — and we can’t wait.