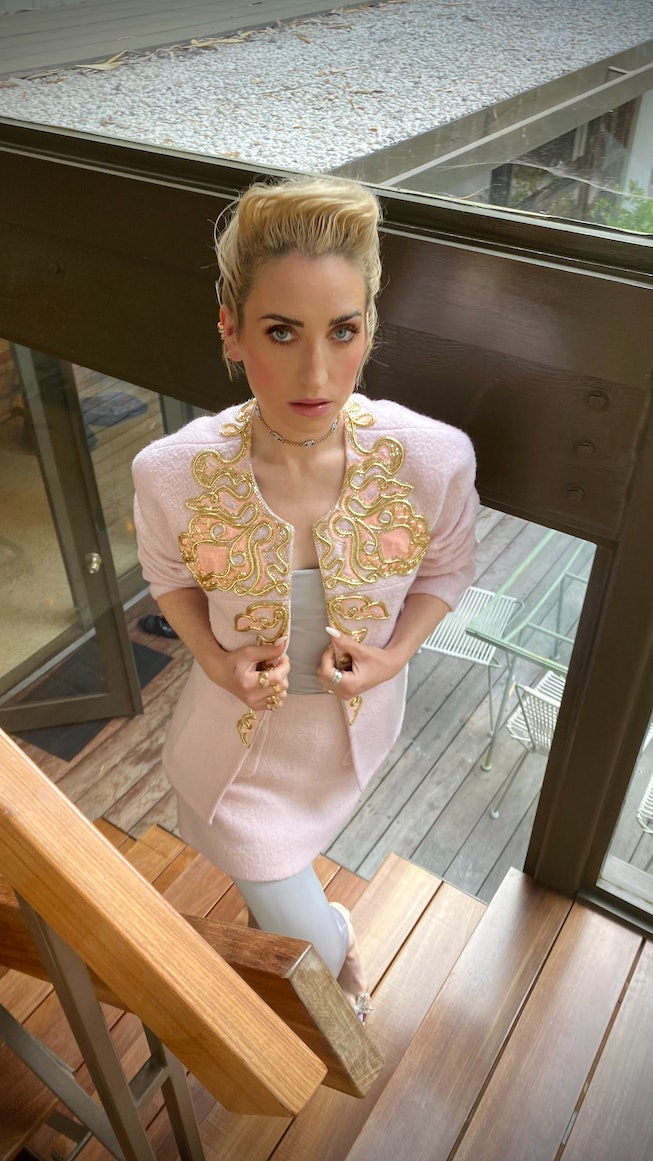 With many contemplating what the end of the world might look like, it’s no surprise that apocalyptic plot lines are finding their way into our favorite projects right now. Take How It Ends, the Sundance breakout written, directed, and produced by husband-wife duo Zoe Lister-Jones and Daryl Wein. The comedy follows a woman’s final night on earth as she tries to tie up loose ends and attend one last wild party. Lister-Jones stars alongside Cailee Spaeny — the two also worked together on The Craft, with Lister-Jones directing Spaeny — and the chemistry between the two is undeniable.

For the Los Angeles Neuehouse premiere of How It Ends, Lister-Jones pulled out all the stops. “I am wearing Chanel and I am madly in love with it,” she told NYLON before the event. “Chanel has been a house I have been in awe of since I was a little girl.”

She worked with stylist Erin Walsh to put her full look together — “an embarrassment of riches,” the director said of the many “magical Chanel pieces” she had to choose from. Ultimately, she landed on an updated twist on the classic Chanel tweed skirt suit, pairing one with gray Chanel leggings and a tank top underneath, with an updo to match by hair stylist Brian Fisher. For glam, it was all Chanel, all night; Lister-Jones said she and makeup artist Uzo “wanted to keep it natural with a hint of rock n’ roll,” using Chanel and Nars products to create a clean, dewy look.

As for the film premiere itself, Lister-Jones noted that How It Ends was “a true labor of love.” “This is a very special project to me,” she said before the premiere. “Tonight we get to celebrate all of our efforts during such an uncertain time with our friends, family, cast and crew. To finally be sharing it with the world is super meaningful.” Here, an exclusive look at how she got ready for the show:

“I gotta keep it one hundred with Chanel across the board. I also gua sha to keep shit tight.”
“I have to shout out Brian Fisher for my sweet sweet up do, and for giving me life with a new peroxide me.”
“The shoes are Amina Muaddi, and they’re like some legit Cinderella shit.”
“I had so many magical Chanel pieces to choose from, it was an embarrassment of riches.”
“I actually find the hair and makeup process incredibly relaxing and my team does such a wonderful job boosting and bolstering me before an event.”
“The playlist is also key. V into the new St. Vincent record. And the new Vince Staples.”
“Chanel has been a house I have been in awe of since I was a little girl.”
“Tonight we get to celebrate all of our efforts during such an uncertain time with our friends, family, cast and crew.”
“To finally be sharing [How It Ends] with the world is super meaningful.”
NEXT UP
Fashion
These Comfy Bras Under $30 Look Awesome With Anything
Fashion
Getting Ready With Richie Shazam For Her Directorial Debut
Fashion
DL Eyewear’s New Sunglasses Are For The Schitt’s Creek Fans
Fashion
FAMU’s Marching 100 Performed At Louis Vuitton Men’s Spring 2023 Show