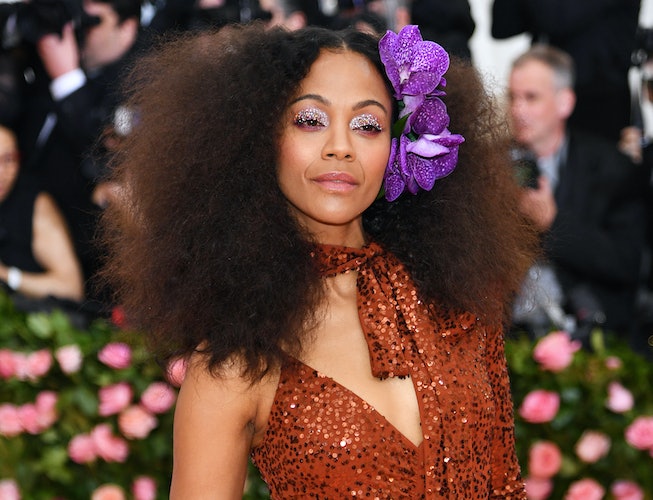 In 2016, I wrote a piece about the egregious casting of Zoe Saldana in the 2016 Nina Simone biopic Nina. Known as the High Priestess of Soul, the incomparably talented singer and activist Nina Simone was revered for many things, but most importantly, for the pride she held in her own identity — a dark-skinned Black woman that offered no apologies about her non-Eurocentric features. Which is why, perhaps, the casting of Zoe Saldana, a very light-skinned Afro-Latinx actor, upset so many. There aren't many dark-skinned Black women Hollywood would greenlight an entire film for, so when we finally do get one, why can't the role go to a dark-skinned Black actor? That Saldana's skin was darkened and prosthetics were used to give her a larger nose certainly didn't help the matter. But now, more than four years after the release of the critically panned film (check out that 2% Rotten Tomatoes score!), Saldana is finally expressing regret for her decision to portray the beloved artist.

The apology came yesterday during an Instagram Live chat with Pose co-creator (and future 81 Words showrunner) Steven Canals. As two Afro-Latinx people, they began the Live by sharing stories about what it's been like facing racism while navigating Hollywood.

Canals then hits Saldana with a hard question: "I know that this is a sensitive topic for you, but obviously, a few years back, there was a lot of controversy around the decision that you made to play Nina Simone," he begins. "At the time, there were a lot of questions around blackface and darkening skin and prosthetics. I wonder what is your relationship with that choice now. How has the process of evolution... changed not only the roles that you're taking today but how it makes you reflect on that decision?"

After taking a brief but deep breath, Saldana says, "I should have never played Nina. With the leverage that I had 10 years ago — which was a different leverage, but it was leverage nonetheless — I should have tried everything in my power to cast a Black woman to play an exceptionally perfect Black woman."

"It's growing. It's painful," she continued. "I thought back then that I had the permission because I was a Black woman — and I am. But it was Nina Simone, and Nina had a life and she had a journey that should have been and should be honored to the most specific detail because she was a specifically detailed individual — about her voice, her opinions and her views, her music and her art. And she was so honest. So she deserved better."

"I know better today and I'm never going to do that again. Never. I'm learning," the actor concluded.

I certainly hope Nina Simone gets the real biopic she deserves. But in the meantime, I'll just be revisiting Netflix's excellent (Oscar-nominated) documentary What Happened, Miss Simone?

Watch clips of Zoe Saldana apologizing below or head here to check out the entire hourlong conversation.