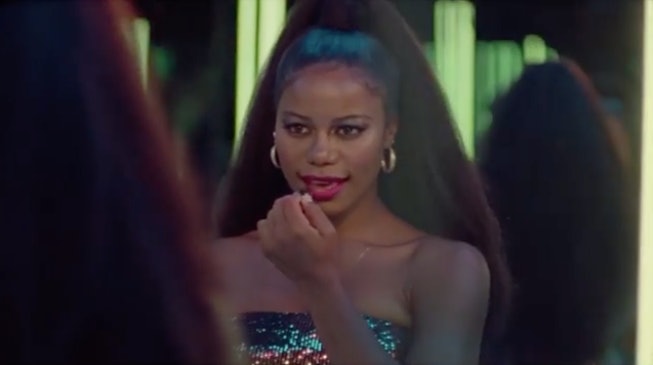 Back in January, at the Sundance Film Festival (the only 2020 film festival to go according to plan), there were a number of notable film premieres, including the heartbreakingly intimate Never Rarely Sometimes Always and the sci-fi-tinged comedy Palm Springs. But none were met with the same excited fervor as Zola, the so-called "first movie based on a viral Twitter thread." Inspired by the crazy story told in bite-sized tweets by "Zola" (real name Aziah King), the film follows the titular character as she travels with a girl she just met to Florida for what she thinks will just be a harmless stint making money in the strip clubs, but soon reveals itself to be an attempted sex-trafficking scam. The film was met with packed, standing room-only screenings and favorable reviews, which only increased the excitement for its general release. But unfortunately, with the onset of the COVID-19 pandemic interrupting most film release schedules, the film's release was put on hold. Today, for the first time since its Sundance press run, A24 offered a peek of what to expect from the upcoming film — and it looks fantastic.

Directed by Lemon's Janicza Bravo based on script penned by her and Slave Play playwright Jeremy O. Harris, Zola follows King's tweet thread pretty closely, using only slight embellishments to make it a suitable on-screen viewing experience. The film's cast includes Hit the Floor's Taylour Paige as the titular Zola; The Girlfriend Experience's Riley Keough as Stefani, the fellow stripper that convinces Zola to accompany her on a spontaneous trip to Florida; Succession's newly-minted Emmy nominee Nicholas Braun as Stefani's pushover boyfriend Derrek; and Fear the Walking Dead's Colman Domingo as an intimidating pimp named X. Mica Levi, who previously composed music for Jackie and Under The Skin, will handle the score.

In the 42-second clip posted to A24's official Twitter and Instagram accounts, Zola and Stefani stand in front of a mirror doing their makeup. As the words "On October 27, 2015, @_zolarmoon tweeted the following..." pop up on the screen, Paige's voice can be heard in a voiceover saying, "You wanna hear a story about how me and this bitch here fell out? It's kinda long, but it's full of suspense." (The line is plucked directly from the first tweet in King's Twitter thread.) Soon, some more text pops up: "Most of what follows is true."

Unfortunately, this clip does nothing to quell our excitement for the release of Zola, particularly since it concludes on a winking nod to the current uncertainty of our filmgoing future. After first saying "Coming This...," the word this deletes and is replaced by next. Then, next is deleted, and it settles on "Coming Soon." How soon? Well, that's something you'll have to take up with the powers-that-be at A24.

Check out the clip below. Zola hits theaters...well, we still don't know.

NEXT UP
Culture
Jeremy Allen White Has At Least Four A24 Scripts on His Desk
Culture
Aubrey Plaza Directorial Plans Involve Filling The “Female Tim Burton Spot”
The Art Issue 2022
True Life: My Partner Is Obsessed With NFTs
Culture
An Exhaustive Breakdown Of The Balenciaga Controversy